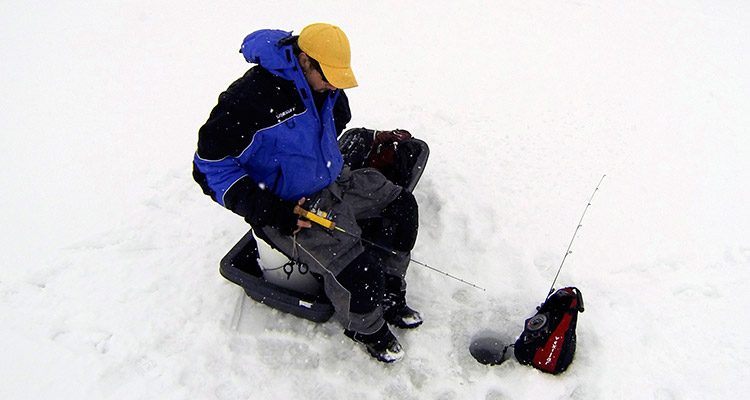 There are some major advantages to having a sonar unit on the ice. You can easily determine bottom depth and locate drop-offs, holes, and humps that can concentrate fish in winter. A sonar display can also help you locate hard and soft bottom areas and the important transition zones between them. Sonar also shows vegetation, another fish attractor in winter. Finally, you can see fish and your fishing lure with sonar, and by watching a fish’s reaction to your lure you can entice it to strike.

There are many choices in sonar units at a range of price points. Basic units start at around $300, while feature-loaded combo units that include underwater video can cost north of $1,000. Most high-end flashers and sonar/chartplotter combos fall in the middle of this price range.

Given the many different features available and the spectrum of sonar categories, it’s difficult to do an apples-to-apples comparison of all ice-fishing electronics. Instead, ice fishermen should choose between the two main categories of portable sonar, which are flashers and liquid crystal display units (LCD). With similar starter costs, whether to buy a flasher or a LCD unit is hotly debated among ice anglers. Both styles have pros and cons, but both will help you catch fish. Then, it’s up to the individual to decide which basic and advanced features are worth having, and whether to select a standalone sonar unit, a sonar/chartplotter combo, or a sonar/underwater camera package for ice fishing.

There’s no shortage of options, and there is no perfect unit for every angler. Consider your budget, target species, style of fishing, and comfort learning new technology when shopping for a unit. And, keep in mind that any portable sonar is better than none—so be confident knowing that whatever unit you choose, it will help you put more fish on the ice this winter.

A flashers is the simplest option in portable sonar units but can be a very powerful tool in the hands of an ice angler. Humminbird, MarCum and Vexilar offer flashers with circular displays that represent the water column. Just beneath the ice surface is roughly 12 o’clock on the dial, and depth increases the farther away the signals occur in a clockwise direction. A signal’s depth is determined by cross-referencing numbers on the face of the unit.

Flashers have multicolor displays, and each color represents a different strength of return signal. Pallets range from three to six colors, depending on make and model.

As an example, in Vexilar’s three-color pallet, green is the weakest, orange is moderate, and red the strongest signal.

Interpreting a signal is an important skill for an angler using a flasher. For instance, a strong red signal is returned when an object is in the center of the sonar cone. So, when a strong red signal appears at nearly the same depth as your bait, this tells you that a fish is close and very interested. On the flip side, weak signals represent objects on the edges of the sonar’s cone. When a fish returns a weak green signal, it’s off to the side of the ice hole and needs coaxing to call it in closer to the lure.


PLUS: Proven track record
Flashers have been the standard fishfinder for ice anglers for decades. They are durable and reliable, and the technology has been refined and improved upon, thanks to countless hours of field use. There are many models to choose from, along with plenty of accessories.

PLUS: Better on batteries
Low battery draw is another flasher perk. An angler can easily fish all day with a single 12-volt battery. Two days isn’t uncommon, but it is not recommended. A battery should always be charged after an outing for best long-term performance.

PLUS: Instantaneous display
A flasher displays sonar data in real time. This means when you jig your lure, it moves instantaneously on a flasher’s display. The result is immediate feedback on a fish’s movements as it moves closer, or away, from your lure. Watching this unfold in real time helps customize a jigging presentation to coax a fish to bite.

Early generation LCD screens became sluggish in the cold, making them unreliable. Today’s units are responsive, fast, and perform well in cold conditions due to internal heating technology. Battery life also used to be an issue, but newer LCDs can go all day in frigid temperatures without issues. Battery life varies widely among units, however, and can be affected by screen size and settings. LCDs are available in color and grayscale displays. There are a few reasons some anglers prefer an LCD sonar on ice.

PLUS: 365 days a year
Year-round use is a big factor. I know several anglers who remove their 5-inch Lowrance or Humminbird displays from their boats to use them on the ice in winter. A conversion kit, consisting of a soft case, hard-plastic base, battery, power cable, and an ice-fishing-specific transducer make the soft-water to hard-water switch easy.

Owning a unit that can perform double duty appeals to many anglers as a cost-saving measure. Familiarity is another perk. Also, many LCD sonar units also feature GPS/chartplotting capabilities.

PLUS: Scrolling history
Humminbird, Lowrance and MarCum LCDs provide multiple views. A multicolored flasher-style view is one popular ice-fishing option. Many anglers prefer this screen when jigging schooling fish such as yellow perch.

The scrolling chart display is also popular on hardwater because it captures a temporary history from right to left—something a flasher cannot do. Seeing history is useful for adapting tactics to fish mood. It’s a big reason many prefer this view for lake trout, walleye, and other species where cat-and-mouse jigging tactics are needed to trigger a bite.

Here’s how scrolling history can improve your jigging game. Let’s say you’ve attracted a fish and had it chase your lure, but it didn’t bite. The history shows how high the fish came off bottom, the lure’s maximum height, and the pattern of your jigging stroke. The next time an interested fish shows up, you can learn from this history to try something different and, hopefully, get a bite.

PLUS: Real time sonar
While history is useful, remember that it’s past tense. When jigging and working a fish, watch the vertical band on the far right of the screen for the freshest data. (In Humminbird units, this is called the Real Time Sonar (RTS) window.) In some units, this window can be set to a narrow or wide position. Depending on your preference, this band may be large enough, but be sure to consider this feature when shopping.

MarCum’s ShowDown series includes LCD units that feature a rectangular vertical display that mirrors the water column. It’s similar to a real-time window on a scrolling chart display. Your bait and any fish show up as black or gray bands in the vertical display window. It’s a simple, intuitive display for ice fishing.

There’s a lot of debate about whether or not LCD units display returns in “real time” and if they’re as responsive as flashers. Older generation LCDs were sluggish and lagged in the cold, but today’s units are different. Most new models keep up with flashers.

PLUS: Multiple views
Many LCD units offer multiple views. In addition to standard open-water LCD view combinations, there are some noteworthy ice-fishing-specific units. For instance, the MarCum LX-6 can show multiple water-column views on a 6-inch screen. An angler can custom-define the display, choosing the following: water column vertical, vertical zoom, flasher dial, traditional widescreen gray and all combinations. As another example, Lowrance’s Elite-4x Ice Machine gives anglers many view options, including a split screen showing both a flasher and scrolling sonar.