How to Cook Octopus

Living Off The Land (& Sea) 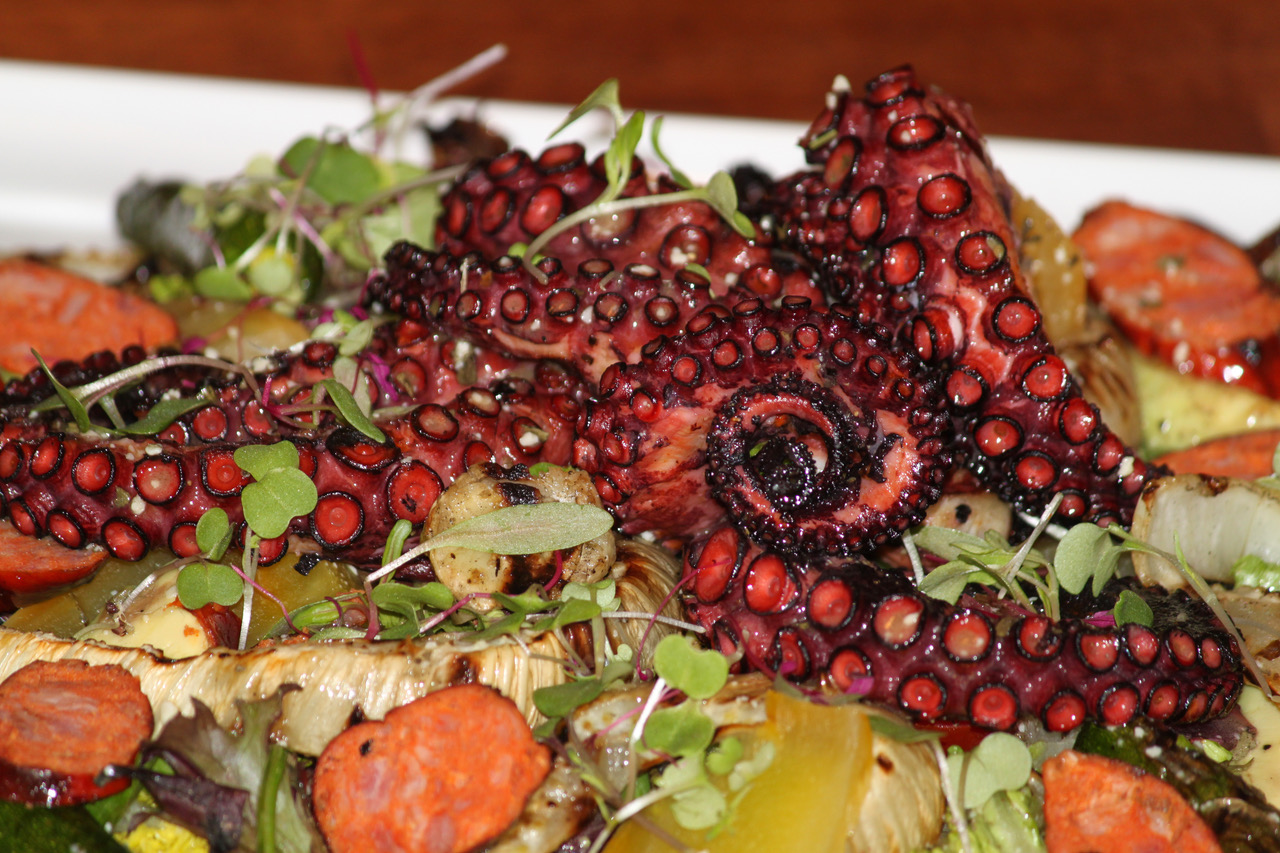 The act of going to a fish market in the winter to pay for fish used to instill me with the agony of defeat. It rattled my ego and bruised my soul. But, I have since come to grips with it. I now enjoy spending some time–and money–with a reputable fishmonger. What I like most are the exotic specimens that can be found there, and the opportunity to dine on delicious creatures I can’t capture locally myself.
Perhaps my favorite discovery has been the noble and delicious octopus.

Cooked properly, octopus is fork-tender. It has a mild, succulent flavor that melts in your mouth. If you tasted it blind-folded, you might think you were eating a tender piece of fatty pork. Perhaps my favorite parts are those little suction cups on the tentacles. They pop in your mouth and add a slight element of crunch. So good! If you haven’t already, give octopus a try … you will thank me! It can be a bit of a challenge to find them, but if you call around, more fish markets are keeping it in stock.

If your local fish market doesn’t carry it, chances are good they can at least order it for you and have it available the following day. Octopus typically comes frozen and already cleaned. (It actually benefits from being frozen, which tenderizes it.) It is also reasonably priced – the market I get it from sells it for just $4.99 a pound. I should warn you, however, that octopus shrinks dramatically when cooked and typically loses over half its initial weight. I usually buy at least 1.5 pounds for each serving.

Unlike their relative the squid, octopus is better suited to cooking low and slow, rather than fast on full blast. Cooking times can vary, but a general rule of thumb is to gently simmer it for at least 45 minutes for every two pounds, but sometimes it takes even longer. I like to use the poke test. Take a fork and insert it where the head meets the tentacles. If it slides in and out easily, your octopus is ready. It’s kind of like cooking potatoes: they should be fork-tender when done. The final step is perhaps the most important. Remove the octopus from the heat, cover it, and allow it cool, submerged in the cooking liquids, until it reaches room temperature. It will re-absorb liquid as it cools, resulting in a tender and succulent finished product.
Once fully cooked and cooled, octopus can be used in many different ways. You can simply toss it with olive oil, lemon juice, and a pinch of salt, and eat it as-is. It can be incorporated into a risotto or added to pasta sauce. Perhaps my favorite way to finish it is to give it a quick toss on a hot grill and serve it atop a nice salad with grilled vegetables. Delicious!

Step 1: Put the first seven ingredients in a heavy stockpot and add just enough water to make sure your octopus is completely submerged. Cover the pot, and simmer it on low heat for around an hour and a half, then check for doneness. Once the octopus is fork-tender, turn off the heat, and allow it to completely cool while still submerged in the cooking liquids.

Step 2: While your ‘pus is cooking, prepare your grilled vegetables. Slice them up, toss them in olive oil, and season with salt and pepper. Grill on high heat until done, and allow them to cool. Once the octopus is completely cooled, chop it into quarters, and toss them in a liberal amount of olive oil, and give them a light dusting of salt. Grill on high heat for 2 minutes, flip them, and grill for one more minute. Do not overcook it. You basically just want to heat it back up and add a touch of char.

Step 3: Now it’s time to assemble your magnificent octopus salad. Put down a layer of salad greens, and add the grilled vegetables. (I like to also add some slices of grilled linguica.) Top off the salad with our wonderful grilled octopus, and give the whole dealio a drizzle of good olive oil. Serve it “family style” with some good, crusty bread. It will melt in your mouth!

Octopi of the Northeast

There are two species of octopus in the Northeast.
Bathypolypus arcticus, the North Atlantic octopus, is a deep-water species found along the edge of the continental shelf in water from 700 to 2,000 feet deep. Not much is known about these little guys, and there is no commercial fishery for them, primarily due to their small size. The average adult is only about three inches long and weighs less than two ounces. Their range includes the entire East Coast, from Florida to Iceland.

We are also on the very northern end of the range of Octopus vulgaris, the common octopus. This is the same species you are likely to encounter at the fish market, although most commercial fishing for them is done in the Mediterranean Sea and off the northwest coast of Africa.

The common octopus can grow to three feet long and attain a weight of over 20 pounds, although most specimens are in the 2- to 4-pound range. They typically inhabit inshore waters and prefer rocky areas. The creatures are primarily nocturnal and spend the daylight hours in hiding. They are also venomous, and paralyze their prey with a toxic poison that’s secreted from their saliva. If you are ever lucky enough to find one, handle with care!

While they are uncommon north of the Carolinas, the common octopus’ range appears to be spreading northward. On The Water contributing writer, Christopher Paparo, has found juveniles off Long Island, and has seen adults brought in by ocean trap fishermen. There have also been documented captures of adults on Cape May’s artificial reefs.