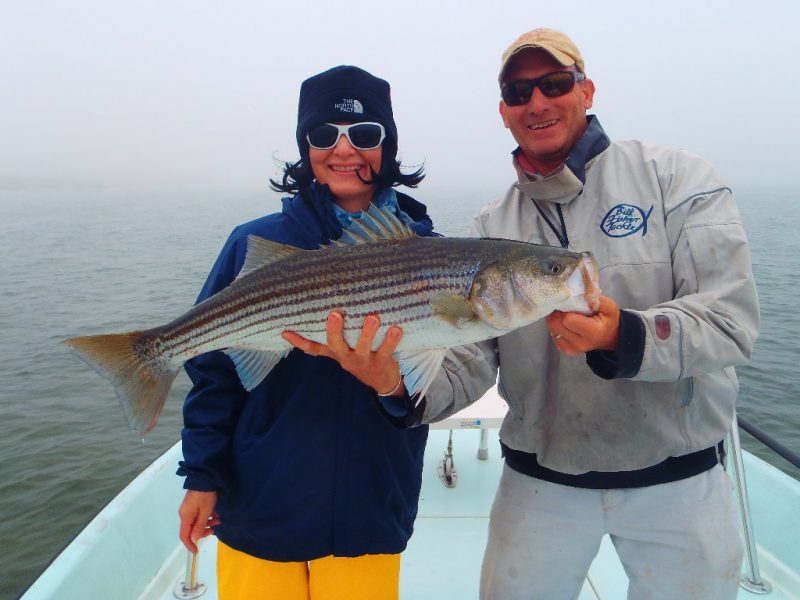 Most of our striped bass are spawned in Chesapeake Bay, and most of those come from the waters of Maryland.  For that reason, Maryland’s striped bass young-of-the-year index has generally been the best future predictor of the future health of the stock.

Thus, folks who care about the striper’s future have been rightly concerned by the fact that the index has been coming in below average for most of the years in the past decade, with the 2012 index the lowest in more than fifty years.

The one bit of good news came in 2011, when a dominant year class was produced.

You would think that the folks who manage bass down in Maryland would be doing whatever they can to help those 2011s live long enough to recruit into the spawning stock, something that should happen in 2017 or so.

But if you thought that, you would have been wrong.

Maryland has a long history of killing immature bass (back before the collapse in the 1980s, a legal “pan rock” was just 12 inches long), and it doesn’t look like they’re planning to reform any time soon.

Right now, they’ve got the 2011s fixed dead in their sights. It started last fall when, despite the steady decline if the spawning stock biomass, the state declared its intention to increase the harvest by 14% in 2014.  I suppose that went over well with the folks who make their money off the heads of dead fish, but folks capable of thinking about the long term—which, in this case, is anything past the current season—figured out that beating up on the only solid year class in the last decade was probably a dumb idea.

Coastal Conservation Association Maryland made a really solid effort to prevent such foolishness from going forward but, in the end, the chance of plucking more dollars from the heads of dead bass proved far too attractive for the state to change course.

So this year, the Maryland folks are killing more bass, even though a peer-reviewed stock assessment that was presented to the Atlantic States Marine Fisheries Commission last October and updated in December made it clear that, although the stock was not yet overfished, the target fishing mortality levels had been exceeded and the spawning stock biomass had been below target levels since 2006.

Amendment 6 to ASMFC’s striped bass management plan says that “If the Management Board determines that the fishing mortality target is exceeded in two consecutive years and the female spawning stock biomass falls below the target in either of those years, the Management Board must adjust the striped bass management program to reduce the fishing mortality to a rate that is at or below the target within one year.“

That seems pretty clear, but not if you’re Thomas O’Connell, the marine fisheries director for the State of Maryland.

Instead of making meaningful changes to reduce fishing mortality to the target level, O’Connell decided that he’d rather make changes to Amendment 6, and allow harvest reductions to be phased in over three full years, instead the one year currently required.

As too often happens at ASMFC, it was a matter of elevating short-term economic gains over the need to conserve and rebuild the stock.  At the May Striped Bass Management Board meeting, O’Connell said

Not everyone on the Management Board shared that view. Paul Diodati, the state fisheries director from Massachusetts, eloquently opposed O’Connell’s approach, correctly noting that

“We’re actually working off the tenets of Amendment 6, which are pretty clear about what this board is supposed to do.  We’re not supposed to wait until we fall down well below the levels that [Thomas O’Connell is] suggesting.  We’re supposed to take an action now.

“It is always difficult when we have to make a cut, especially when our fisheries aren’t completely falling apart, but with striped bass we took a very deliberate approach to how we were going to react to and address changes in stock condition.  This is the change that we identified many years ago as a point in time when we’ll take a serious action to reduce fishing mortality.  We’ve reached that.  In fact, in my belief we have gone well beyond the time that we allowed ourselves to take this action.

“I think that any further delays is going to hurt the credibility of the commission.  It is going to completely tarnish the integrity of the Striped Bass Management Plan, which I think we’ve worked really hard to maintain as a top-notch managed program.  I don’t think that’s our intent, but I’m afraid that would be the result of delaying action on this…”

“I think at the end of the day if we just decide we’re not going to follow through on what our commitment was last year to be well on our way to recovery and implementation January of 2015 and come up with anything that is going to dilute the direction we’re going, I think we will totally lose the credibility of the public…There is a lot of emotion out there; and to do anything other than what we committed to do, we’re going to have mud all over our face and we’re going to embarrass ourselves…”

However, Tom Fote, governor’s appointee from New Jersey, was quick to jump on the O’Connell bandwagon, trying to discredit Augustine with the argument that

Although, in the end, the facts spoke for themselves, and Diodati was clearly correct.  When ASMFC adopted Amendment 6, it made a covenant with the public to take management action when a trigger was tripped.  Should the Striped Bass Management Board ultimately approve a three-year phase-in of the reduction, it will have violated the public trust, and demonstrated that its word is not to be trusted.

There’s no doubt that Maryland is going to work hard to make that happen, and in the end, it’s easy to understand why. The 2011 year class won’t recruit into the coastal fishery until 2017.  Until then, Maryland and the other Chesapeake fisheries will have them to themselves.

So why does Maryland want to kill so many striped bass?

As O’Connell said, for “socio-economic” reasons. Which is the nice way of saying that it’s all about the almighty buck, and someone trying to squeeze a little more blood from the stone before casting it aside.

Maryland’s commercial sector killed 2,524,181 pounds of stripers in 2012 (compared to the 1,445,187 pounds landed by its anglers), and it has a big charter fleet that puts dead bass high on its list of priorities, killing  46% of the entire recreational harvest. O’Connell is trying to put a little more money in their pockets today, rather than trying to restore the stock—and so putting more money in their pockets tomorrow.

Maryland’s staunchest allies on the Management Board, Tom Fote of New Jersey and Rick Bellavance of Rhode Island (who said “…from the folks that I speak to in our neck of the woods, we don’t see a problem”), don’t seem to have much constituent support.

So it looks as if Maryland officials have taken a position that is not supported by the public at large, by Amendment 6 to the management plan nor by the stock assessment.

Yet they continue to oppose needed conservation measures.

Which just shows, once again, that so long as there is money to be made, there will always be someone trying to do the wrong thing at ASMFC.