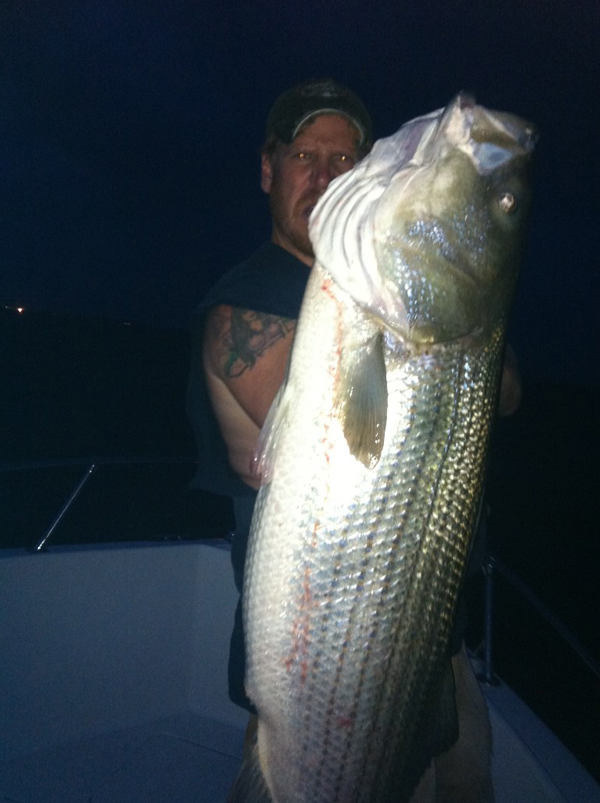 Greg Myerson has nearly done it again. Last night, Greg headed out with his cousin on Long Island Sound and landed a monster 73.75-pound Striper to take 1st place in the Striper of the Year, this week’s Boat Division and July’s Boat Division categories. This catch was just 8-pounds shy of his 81.88-pound world record striper caught in 2011. Here’s his own account of this amazing catch:

“I was out with my cousin Mike Emmerich testing some soon-to-be patented bucktails with rattles and stinger hooks that Fish Call Co. is coming out with, a new company owned by myself and Guidessecret Tackle owner Capt. Frank Crescitelli. My cousin talked me into fishing on his boat, which I never do because I feel naked without my instruments and spots to refer to. We were three waying 1 1/4 ounce rattle bucktails with rattling sinkers. Mike hooked a good fish and was fighting it, so I went to reel up and get the net when I got slammed by this monster bass. The fish ran almost 200 yards and was spooling me. My stomach turned when I felt the knot that held my new Cortland 50lb camo braid to the backing slide under my thumb and ting on every eyelet on my Lamiglas rod that I just designed for them. Mike got his fish in alone and then said what do you want me to do for you? I yelled to the 2 boats next to us to tell them my fish was under their boats so they reeled up. We started the boat and ran down the fish. Great night!”

Congratulations to Greg on this great catch, we look forward to hearing more about it.

Remember, each week in the Striper Cup is it’s own tournament with tons of weekly prizes on the line and while it looks like Greg has locked up this week’s Boat division winner, there’s another chance to win starting each Sunday. If you’re still interested in participating in this year’s Striper Cup and haven’t signed up yet, it’s not too late: Click here to sign up today.