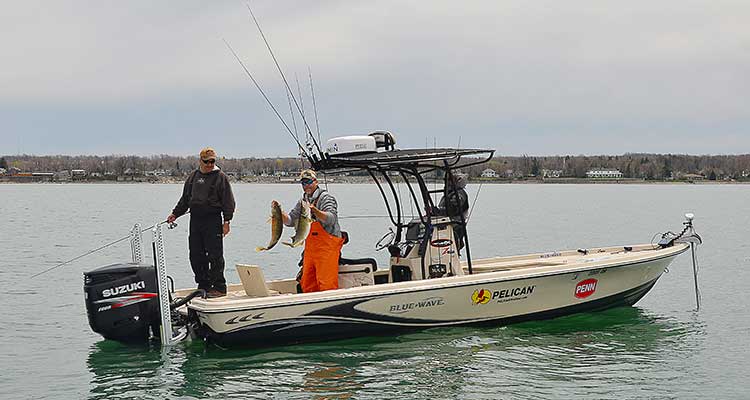 My friend Lou has a knowledge of New Jersey’s largest lake, Lake Hopatcong, like few others. Lou uses vertical presentations in cold water to catch deep or suspending fish when other anglers are struggling to get bites. A few years ago, I was lucky enough to join him and get a first-hand look at his coldwater jigging tactics.

Lou and I left from his slip at Dow’s Boat Rental in the late morning, and he began to set up short, slow drifts over main lake points and underwater structure, targeting anywhere from 25 to 40 feet of water. We didn’t have what you’d consider great fishing conditions—bright bluebird skies and a stiff northwest wind let us know a cold front had just passed. With medium-action rods and 20-pound-test braided line, we kept our Rapala Jigging Raps and Got-Cha plugs just off the bottom, once in a while having to pull free from a snag. After two quiet hours, Lou hooked up with the first fish, a 3-pound walleye. A couple hours later, he caught a 6-pounder. Shortly after that, the wind picked up and we headed for the barn, happy to have caught a couple quality fish under the tough conditions. Though I had no luck that day, what I learned has been invaluable in the years following that trip, and I’ve since used those vertical jigging techniques to catch everything from crappie to muskie.

During the coldest months of the year, many freshwater gamefish migrate to deeper water. In the absence of a thermocline, fish can stack up over deep structure without the issue of low oxygen. Herring and crappie also leave the shallows for deep water in the fall, winter and early spring—and, of course, the predators will follow.

Targeting fish in deep water can be challenging. Even the deepest-diving crankbaits max out at 15 or 20 feet, and at that point they would be moving too fast for a lethargic coldwater fish to chase down anyway. Your best bet is to get right on top of the fish and jig for them. This allows you to keep a lure in front of them long enough to draw a strike.

While a familiar tactic to saltwater fishermen, vertical jigging isn’t often used in freshwater, but it certainly has a home on large lakes and reservoirs. Panfish, walleye, lake trout, hybrid striped bass, monster smallmouth bass and even muskies are taken by vertical jigging every year from the late fall through early spring. At times it is the best—and perhaps the only—way to catch fish in cold water.

Presentations for vertical jigging can include your basic jighead and grub, lipless crankbaits, or even saltwater lures. Here’s a run-down of some of the best vertical presentations for freshwater, along with the species that have a bad habit of eating them.

The Rapala Jigging Rap is designed to be jigged vertically in front of coldwater fish. This lure has a legendary status among ice fishermen, but its ability to catch fish in open water may be even better. You can match the size of the Jigging Rap to the species you’re targeting, and even add a grub like a mousie or wax worm. When fishing from a boat or kayak, a slow drift will help you cover water. On windless days, a trolling motor will help.

Keep the scope of the line at a 60-degree angle and sweep the rod tip to make the lure shoot forward before dropping it back to the bottom. Let it sit on the bottom for a second or two and then repeat the motion.

Although I can’t in good conscience advocate fishing for muskies with medium-action jigging tackle, the Got-Cha plug has an uncanny knack for hooking the fish of 10,000 casts. If the line doesn’t wind up in between the muskie’s teeth, you might even land it. It’s happened to me more than a few times. Aside from that, this popular saltwater lure is my top-producing jig for walleye, and has my personal best to its credit.

I prefer the 100-200 series for jigging in freshwater. These lures are 3 inches long and weigh 1 ounce, which means they get to the bottom fast and stay there, even on the windy days so common during cold-weather months. Quick snaps of the rod tip will get the Got-Cha Plug darting in all directions and long pauses will give fish plenty of time to strike it. My most productive Got-Cha colors have been the chartreuse head/white body and the red head/chartreuse body.

While most anglers associate the Swedish Pimple with ice fishing, it’s just as adept at catching suspending panfish in open water. Fished naked, it will get plenty of bites, but tip it with a butterworm, mousie, wax worm or spike, and you could have non-stop action with slab crappies and perch. With sonar and a little searching, schools panfish can always be found, and they always seem willing to strike the Swedish Pimple.

When targeting panfish with the Swedish Pimple, light or ultra-light tackle with 4-pound test is a must to impart an enticing action to the jig and detect the light bites of coldwater panfish. 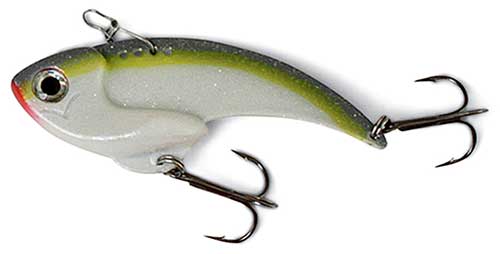 Blade baits have long been a favorite lure for freshwater vertical jigging, and the favorite blade among many New Jersey anglers is the Binsky. This lure is responsible for scores of trophy smallmouth each year along with more than its share of walleye and lakers. Muskies will also occasionally swipe at this lure.

Originally designed as a bait to be cast and worked to bounce the bottom, its weight, pounding vibration and tight shimmer make it a perfect vertical presentation. One mistake fishermen make with blade baits is overworking them, and using big sweeps of the rod to impart action to the lure. To catch more fish, lift the Binsky just a foot or two off the bottom with a fast pump. Then, allow the lure to rest on the bottom for a few seconds because fish will often suck it right off the floor. 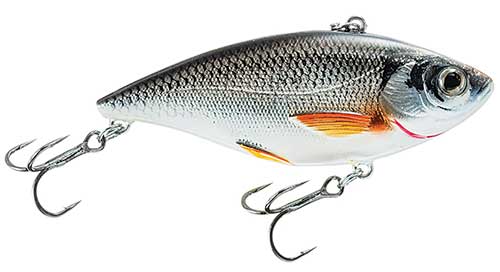 You probably have a few lipless crankbaits in your box, but I bet you haven’t given very much thought to jigging them. Just because they aren’t marketed as a vertical bait doesn’t mean they don’t work. The position of the hook hanger and vibration of Kopper’s Golden Shiner makes it an excellent jigging bait for cold, deep water.

Pump or shake the rod to get the Golden Shiner rattling after you’ve dropped it to the bottom, then move the rod tip slowly to make the bait hover in place with the tiniest bit of movement—a perfect imitation of a lethargic baitfish in cold water. The LiveTarget Golden Shiner comes in ¼-, ½- and ¾-ounce sizes. Use the smallest size for perch and the larger sizes for walleye, smallmouths and lakers. 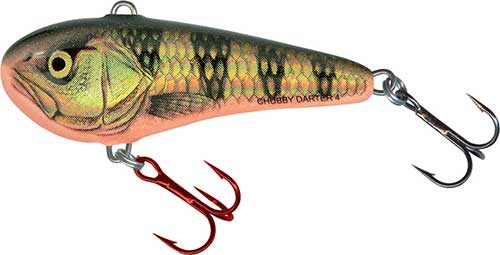 The Chubby Darter is another well-known ice-fishing bait that performs just as well during the open-water season. The smaller sizes of this bait are deadly when accompanied with light line and used to target panfish. The #6 Chubby Darter is a tried-and-true walleye killer. It can be worked in a variety of ways to trigger strikes, including quick shaking of the rod tip to make it wobble or sharp snaps to make it dart. Mix up the action by slowly lowering the Chubby Darter all the way bottom and lifting it a foot or so off.

No list of vertical presentations would be complete without this venerable jighead and soft-plastic combo. While there are probably a hundred different jig-and-plastic combinations that catch fish, the Relax Kopyto shad has been all the rage on New Jersey waters the past few seasons. Fishemen use the 2.5-, 3- or 4-inch Relax Shads on standard ½-, ¾- or 1-ounce jigheads, adjusting the size to account for drift speed and depth. These lures do a superb job of getting baits deep and maintaining contact with the bottom, even on windy days with a fast drift.

Jigging is a viable option for muskies year-round, especially when water temperatures are under 50 degrees. The muskies shouldn’t be too hard to find on sonar. Look for large bait schools in open water as perch, crappie and herring will suspend in cooler temps. Where there is food, there are muskies.

The Bondy Bait was developed for deep-jigging for muskie in the Detroit River, but it has proven itself effective on New Jersey’s lakes as well. The bait has a large profile and creates some flash and vibration as it moves through the water column, tempting muskies to bite.

Once you’ve located a school of baitfish, drop your Bondy down to the school, and lift the lure with long, even sweeps of the rod. Lift the rod tip between 3 and 5 feet on each pull, and make sure the line remains tight on the drop since fish will often hit on the descent—you to want to feel the bite and be able to set the hook hard.