Details matter when you’re looking for trophy-sized fish. Chafed leaders, hastily tied knots, dull hooks – we all know those flaws will cost you a trophy. Still, it’s easy to mail it in when fishing for black sea bass because it’s pretty easy to catch them. Sea bass have voracious appetites and are more than willing to reward less-than-perfect presentations. For this reason (as well as many others), they’re a fish tailor-made for introducing newbies to fishing, especially children. Sea bass are absolutely stunning, especially when donning their electric spawning colors, plus they have some of the most delicious, firm, white fillets on the planet.

That all sounds great, doesn’t it? But how do you begin to target the largest fish of a species full of individuals that seem to be in constant competition with their schoolmates to see who can eat your offering first? You can try and fish through a school and hope a worker’s approach to grinding out numbers will yield some studs, but I’ve found a few tricks that have proven effective at getting jumbos.

In my home waters of Vineyard Sound and Buzzards Bay, Massachusetts, a legal sea bass is 15 inches. On my boat, I typically impose a 19-inch “boat limit” to start, tossing back anything under that length. I usually fish with two or three buddies, sometimes more, so once we get down to the second half of a full boat limit (5 fish per person in Massachusetts), I’ll bump that up to 20 inches. I’ve been doing this ever since I noticed three tactics in particular that made a noticeable difference culling out the larger fish from the school.

Big bait, big fish, right? I often subscribe to that theory when looking for fish across a variety of species, including sea bass. With that in mind, I start with a bigger bucktail jig than I need to hold bottom because I want to present a meal that stands out to the larger fish in the school while still matching the appearance and color of whatever I think they’re feeding on. I take that same approach with a teaser fished above the jig, though I don’t go heavier than an ounce of weight; instead, I choose a teaser with a longer body or skirt.

Using a heavier-than-needed jig negates some of the advantages provided by thin-diameter braided line and light but strong rods, which would otherwise allow me to use lighter, more natural-looking lures. But, frankly, I think sea bass are so aggressive that this doesn’t work against me as it would with more discerning species.

Some of the sea bass spots I fish are between 15 and 30 feet deep. With 20-pound-test braided line and 15-pound-test fluorocarbon, I can use a jig as light as a ¾-ounce Spro Prime bucktail and catch sea bass. But at 4½ inches in length, a 4-ounce Spro Prime Bucktail is almost 2 inches longer and has a much larger jighead. While it’s heavier than I need, bulking up the trailer helps it appear more natural in the water. Give me the bigger bait and I’ll employ the next tactic to soften the way a little more weight appears to move in the water: doubling down on supersizing the entire offering.

One of the best ways to double down on getting the attention of larger fish in a school is increasing the bait’s profile. The way to do this is by adding a trailer to the jig and teaser, which adds length, lifelike action and, in some cases, scent. It also bulks up the profile since the bucktail or teaser skirt is a little more splayed out when there’s a fat chunk of soft plastic pushed up onto the jig’s collar or trailer keeper. Even better, it helps mitigate many of the downsides that fishing a larger, heavier-than-needed jig presents.

I caught my personal-best sea bass on a 2-ounce Spro Squidtail, which is only 3 inches long, but I was fishing a Fat Cow 7½-inch Jig Strips trailer that made the bait appear to be around 8 inches! The action a trailer provides also creates drag in the water, substantially slowing the fall rate of a heavier jig, making it appear more natural.

However, there is a point of diminishing returns when increasing the size and weight of an offering. If you enjoy a fun fight and favor light tackle, a lure that’s too large may size you out of your favorite sea bass combo. You have to be able to control the way your lure moves underwater, and you’re not going to get the right action imparted on your jig and teaser with a rod that’s nearly doubled over whenever you raise and lower the jig. This is something you’ll know by feel; if you can’t make your jig dance and it feels like you’ve got a bowling ball on the end of your line, you’ve overburdened your rod. However, you can still increase the profile of your bait without opting for a bigger, heavier jig.

If you’re fishing a well-known sea bass spot with a big fleet of boats working the same pile of fish, bank on the fact that almost every bucktail, fluke rig, diamond jig, or piece of clam on a high-low rig has traveled by the noses of the biggest sea bass in the same direction of the drift. In these situations, I try to get my bait moving in a different direction than that of the rest of the fleet.

I constantly cast my jig updrift and work it back to the boat. At times, I fan-cast, which changes the angle of the bait passing by the fish, and in the case of casting updrift, totally reverses it. Baitfish swim. Squid swim. Lobsters and crabs are mobile, so unless I am fishing in overpowering current, which isn’t often the case on productive sea bass structure, this seemingly subtle change can make a big difference—especially on pressured fish.

You’ll always get bites when you’re over a school of gluttonous sea bass, but this change can make a difference in getting the “right” bite from a big knothead sea bass. 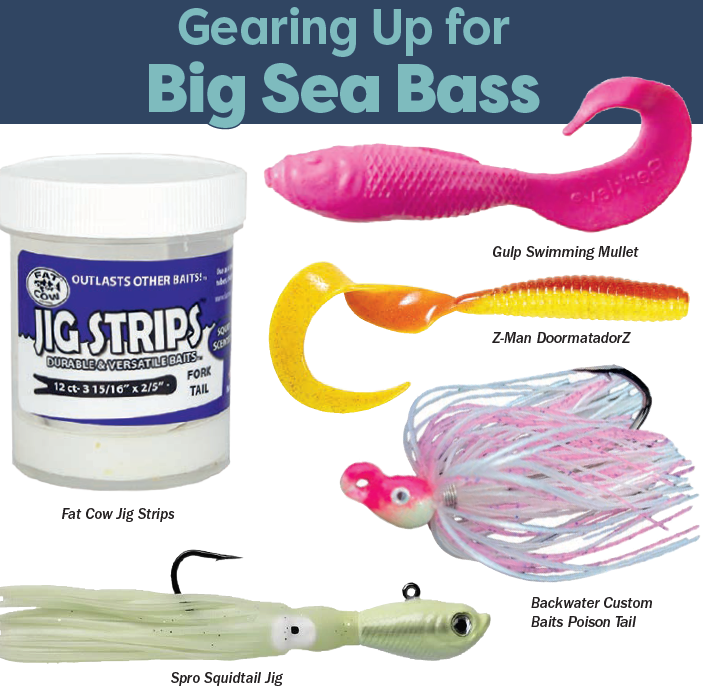 I favor a high-low rig with a teaser above a bucktail jig. My jig selections range between Spro Bucktails and Squidtails, Backwater Baits’ silicone skirted bucktails & ball jigs, and JoeBaggs Flukies. My go-to teaser is the Backwater Baits Poison Tail, which I attach to a dropper loop a foot or so above the jig. No matter which jig/teaser combo I use, they both get a big trailer, and my favorite is a Z-Man DoormatadorZ grub-style one. The material holds up amazingly well to sea bass and tail-nipping scup.

I’m a big believer in keeping my bait in the strike zone longer, so having a teaser that doesn’t get its tail bitten off is an asset. That said, I’ve done just as well using 5-inch Berkley Gulp swimming mullets and 6-inch Berkley Gulp Grubs. Thinner trailers, like Fat Cow Jig Strips are good choices for lighter jigs as they won’t slow the rate of fall as much as a large grub.

I always use fluorocarbon leader over monofilament for added stealth and abra[1]sion resistance around rocky structure. Another unbreakable rule for me is fluorocarbon leader over mono – it simply is a stealthier approach, giving me confidence that a big, disciplined sea bass will be less likely to turn its nose up if anything looks suspect. Fish typically don’t grow large because they’re stupid, especially heavily pressured inshore fish like sea bass. So, little tweaks like presenting a bait at a different angle than all the rigs and jigs those individual plus-sized fish have repeatedly passed up can be the difference for fooling the biggest, most savvy sea bass in the school.