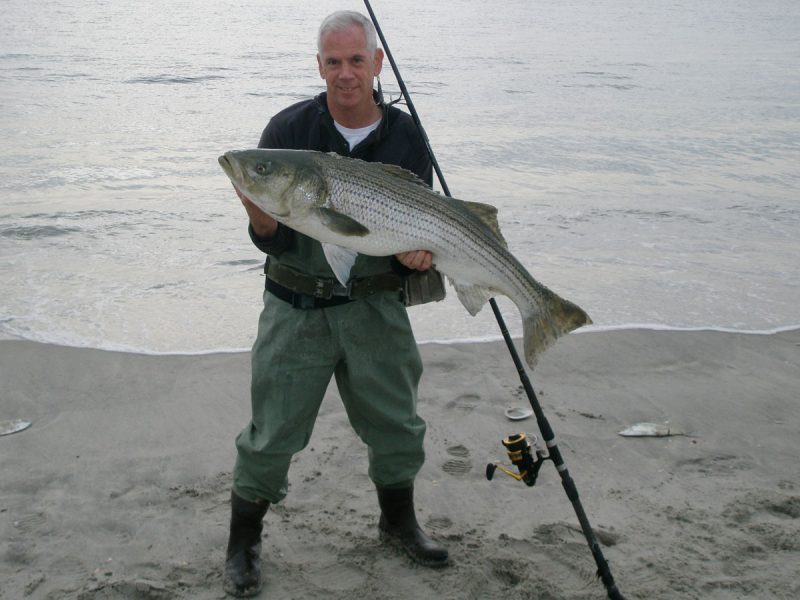 Editor’s Note: In 2020 Massachusetts anglers will be required to use circle hooks when fishing bait for striped bass. By 2021, that rule will apply to all states in the Northeast.

Early one mid-June morning many years ago, I was all set to do some live-lining off one of my favorite jetties. While walking along the beach in the dim light, I noticed a medium-sized calico crab lying motionless at the surf line. Curious, I touched the crustacean, and found it to be a “softy,” fresh from a recent shed of its hard shell. Since the crab was in perfect condition, I decided to stow it in my surf bag and continued on my way to live-line the bunker in my bucket.

After an hour of swimming my bait all around the jetty without any takers, I decided to leave and try another spot.

The ocean conditions looked so good that morning. The water was clear, with a 2-foot chop, and the tide was perfect, three hours into the incoming. I couldn’t believe my bunker had not been eaten! As I stepped off the jetty, I remembered the soft calico crab in my bag. Since I was already at the surf line, I thought I would give it a short pitch into the frothy brine on a simple bottom rig. 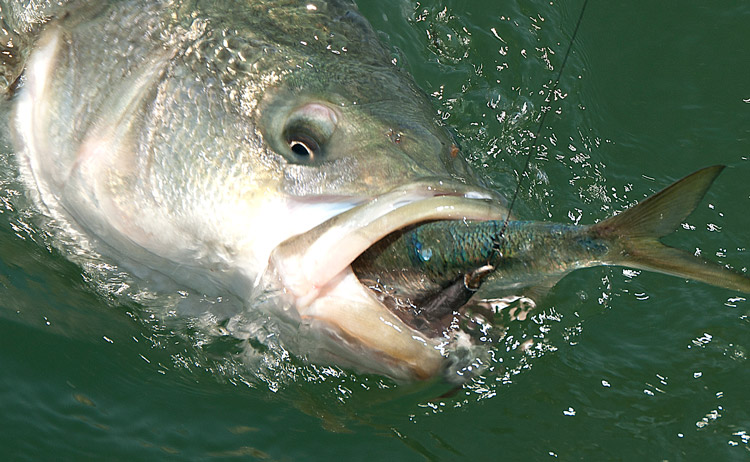 After quickly rigging up and making a short cast, the bait had barely hit bottom when my rod was nearly snatched from my hands. My jaw dropped when the water in front of me exploded as a big striper angrily thrashed the surface. After a brief tug of war on my stout live-lining equipment, the stubborn fish lay at my feet, pounding its broad tail on the sand. The bass was a 42-inch, 20-pound-plus surprise.

It would be great if every time we went to our favorite fishing spot, the stripers took our offerings with reckless abandon. More often, however, catching a quality fish or two requires a little more effort. Hours of casting at prime locations, even under ideal conditions, sometimes results in little more than good exercise. During these outings, paying attention to minute details could present a day-saving opportunity. The solution to a fishless outing may be staring you in the face.

Most likely, I would have never caught that 42-inch striper if I had not been fortunate enough to notice the real bait the fish were looking for on that morning.

Similar experiences have happened to me many times since that day in 1986.

Occasionally, “gifts” from the sea show up, briefly, unexpectedly, and most often, unrecognized. For example, I’ve seen schools of hickory shad or sea herring flipping haplessly along a beachfront with no one taking advantage of the “gift” at hand. The addition of a long-shank number 6 gold hook to a dropper loop 2 feet above the plug will soon put one of the shiny baitfish in hand, ready to live-line on a 7/0 hook. I’ve caught stripers up to 25 pounds using this technique, and I’ve seen much larger specimens landed by other fishermen.

Clams are another often-overlooked gift. On countless occasions after a strong coastal storm, I have stumbled upon huge clam washes with hundreds of whole and broken clams littering the beach. A quick change to a bottom rig with enough weight to keep a fresh clam on the bottom was all I needed to haul in gorging stripers for hours.

The key to taking advantage of these brief opportunities is to be observant, prepared and open-minded. A fresh “gift” is worthless if it goes unrecognized or even worse, recognized and not presented properly.

Many fishermen focus solely on one method of approach at the start of a surf outing. Throwing artificial lures may be the preferred method on any given day; however, staying flexible may be necessary to put fish on the beach. Being alert, open-minded and prepared can pay great dividends to the savvy angler. 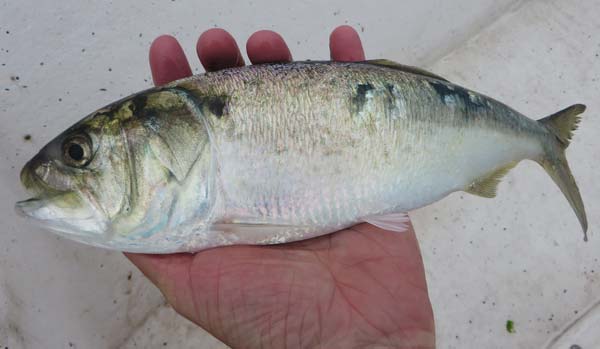 I remember one late night, many years ago, when a huge school of adult bunker invaded the beach. Everyone was throwing swimmers, bottle plugs and just about every lure imaginable. Not much was happening until some youngster took off one of the treble hooks on his swimming plug and used it to snag one of the lively baitfish. Two 25-pound stripers later, everyone had made the switch. Afterward, I wondered how many times I had missed similar opportunities when large baitfish were present, but the action was slow on artificial lures.

It’s not always a sure bet when a “gift” shows up. Often, it’s the presentation that makes the difference and not just the bait.

In 2011, massive schools of adult bunker were showing up along the oceanfront just as falling air and water temperatures were starting the fall run. Almost every surf fisherman on the scene was snagging and live-lining bunker. An older couple, visiting from North Carolina, asked one of the fishermen who was discarding a dead bunker if they could have it to use for bait. The fisherman obliged and soon went back to snagging another live bait. A few minutes later, the water in front of the couple erupted after a giant striper engulfed the fresh chunk of cut bunker they had cast into the sea. To everyone’s amazement, after a lengthy battle a 45-pound striper lay on the beach. I’m sure that big bass had seen countless live-lined bunker that day, yet the chunk is what it really wanted.

Any bait that shows up when fishing is slow is always worth exploring. Nothing should be counted out of the realm of possibility. I once even saw a friend of mine snag an 18-inch worm on his bottle plug, proceed to thread it onto a 7/0 bait-holder hook, and quickly hook up with a big striper. That was the only action we saw all night. It was also the only worm we were able to get.

Preparing for the Surf’s Gifts

A few rigs for catching and fishing bait won’t take up much room in your surf bag, but will be worth their weight in gold when the fish are finicky and natural bait is there for the taking.

A few sizes of snag rigs will allow anglers to gather live baitfish, from small mullet and peanut bunker to large adult bunker. For adult bunker, a 10/0 or 12/0 weighted treble hook will be best. For smaller baitfish a 3/0 treble hook on a 6- to 12-inch leader behind a 1-ounce egg sinker will do the trick.

Baitfish like sea herring and hickory shad readily attack small, shiny objects that imitate the small crustaceans that make up their diet. A small gold hook or two, rigged above a heavier lure, will attract the herring and shad, which can then be transferred to a live-lining rig.

Once you’ve caught your bait, you’ll need to present it to the fish. Bring an assortment of octopus-style circle hooks in sizes 6/0 to 9/0 to cover any bait you might happen across, from sea worms to adult bunker. A few pyramid sinkers will help cast your bait and hold it in the strike zone. Elastic thread will secure soft baits such as clams or soft-shell crabs to the hook.

As with any sudden fishing opportunity, if you don’t have the proper equipment available, you might miss the catch of a lifetime. In addition to the usual array of plugs and jigs, always carry a few simple rigs in your surf bag to take advantage of any unexpected opportunity.

I always carry a couple of bottom rigs with 7/0 to 9/0 bait-holder or live-lining hooks. Additionally, a couple of sinkers, some elastic thread, two or three bare, long-shank size 6 gold hooks on dropper loops, plus some weighted treble hooks, should round out your bag of tricks. Having these in your possession will at least give you a chance of scoring when the surf delivers a gift to your feet. All of these items should be kept in a separate and protected place in your bag.

I know some fisherman frown upon using weighted treble hooks because of the potential of gut-hooking and injuring fish after they have taken live bait, but I use very large size 12/0 treble snag hooks. This size might seem ridiculous, but the large size is not easily swallowed, especially when the hook is set quickly after the take. I might miss some smaller fish using this method; however, I very rarely gut-hook fish. Most are either hooked on the inside of the jaw or through the lips, which makes a healthy release possible.

Over the course of the season, opportunities like the ones I’ve described above might only come along once or twice. Always be prepared and observant. If fishing is slow, look closely to see if the surf is offering any bait that the fish might be more likely to feed on. You may end up being the only fisherman putting a monster on the beach, while everyone else is left trying to figure out how you did it.