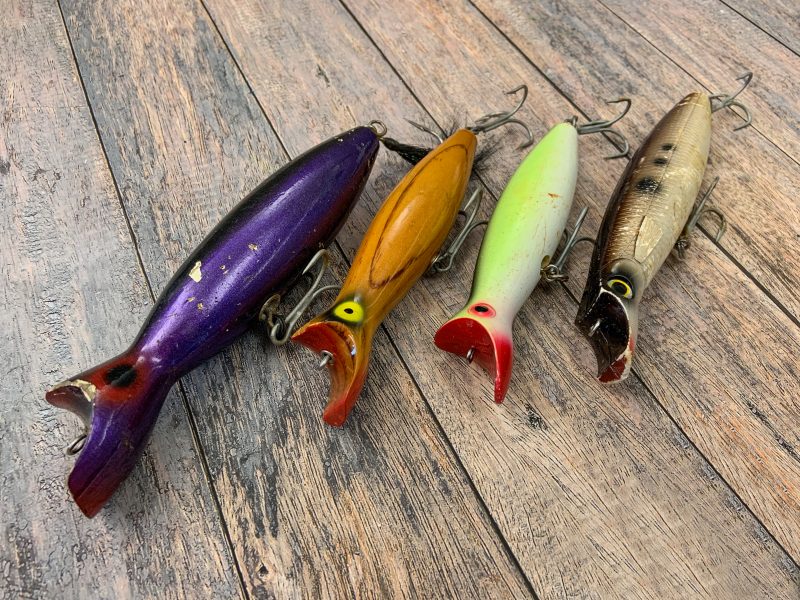 Stan Gibbs created his Casting Swimmers for the Cape Cod Canal some 50 years ago, so they have some history, and they have some history with me as well. I’ve always been interested in how the original wooden ones were made and was impressed with how well they cast. The Casting Swimmer, later nicknamed the “bottle plug” on account of its narrow-necked profile, was a big, solid plug designed with large fish in mind.


When I first began fishing bottle plugs, I was told that they should be fished only during rough conditions and when I had a northeast gale in my face. After all, those are the conditions they were made for, yet I may have missed some other opportunities when I failed to pack bottles in my plug bag during other conditions. My attitude toward bottles being rough-weather-only plugs changed one night while fishing with friends. One of them schooled me while fishing a bottle plug during what I would have called a perfect “darter night.” I watched as my buddy hooked multiple 45-inch-plus striped bass out of the same rip where I was swinging darters on one of the calmest spring nights I can remember.

The extra casting distance, different profile, or swimming action made the difference that night, and taught me that it’s always worth having a bottle in the plug bag, even during calm conditions.

The following night, the bite set up much as it had the previous night, and once I found the rhythm of swimming my parrot Super Strike Little Neck Swimmer through the zone, I began landing fish, despite the calm conditions.

Then another night, I experienced heartbreak when I encountered a school of much larger striped bass. I hooked into one of them using the same Super Strike bottle, and I could tell it was my largest of the season, but I’ll never know just how large because I dropped it. The hooks simply pulled out and left me haunted, wondering about the size of the fish and what I could have done differently.

Shortly after that encounter, I found ideal bottle plug conditions as I approached the water’s edge for a night of fishing. The northeast gale and whipped-up surf conditions prevented me wading in too deep. Reaching the fish, and making the right presentation was going to be just about impossible with any lure—except the bottle plug. I clipped on a GooGoo Man Plug Bottle in my favorite blurple color pattern, which is a little bigger than the Super Strike in length and weight. I launched that plug with my CTS Vapor Trail and it landed on top of a cresting wave. The large lip immediately dug in with the first couple cranks of my handle, and a few seconds later, the plug was slammed.

Another great option to have in the arsenal is a bottle darter, sort of a cross between a bottle plug and a darter. This hybrid plug can be fished in moderate to rough surf and is at home in good current, yet it can also be fished in very calm waters.

This all means that I need to find even more room in my plug bag. It’s getting heavy, but it’s worth it to be prepared for wherever and whatever the stripers will be striking.