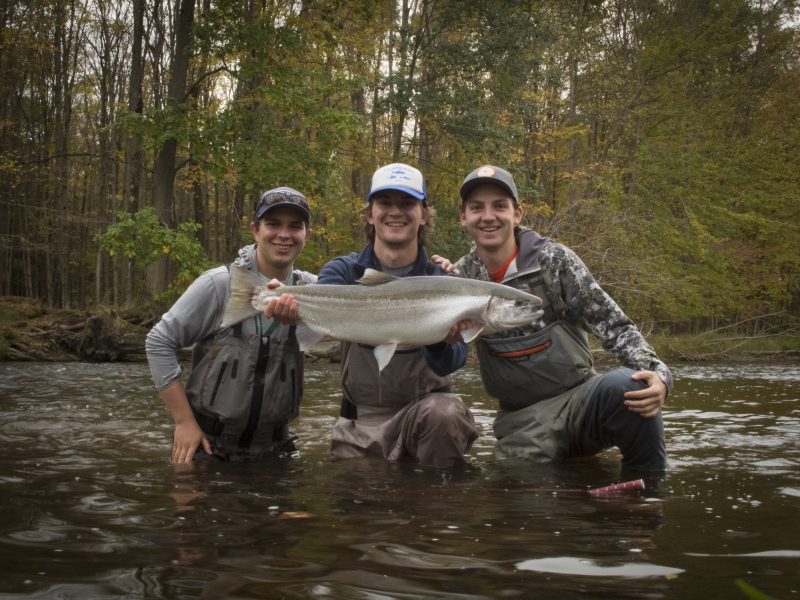 We had been waiting for the first big push of fish into the river for what seemed like months. Salmon fishing was old news, and the rotting chinook and coho carcasses had become nauseating—we needed to catch some steelhead. “I’m telling you, Friday is going to be the day,” Max said. Early on, he quickly emerged as the optimist of the group, always expecting the best. Then, there’s me, the pessimist, expecting nothing to happen. But, this time, I thought Max might be right. With the river low and rain in the forecast, Friday looked like the day the fish might finally move in. 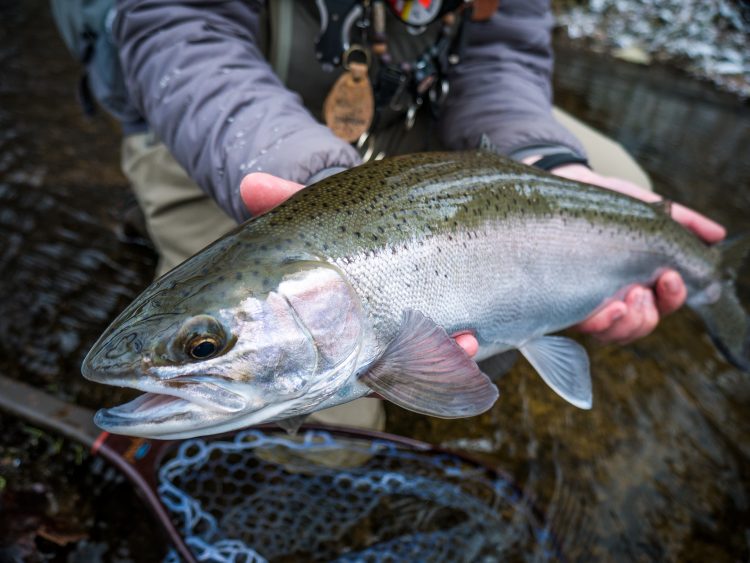 We sat around Thursday night tying flies, drinking beer, and debating where to go. “I have a good feeling about my first 30-incher tomorrow,” Max said with excitement. “You won’t catch squat,” I replied. We’d scheduled our classes to have Fridays off during the fall semester, for no other reason than to fish, although even when we did have class, it rarely stopped us from going anyway. Steelhead wait for no one.

The morning came, and we anxiously awaited the first cast. We prepared, each of us holding our line in one hand and checking the time with the other. Finally, it was legal light, and even though nobody said anything, we all were hopeful for what was about to happen. Within the first ten minutes, I heard Jeff yell “Fish on!” Like troops running to their battle stations, Max and I each grabbed a net and headed straight toward the unmistakable sound of a steelhead stripping line from a fly reel. I went to net the fish and missed. My heart sank. Luckily, Max was downstream, also ready with a net. When I looked up, relief flooded through me as I saw a big chrome fish in his net.

The morning continued with fish being landed left and right. Max had a couple, Nick had a few, Jeff was up to five or six, and then there was me. I’d hooked more than a dozen fish and landed none of them. After lunch, I could tell the guys were pulling for me, and it became a team effort to get my first fish of the season. The action had slowed down, so Jeff and I napped on the bank. We woke up to Nick yelling and motioning for us to come downstream. “A big group of fish just pushed in. Ryan, make a cast there,” as he pointed to a boulder in the riffle. I made the cast as everyone watched. My line went tight. Jeff and Max headed downstream with nets and Nick coached me through the fight. I watched as Max netted the fish, and I let out a scream of exhilaration! We all stood around the net and admired the beautiful chromer, snapped a few photos, and sent the fish back on its journey. The day we had been waiting for finally arrived and it was better than what any of us could have imagined—even Max.

The One Who Got Away

Losing big fish is an important part of fishing. It makes us stare into the lake or river in disappointment, disbelief, and worst of all, curiosity. When it comes to steelhead fishing, I experience these feelings more than I would like.

I was on the bank when I saw Jeff hook a fish. By his exaggerated hand motions and strong language, I knew it was big. Max grabbed the net and hurried toward the fish as it rocketed downstream. I caught up with Jeff, and his heavy breathing showed the intensity of the situation. With each riffle the fish hurtled and every run it took, stress, and anxiety levels increased. No words were spoken between us, except Jeff’s barked orders that struck fear into Max and me. The fish continued to run, back to the lake, and eventually, the hook pulled out. Jeff sat there quietly as Max and I headed back upstream. When Jeff finally caught up to us, all he said was, “That fish was huge.” We never spoke about it again.

I got my own taste of this a couple days later when I hooked what I originally thought was a rock until it started moving. We got a glimpse of the fish after we successfully got it past the first riffle headed downstream. “That’s the biggest steelhead I’ve ever seen,” Max said nervously. I knew the odds of landing steelhead of this size and, somehow, I was trying to convince myself we would get this fish to hand. After a long and exhausting fight, my fearful expectation came true and the line shot back. Like Jeff, I was devasted. That steelhead has become a myth since then, and I have become the stereotypical angler whose fish stories become bigger each year.

It’s funny how the mood quickly changes in the group once we know there’s a big fish on the line. Although they are few and far between, we sometimes do land a good-sized steelhead. 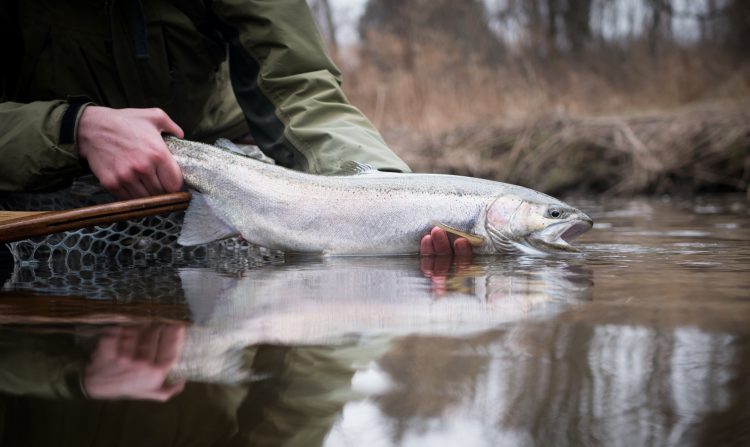 Last year in late October, our group experienced one of our best days of steelheading. We caught fish all through the morning, got some lunch, and caught more in the afternoon. Late in the day, Max and I were on the bank, exhausted, and making fun of Jeff’s baggy waders that made him look like a sumo wrestler. Eventually, Jeff worked upstream to the point where we couldn’t hear him. As Max and I debated over which fast-food chain to hit for dinner on the way home, we looked up to see Jeff flailing his arms and what sounded like yelling. We jumped up and sprinted upstream—or, more accurately, ran slowly while tripping over rocks. When we finally reached Jeff, his reel was almost spooled. I had the camera and Max was ready with the net.

Jeff began to put some serious force on the fish and tried to gain back some ground. The big steelhead didn’t like it and took another run down some rapids. After that, though, the fish started to tire and surfaced long enough for us to get a quick look at him. “That’s a big coho,” I said. “No, it isn’t,” Jeff responded. Max was too focused with the net to weigh in. When Max landed the fish, Jeff was right – a 35-inch steelhead laid in our too-small net. Yelling, hugging, and laughing followed as we all admired the beautiful fish. I’m usually the photographer, but I wanted to be in this one, so I placed the camera on a rock and set the self-timer. That photo now hangs on my wall as a reminder of a day and a fish that will be a part of us forever.

This fall, my friends and I returned to school for our senior year, living in the same apartment and chasing fish every chance we get. After graduation, I don’t know how often I’ll get to see my college friends. We will all be applying for jobs, venturing out into the real world, and dreaming about our past days on the river.

With all of this in mind, I understand how important my final year of college will be. Not so much academically (not that I would ever tell my parents that), but in a sense that it may be one of the last times I get to spend every weekend fishing with my best friends, and I know that years from now, it will be these days that I wish I could relive. 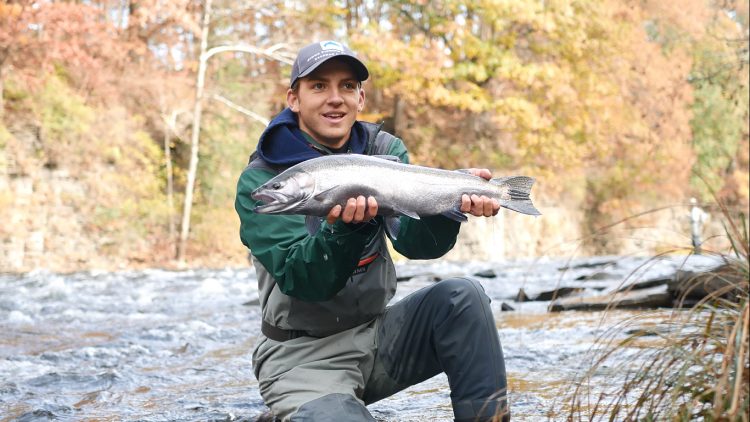