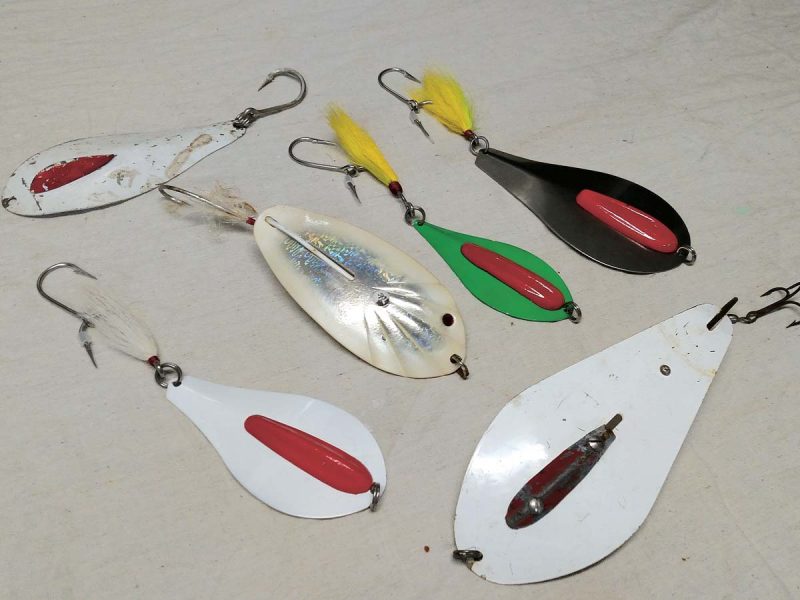 I love fishing for striped bass. Casting soft-plastic baits on light spinning tackle is probably my favorite method, but it is not the best way to consistently catch cows. I also fish live baits on three-way rigs, drift eels under Redi-Rig floats, and anchor up with bunker chunks or clams. I will try any method to chase the majestic Morone saxatilis, but I hate wire-line trolling! I fish for recreation. My goal is to have fun and relax, but make no mistake – I want to catch fish. I know wire is one of the best ways to get fish in the boat, but putting out 150 or 300 feet of stainless steel behind the boat and using the “broom sweep” technique for jigging bucktails or parachutes is hard work! On top of the physical toll it takes on your arms and shoulders, the stainless wire can kink, cut up your thumbs, and backlash in the spool.

When adult menhaden are the primary forage I am trying to imitate, bunker spoons rather than bucktails are what I troll when targeting large bass. Putting two rods out, I try either white or chrome on one rod and chartreuse on the other to see what color might work better. On the spoons, I replace the 8-ounce keel weight with a 12-ounce weight. This adds about 3 to 5 feet of depth with all 300 feet of wire out, which can make a difference in getting down to the largest stripers hanging near the bottom. I recommend adding Loctite or a similar adhesive to the threads of the screws; otherwise, over time the vibration from using the spoons can loosen them to the point of falling off if they aren’t regularly checked.

The curved design of the bunker spoon causes it to swing in a pendulum pattern when trolled, so the rod must have significant give to allow the spoon to swing. Bunker spoon rods are long, often 8 feet in length, and have a parabolic action to add action to the spoon. 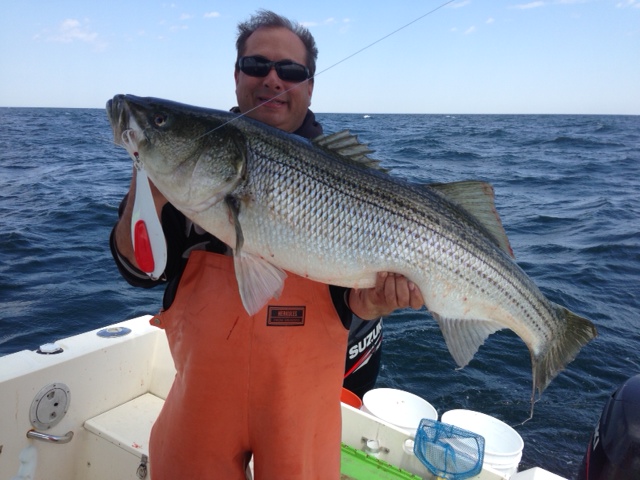 The reel I use is the old standby, a Penn Senator 113H with Dacron backing. Instead of stainless steel wire, I use 50-pound-test ultra-soft Monel. While more expensive than stainless, Monel is softer and more forgiving. It doesn’t kink and contours nicely around the spool. I tend to put out the entire 300 feet of wire while fishing so, for me, there is no need to mark it every 50 or 100 feet when spooling up. For the connections, I use Spro 150-pound-test heavy swivels for strength and because they are only slightly larger than the diameter of the wire, making for a smooth connection running under your thumb. Last, attached to a haywire twist, I add a 20-foot topshot of 80-pound-test monofilament tied to a Duolock snap to which the bunker spoon is attached. 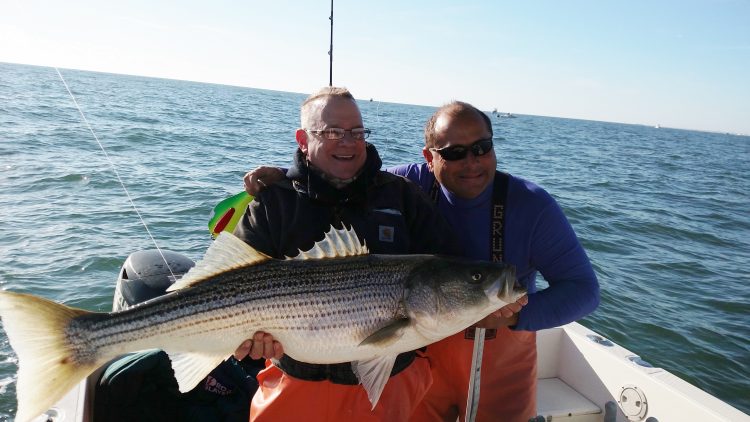 In 50 to 60 feet of water, with the boat running at about 5 knots, release the bunker spoons until all of the wire is out and the connection between the wire and the Dacron is just breaking the surface of the water. This should get your bunker spoon to a trolling depth of about 35 to 40 feet. Use outrodders to position the rods horizontally away from the boat, which provides roughly 16 feet of distance between the swinging bunker spoons to avoid tangling. Once the spoons are deployed, engage the reels and throttle back to 2.5 to 3.5 knots. Oh, and don’t forget to set the drag to a medium tension and put the reel’s clicker in the “on” position; you will often hear the hit before seeing it! With respect to trolling speed, it really is a matter of “feel” in addition to watching your instruments. The general rule is to run between 2.5 to 3.5 knots or maintain roughly 900 to 1100 RPMs, but with a strong following current you can be going a lot faster, so adjust the engine speed to get the correct feel. Getting this right is probably the most important part, and adds a sense of “Zen” when it all comes together. The key to finding the right trolling speed is to watch the action of the rods. They should be pulsing in a short, short, long pattern. The beauty of this is that the pattern of the rods pulsing tells you if you have the right speed. By not pulsing, you may have collected weeds or other debris on your line. So, now you are trolling, checking your depth and looking for marks on sonar. The rods are pulsing rhythmically; you are slowly cruising along, listening to the quiet hum of your engines and smelling the salt air. You are relaxed and chatting with your crew, you take a bite out of that bacon, egg and cheese sandwich you brought on board. Quite enjoyable. Suddenly, you hear the “zing” of the rod going off and yell, “Fish on!” The battle begins, and no longer is wire line trolling a hardship to endure to catch big stripers.