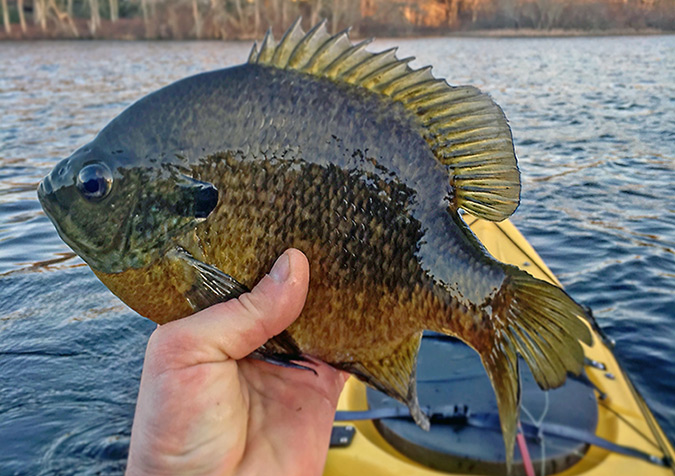 One of my spring angling rituals is to target sunfish with a fly rod. I understand this might not seem appealing to the saltwater, trout, and freshwater bass fanatics. After all, who wants to spend time pursuing sunfish when a trophy just barely covers the palm of your hand?

Nevertheless, sunfish are a welcome change from larger sport fish. It’s relaxing to fish close to home with minimal tackle and a near-guarantee of success, made all the better by the promise of some delicious fillets for dinner.

The fish I am chasing—bluegill, pumpkinseed, redbreast sunfish, and black crappie—all belong to the sunfish or Centrarchidae family. Sunfish spawn in the spring in shallow water, making them easily accessible to both boat and shoreline anglers. While these species can be effectively pursued with spinning tackle, I prefer to chase them with a fly rod.

As mentioned, sunfish are spring spawners. Males construct nests in the substrate in which the females deposit their eggs. Females then abandon the nests, leaving the males to defend the eggs from predators and keep them clean and free of silt by fanning them with their fins. After the eggs hatch, males continue to guard the fry for a time.

Sunfish often build a large number of nests within a small area, termed colonies, and a suitable spawning area might contain anywhere from 6 to more than 20 nests. It is usually quite easy to locate the saucer-like depressions on a calm day if the water is relatively clear. Although gravel substrate is reportedly preferred by some sunfish species for nesting, I have found their nests on a wide variety of lake bottoms.

While the amount of daylight certainly plays a role in when sunfish spawn, water temperature is generally your best way to gauge when they will be in spawning mode. As such, spawning time can vary greatly depending on your location in New England. It’s a good idea to contact your local state fisheries biologist or a knowledgeable panfish angler to obtain an appropriate timeframe to fish your area. However, if pushed for a general time of year, I would say you could be fishing for receptive sunfish as early as April in southern New England and as late as the end of June in northern New England. I generally start my fishing when water temperatures reach the low 60s, as this is when I find bluegill starting to stage in shallow water for the spawn.

Preferred water temperature for spawning varies among these species and numerous temperature ranges have been reported for each in scientific literature. Remember, though, fish don’t read the scientific studies and will always surprise you just when you think you have them figured out. For example, last spring at a water temperature of 72 degrees Fahrenheit, I found a shoreline still loaded with bluegill and pumpkinseed on beds, with black crappie just offshore in slightly deeper water.

Although sunfish are very prolific, they can (in some instances) be vulnerable to overharvest. During spawning, large numbers of adult fish are present in small areas, and catching hundreds of fish in a day is possible. Harvesting males from nests not only removes those fish from the population, it all but guarantees that the eggs or fry of those fish will perish as well. As such, always harvest wisely. I attempt to time my fishing during the pre- and post-spawn periods and try not to target sunfish while they are actively spawning or defending nests.

Most lakes, ponds, and large rivers in New England contain sunfish, but the quality of these fisheries and number of species present can vary greatly. Fellow anglers, state natural resource department websites, and fisheries biologists are great sources to help you select the perfect waters to fish.

Spawning Water Temperature Ranges
Start your fishing when water temperatures reach the low 60s, as this is when bluegill begin to stage in shallow water for the spawn. There is some overlap in spawning water temperatures among these sunfish species, and hybridization sometimes occurs. A common cross found in New England is that of bluegill and redbreast sunfish.

Once on the water, typical locations to find these fish in and around the spring spawning period are shallow coves in lakes and ponds, and backwaters/setbacks in larger rivers such as the Connecticut River. I look for water that is less than 4 feet deep with a soft or gravel bottom. Expansive shallow flats can be a goldmine, and locations adjacent to emerging stands of aquatic vegetation are also good places to investigate. Gravitate toward any fallen tree, stump, or log because the sunfish will too—especially black crappie. Focus on northern shorelines earlier in the year; these areas are the first to warm up. Warm, sunny afternoons can be particularly good early in the year.

One of the best things about fly-fishing for sunfish in the spring is the limited tackle needed. Sunfish are not picky about what fly you offer them and usually won’t turn up their noses if the cast and presentation aren’t perfect. Finally, there is no need for expensive rods, reels, and line. An inexpensive 3- or 4-weight fly rod in a length of 7 to 8 feet is perfect. I use a 7.5-foot, 4-weight Prestige II Fly Rod Combo from Cabela’s. This package came with everything needed to start fishing, including a large-arbor reel, fly line, backing, a fly assortment and box, leaders, rod and reel case, and a small chest pack filled with fly floatant, forceps and more. It is a great combo and doubles nicely as a small stream trout setup.

Fly-fishing also has advantages over spinning gear. A 10-inch crappie or bluegill puts up quite a fight on a light fly rod. And, fly presentations are more delicate and less likely to spook fish. It is quite a thrill to watch the wake of a 10-inch bull bluegill as it rushes your fly in shallow water.

Because these fish are shallow, I use a floating line and let leader length and time after my cast dictate how deep I fish when using a subsurface fly. My typical leader length for fishing water less than 4 feet deep is about 6 feet in length. I find 4-pound monofilament or fluorocarbon line works just fine as a leader and there is no need to make or purchase tapered leaders.

Depending on the species and time of year, sunfish will feed on everything, including zooplankton, aquatic insects, crayfish, and minnows. I have found that they are not at all particular about the condition of the fly, and I generally use beat-up flies that I no longer feel will fool a trout.

Small poppers are one of my favorites. Simply cast out and slowly bring in a few inches of line at a time; just enough to make the popper create a small disturbance on the surface. Poppers are a perfect choice when there is no wind. Panfish usually gently “sip” poppers from the surface, so pay attention and watch your fly at all times. Dry flies will be greedily gobbled up by these fish as well, but poppers hold up best to repeated strikes.

Any small subsurface flies will work as well, such as dark-colored nymphs, traditional wet flies and streamers. Some of my favorites include the Wooly Buggers, Prince, Pheasant Tail nymphs, Mickey Finns, Blacknose Dace, and ant imitations. Cast out and let your fly sink to the appropriate depth, and then slowly strip it in. Experiment with the length of your pauses to determine what works best on a particular day.

One of the huge benefits of targeting sunfish in spring is that a boat is not always necessary. As long at the bottom is firm, wading along the shoreline works well and backcasts are usually not limited because you can cast parallel to shore. I move slowly along the shoreline, casting ahead of me. Hip boots work in most cases, but I generally wear chest waders, just in case the water suddenly gets deeper or I slip. Be cautious of fallen logs and very soft bottoms. I also have a few select locations that I can easily fly-fish from shore, making them perfect for quick stops on the way to the store or after work.

A kayak, canoe, or boat with a bow-mounted trolling motor will allow you to cover more water and reach locations not accessible by foot. I move slowly along likely shorelines, casting ahead of the boat and toward shore, all the while keeping an eye out for fish.

A good pair of sunglasses is a must for spotting shallow fish, regardless of your method of fishing. On calm days, sight-fishing can be a blast, so keep an eye out for nests, or small boils and wakes on the surface. While sunfish can be easily spooked, they typically return to the area within a few minutes of being disturbed.

Larger non-target species are an added bonus when spring fishing for sunfish. Largemouth bass are often found in the vicinity of sunfish nests, trying to pick off an adult sunfish or feed on their fry. Casting beyond the deeper edge of a sunfish nesting colony often results in a fantastic battle with a nice bass. Pickerel and yellow perch are also receptive to flies at this time of year.

Give fly-fishing for sunfish a try this spring. Remember that a trophy is in the eye of the beholder. As an email last spring from a friend read, “Had an hour to kill last night. Pumpkinseeds, crappie, bluegill, and at least a dozen bass! So easy to catch and so much fun. Can’t understand why more guys don’t do it!”