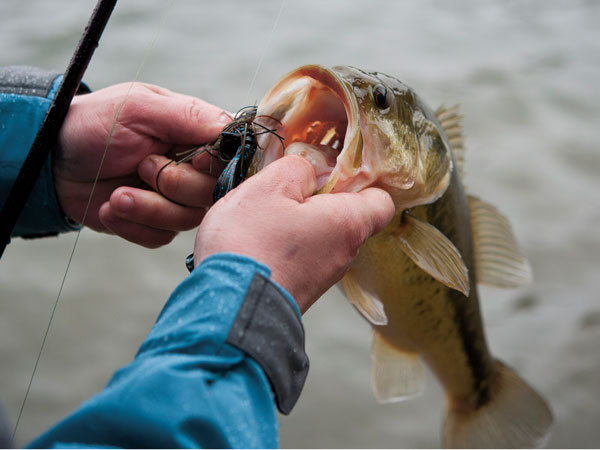 The Frances Fleet in Point Judith was able to make two trips over the weekend and had some solid results. The fishing was strong on Saturday, with good action on bait and jigs, and a good pick of keeper fish. The results on Sunday were a bit weaker, but they still found a decent number of fish. The key seems to be anchoring up in places where they were marking bait, although a few other boats reported a better bite jigging on the drift. They plan on sailing whenever the weather allows, so be sure to check their schedule for updates.

Ralph, at Crafty One Customs had said that anglers have been using the warmer weather to their advantage and finding some holdover striped bass action in the ponds and rivers. That bite should continue to hold strong as long as it’s not too cold, and saltwater anglers can also look to some solid cod action on the days in which the weather cooperates. He also reported that freshwater anglers have taken advantage of the lakes and ponds opening up and have been finding a good largemouth bite on jigs and jerkbaits. Ralph will be closing the shop for the month of January and would like to wish everyone a Happy New Year!


Dustin, from Rhode Island Kayak Fishing Adventures reported that he got out on the kayak this week for some local trout and salmon fishing, and he was rewarded with a fantastic bite. He used ultralight tackle for the highly pressured, line-shy fish, and had a good mix of some sizable rainbow trout and Atlantic salmon. The ponds are fishing well in the mild weather and provide plenty of entertainment during the saltwater off season for kayak anglers.

Elisa, from Snug Harbor Marina reported that we have been in the midst of one of the best weather windows that the fleet has seen in a while. Many of the boats have taken full advantage, with some strong cod fishing and great sea bassing before the season closed. There have been a few holdover striped bass reports here and there, while freshwater reports were quiet due to the recent rains.

Breachway Bait and Tackle is still closed for the winter, but they encourage anyone to call if they need something, or stop in if you’re driving by and anyone is at the shop. Most of the local anglers are still trying to find holdover striped bass, but the bite has slowed down quite a bit since December. Freshwater options have been stronger, including a good bite for Sebago salmon that were stocked in the fall, along with a very good largemouth bite in most of the lakes and ponds in the area.

Rhode Island saltwater anglers continue to take advantage of some decent weather windows for January, with solid cod reports coming in for those who tried since the New Year. Holdover striped bass fishing has slowed down a bit from the last few weeks, but it still remains better than usual for this time of year. Ideally, we start to see even more holdover action, with a few more sunny days and some cleaning water. The largemouth bass, pickerel, and panfish bite is back in full force, with pretty much all bodies of water now being clear of ice.