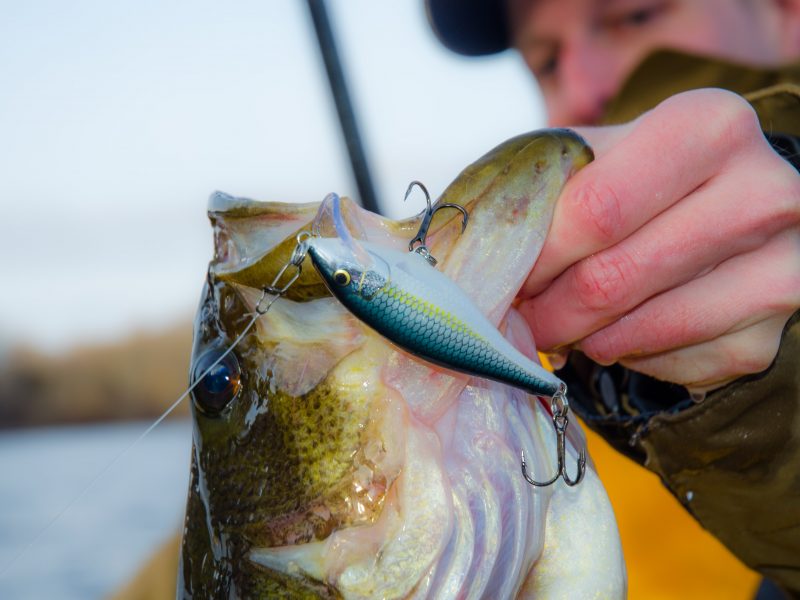 Matt, at Black Hall Outfitters in Westbrook told me that it was more of the same for anglers across CT this week. The bite has been a bit slower, but anglers are still finding some good success with trout in the Salmon and Farmington Rivers, and a decent salmon bite in the Shetucket River. He has managed most of his fish on yellow or gold inline spinners, but the centerpin and spoons can work as well. With most of the lakes and ponds in the state now devoid of ice, anglers have been taking advantage of some cold-water bass, crappie, and pickerel action. The best bet for holdover striped bass remains the Housatonic, but the Thames and lower CT River estuaries have improved a bit this week.

Heather from Black Hawk Sportfishing reported that they ended their season on a high note, with a few good trips around the holidays. They had a good showing of sea bass before the season ended, along with some cod, pollock, and ling. They are now done for the season, as they are pulling the boat to get some maintenance done. Be sure to keep an eye on their Facebook page and/or websites for updates on the spring sailing schedule!


Dan, at Dan’s Bait, Tackle and Charters in New London told me that with the up and down weather it has been tough for anglers to choose whether to keep the summer gear out or start getting the ice fishing gear ready. Some skim ice is showing up, but open water opportunities remain the focus of most anglers. The Norwich area is producing bass from 20 inches all the way up to nearly 40 inches, although most remain of the schoolie variety. Looking for deeper areas where the current drops off and fishing soft plastics very slowly has been the ticket for most anglers. Reports are similar from the Housatonic, where anglers are finding plenty of bass on soft plastics fished on various types of lead heads. Good weather days have been sporadic, but anglers heading to the cod grounds are reporting good catches whenever they can make it out there.

Bobby J’s Bait and Tackle in Milford reports that most anglers are either heading to the Housatonic for stripers or hitting the TMAs for trout. What has been a very mild January has fueled an even better bite than usual in the Housatonic. The mild January has also caused the fishing pressure to increase, so be prepared to bounce around to some lesser-known spots if possible. The Sunnyside area has been a hotspot of late, and most of the fish are still coming on soft plastics threaded on various sizes of leadheads. Larger fish still tend to come after dark, but the fishing has been steady for anglers fishing the daytime hours as well. All of the local TMAs are putting out some nice fish, with a good number of them coming on the fly. The flows on the Naugatuck River have also cleaned/settled, and anglers are reporting a nice uptick in salmon activity this week.

Fisherman’s World in Norwalk also told me that the two main focuses for local anglers has been either holdover stripers or trout. The Norwalk, Saugatuck, and Mianus Rivers have been producing good catches, on worms, flies, spinners and spoons. The Naugatuck River is also still producing some good salmon results for anglers making the ride. It’s much of the same on the Housatonic, with soft plastics on light jigheads producing plenty of holdover bass. Daytime fishing is producing better numbers, while the bigger fish still tend to show up after dark. It’s been far from a good year for anglers targeting herring, but there are still a few being caught around the harbors for those that are trying.

While signs of a February cool down are on the horizon, the mild winter continues, and so do the wintertime open water fishing opportunities.

Connecticut anglers can continue to take advantage of an abundance of striped bass and are continuing to see more consistency, as the rivers are cleaning up. While the mild winter may be aggravating for ice anglers, it has helped highlight the strong holdover fishery we have. Reports from the Housatonic were as steady as expected before the rain/snow, and that should remain the same as we stay mild after the weekend. If you’re not looking to head to the Housatonic, good news, reports from the lower CT and Thames Rivers have improved this week. Freshwater anglers can take advantage of a salmon bite in the Shetucket and Naugatuck Rivers, along with some recent fall trout stocking. The Connecticut River has started to clean up and freshwater anglers who are taking advantage are finding ample open water opportunities for pike, perch, and crappie throughout the river.