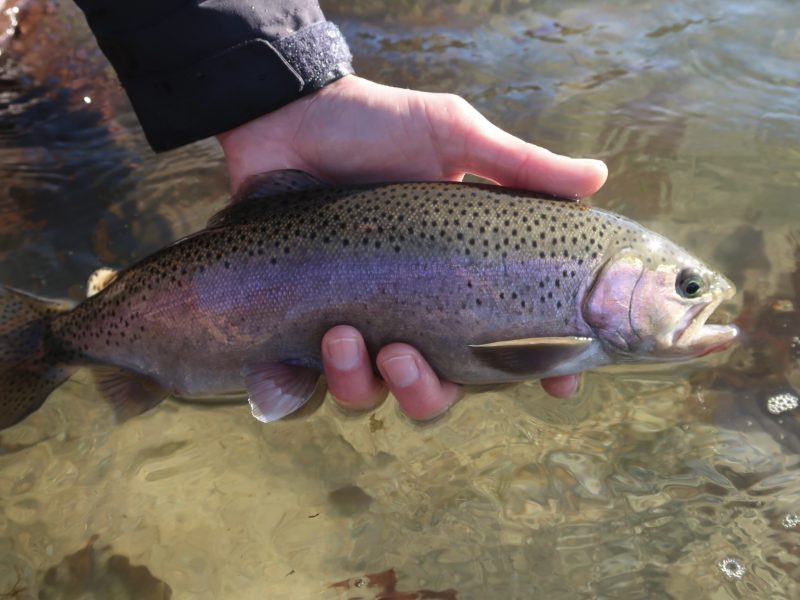 Matt, at Black Hall Outfitters in Westbrook told me that it was more of the same for anglers across CT this week. Anglers are finding success with recently stocked trout and salmon, as long as the flows aren’t too high or out of control. He has managed most of his fish on yellow or gold inline spinners, but the centerpin and spoons can work as well. With most of the lakes and ponds in the state now devoid of ice, anglers have been taking advantage of some strong bass, pike, and trout fishing. A few holdover striped bass reports have come in from the Eastern Connecticut creeks and tribs, while the Housatonic remains the hot bed for holdover fishing.

Heather from Black Hawk Sportfishing reported that they ended their season on a high note, with a few good trips around the holidays. They had a good showing of sea bass before the season ended, along with some cod, pollock, and ling. They are now done for the season, as they are pulling the boat to get some maintenance done. Be sure to keep an eye on their Facebook page and/or websites for updates on the spring sailing schedule!


Dan, at Dan’s Bait, Tackle and Charters in New London told me that anglers have continued to take advantage of the lack of ice on the rivers, with some decent holdover bass catches throughout the Thames and Connecticut River estuaries. The recent rains have mucked things up a bit, but it’s cleaning up quickly. Most are reporting the best success with soft paddletail plastics on a jighead from 1-3 ounces. A few of the fish will still take a swimming plug, especially on the warmer/sunnier days. Saltwater anglers heading out toward Rhode Island for cod continue to find good catches, whenever the weather allows.

Bobby J’s Bait and Tackle in Milford reports that most anglers are still focused on the Housatonic, where good striper fishing continues day and night. The Sunnyside area has been a hotspot of late, and most of the fish are still coming on soft plastics threaded on various sizes of leadheads. Larger fish still tend to come after dark, but the fishing has been steady for anglers fishing the daytime hours as well. The flows on the Naugatuck River have also cleaned/settled, and anglers are reporting a nice uptick in salmon activity this week.

Fisherman’s World in Norwalk reports that the Housatonic River continues to draw the most interest of local fishermen. Soft plastics, such as Zoom Superflukes or Albie Snax, on light jigheads remains the ticket for winter holdover fishing. The central to upper portions of the river are now producing the best bites, from the Sportsplex to points north. Trout anglers are reporting good catches from the Norwalk, Mianus, and Saugatuck Rivers on Roostertails, small spoons, and small jigs. Herring reports remain quiet this season, but a few have been caught around Norwalk and South Benson.

Connecticut anglers can continue to take advantage of an abundance of striped bass and are continuing to see more consistency, as the rivers are cleaning up. While the mild winter may be aggravating for ice anglers, it has helped highlight the strong holdover fishery we have. Reports from the Housatonic were as steady as expected before the rain/snow, and that should remain the same as we stay mild after the weekend. If you’re not looking to head to the Housatonic, there has been good enough schoolie action in the lower Connecticut River, Thames River, and most of the small Eastern Sound estuaries to make it worth not driving west. Freshwater anglers can take advantage of another round of Atlantic Salmon stocking in the Shetucket and Naugatuck Rivers, along with some recent fall trout stocking. The Connecticut River has started to clean up and freshwater anglers who are taking advantage are finding ample open water opportunities for pike, perch, and crappie throughout the river.