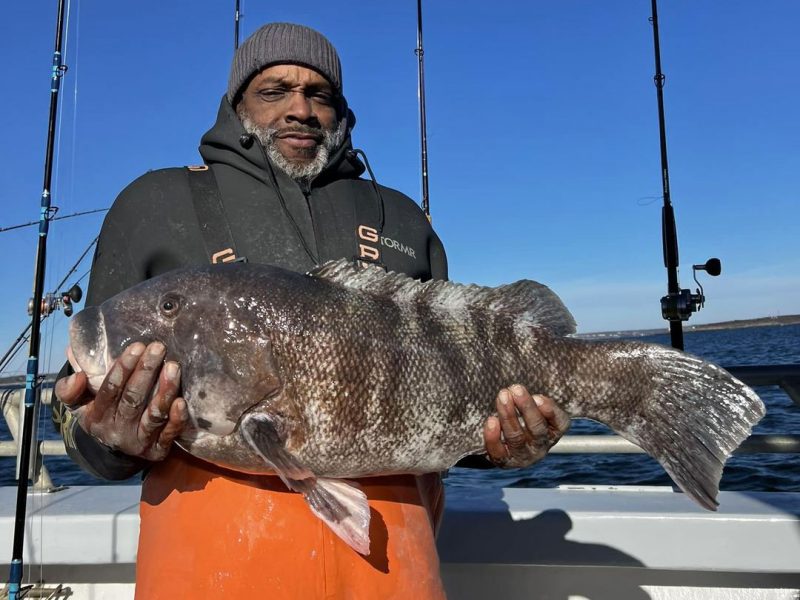 (Above) Dave Jones caught and released this hulking 17.4-pound blackfish on the Island Current out of City Island in The Bronx this week. Nice catch Dave, and an even better release!

Sheesh, it’s been cold out there. But, despite the dropping temperatures, the bite has been nothing short of amazing. Tautog fishing has improved around the wrecks and reefs, as evidenced by Dave Jones’ behemoth from the Western L.I. Sound (above). Even in freshwater ponds, fishing is great this time of year. However, striped bass fishing out west has been nothing short of amazing, and that’s a tough bite to turn away. Videos of anglers wading through peanut bunker to reach the bass in the Rockaways and Brooklyn indicate that the bite will likely last for a couple more weeks on south shore beaches, and even in the bays. The class of fish has significantly dropped off, with most of the bass now in the slot range if not just below the 28-inch mark. That’s not to say there are no over slot fish around, they’re just few and far between, as is usually the case toward the end of the fall run.

Late November usually produces some giant blackfish, and right on cue, it seems like that bite has taken off. The Long Island Sound is fishing well for tautog with flurries of big scup (porgies) here and there. The action seems to have picked up around the south shore reefs as well, as we’ll see in the reports from local boats and shops.

On another note, freshwater fishing has picked up across Long Island. A few consecutive sunny days will have largemouth bass active, especially with a little breeze. Inline spinners, jerkbaits or slow-rolled crankbaits and soft plastics will catch bass that are either suspended or hugging bottom. Throwing small jerk baits and Rapala minnows will invite more than just bass to strike though; rainbow and brown trout, chain pickerel, black crappie and yellow perch will readily hit these lures, so a multi-species freshwater outing is not out of the cards. Air temperatures will have to remain relatively warm, above the 40-degree mark, for all of those fish to remain active though. Activity in the ponds will soon begin to drop off though, which means slower retrieves and smaller lures will bring success. Trout fishing, and even carp fishing, will continue to offer anglers action throughout the winter unless the lakes and ponds freeze over; but for now, trout fishing should be productive in many of the stocked ponds and rivers connecting them.

Once the saltwater bite dies down, it’s fun but challenging to try and keep fishing through the winter. It requires some moving around; the neighborhood pond is not always going to be productive. When the ponds begin to see skim ice or freeze over entirely, I’d recommend making a few trips to the NYC reservoirs and rivers that pepper the map of Westchester County.

These reservoirs require a bit of extra preparation, including a permit issued specifically for fishing the reservoirs. They hold NYC’s drinking water, a very valuable resource, so conservation efforts are taken seriously. Within these waters are lake trout, big brown trout, huge smallmouth and largemouth bass, and fat yellow perch, and they can all be caught from shore. The reservoirs are very deep, and can be unforgiving. Blade baits, Krocodile and Kastmaster spoons, and Keitech swimbaits on 1/4- to 1/2-ounce jigs are must-have-lures if you plan to fish from these rocky, forested shorelines. It’d be wise to keep some long-casting jerkbaits too, as brown trout can often be seen blitzing on alewives and gizzard shad. However, the most useful tactic is to drop a soft plastic jig or metal lure to the bottom and slowly crawl it back to you, keeping it as low as possible. Strikes are often subtle, but if the line slacks out or slight tension is felt during the retrieve, set the hook.

Lakers will follow lures all the way to the surface, so it’s not uncommon to see one swipe at your spoon, blade or jig along the rocks as it swims up from the dark, cold water. Maintain that steady retrieve all the way in, because it may be the difference maker in a skunking or catching.

Even largemouth bass will feed in blustery cold conditions. They’re less common than catching smallies in the cold, but any tug is a welcome one during the winter.

I hope this encourages some of you to pack up some tackle, water and warm weather gear in a backpack, strap on the hiking boots and hit the deer trails in the woods of these reservoirs. They’re unmarked trails, so keep a map open as you trudge along the shoreline and let someone know where you’re going if you plan to fish alone. It’s a fun way to stay active and have some adventurous fishing through the colder months.

But that’s enough about trout and freshwater bass; let’s get down to the bite in the salt, as the Fall Run is still going strong around NYC and Western Long Island. Here’s the rundown from our local boats and shops!

“Excellent blackfishing continues aboard the Gypsea. We have seen a consistently good bite on most days with loads of shorts and plenty of keepers in the mix. Those who are patient at the rail have been easily limiting out most days. Plenty of 4 to 6 lb fish coming up with the occasional big one close to double digits. We will continue sailing open boat by reservation only until the end of blackfish on the 22nd.” Call/text the Gypsea (516) 659-3814 for information and availability.

“Ocean fishing in the NY bight has been very slow, as it has for the last several seasons. We opted to fish local bottom, and it paid of for us landing countless keepers to from 3-7lbs. Bass were literally eating the crabs while we were togging. I don’t remember bass being everywhere like this before. Pic below is from Sunday’s charter.” Call/text Captain Rich (347) 661-4501 for information and availability.

“Our current charter has landed 100 plus fish as we speak. They’re ranging in size, but all are biting on soft plastic jigs and paddletails. There are bass out front and in the bay this week. The overall size of these fish has decreased, but the abundant numbers of have not.” Call/text Captain Vinnie (516) 728-6952 for more information and availability.

The Sound Bound Star out of New Rochelle had its last trip for the season today (Wednesday) for scup, sea bass and blackfish. They are still operating charters out of their Rhode Island location for time being, so if you want to get into some tog with their team, don’t rule out a drive to R.I.

“Wreck trips have been very good! We are still catching jumbo sea bass, slab porgies, cod, pollock and much more. We will continue our offshore wreck trips for the foreseeable future.” For more information and booking, call (516)607-3004.

“Porgies have been few and far between, but we’re seeing some big blackfish out in the Sound recently. There are also good numbers of striped bass in the western Sound biting mostly on eels at night, although some scattered blitzes have popped up here and there, in which case spooks and poppers did the bulk of the catching.”

Mike from Causeway Bait and Tackle in Wantagh reports:

“There’s been decent fishing off the beach this week especially off Robert Moses State Park and Jones Beach.  The primary baits are sand eels and some peanut bunker, so diamond jigs, bucktails, and soft plastic sand eels have been doing the bulk of the catching. Tautog fishing is still decent inside the bay, but it never really picked up out front. There are good fish coming from the bridges. Our local ponds are going to be fishing well soon. As weeds die off, bass can be targeted with relative ease, and trout were stocked in places like Twin Ponds back in October. Some guys even target carp in our ponds when it starts to get this cold.”

“Our local creeks and streams are doing well with trout, and the water has been very clear. The Connetquot River is fishing extremely well after some recent rains, and some anglers are reporting 10- to 15-fish an outing. Not far from me is the Croton Watershed in Westchester County, which is doing well for trout too; low water is making fishing relatively tough though. Otherwise, if you’re willing to drive, the Salmon River upstate is doing great this week after some snowmelt, with tons of steelhead activity reported. Saltwater fishing is winding down, and catching stripers now seems more about timing and extra effort than finding fish out our way. Things are still great to the west though, with tons of bait around for the taking.”

“Blackfishing is getting progressively better near the Robert Moses Bridge. It was good to see a few fish close to 5 pounds. Despite how good blackfishing has been, we still have tons of bass to catch this season. Watch the bite explode to the west as it gets colder.”

Tautog fishing sounds like it’s almost as good as it gets right now, so book a charter or hop on a party boat to target the bulldogs. There’s plenty of short action still to be had from the piers, but bigger fish have shifted to deeper water around more secure structure.

Striped bass will continue to hang along the south shore beaches as long as this plethora of peanut bunker and silversides sticks around. It sounds like the bass are migrating south quickly in New Jersey, but there are no signs of bass leaving the Hudson area anytime soon. Lighter tackle can be used from the beaches now when conditions permit, as the bass are often in tight and feeding on smaller baits; it’s a great way to enjoy the plentiful schoolies and slot bass as the season winds down.

Besides good tautog fishing, striped bass fishing and some wreck fishing, saltwater fishing options are slowly but surely running slim. If and when the bite slows in the surf, freshwater fishing will be available on the many streams and rivers around Long Island where there are trout, bass and one of my favorites—white perch, to be caught. Downsize your tackle and lose the braided line for those little relatives of the striper, because your braid will absorb water and freeze. White perch live in the tidal portions of rivers where freshwater meets the salt, and they eat small paddletail jigs, marabou hair jigs (like bucktails, but smaller), white grubs and various flies. Think striped bass, but miniature on all fronts. They’re powerful little panfish, and a lot of fun for surfcasters when things wind down on the beach.

Think about taking a trip to some freshwater lakes or those NYC reservoirs and trying something new! Wherever fishing takes you this week, be safe, respect each other, respect the water and fish hard.

Wishing a healthy and happy Thanksgiving to all. Tight lines!