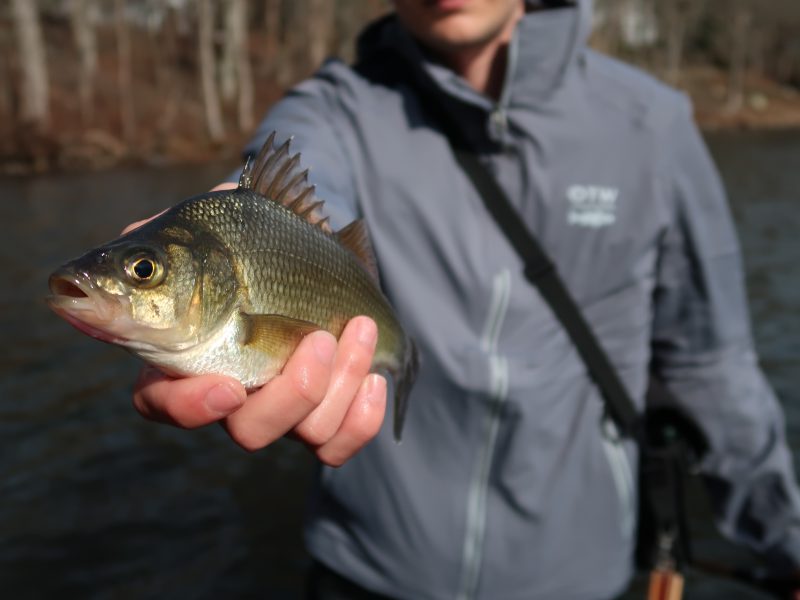 It’s been a pretty quiet week for fishing around Cape Cod. After freezing temperatures and heavy winds, there aren’t many anglers still chasing striped bass in the surf. There are still whispers of stripers throughout the back bays and rivers, and only a few boats are getting out there for tautog, which was tricky in the wind this week. It may be worth going out to try for a Thanksgiving bass, which would give me even more to be thankful for this year, but like many Cape anglers, I’ve begun to shift gears.

The past few weeks I have been freshwater fishing more when time allowed, and it was great. Bass, pickerel, yellow perch and trout were all in the mix. But one of my favorite things to do when the air and the water get cold is to target white perch.

Close relatives of the striper, they provide exciting headshakes and surprising runs. These mighty little panfish eat a lot of the same types of lures enjoyed by striped bass, such as hair jigs and soft plastic paddletails, and I was happy to catch a handful during a chilly day this week.

The water was cold and murky, so light colors were getting it done. I broke off on a “big” fish with my favorite chartreuse jig directly in front of me. All I got to see was the flash, so I anxiously tied on a white and pink hair jig, and found a few more fish. To my dismay, the hook on my jig found an unexpected little predator mingling with the school of white perch.

It looks like I have no other choice than to go back out and try to catch one last striped bass before the buzzer. What would you do? I don’t think I have the heart to let a sea robin be the last saltwater fish I catch this year. Looks like a trip to the local haunts or the Canal is in the cards this week. Can you believe these things are still around?

Speaking of the Canal, there are still some fish popping up on top early in the mornings and during the tide switches. The usual pencil poppers and bottle neck poppers are getting it done as the fish chase small schools of mackerel racing down the rocks. Casting to the middle of the ditch isn’t always necessary. Sometimes it pays to let the lure swing down-current and work it slowly back to you, dragging it right past any bass that are hugging the rocks in anticipation of those intermittent bait schools.


While the saltwater bite cools down, freshwater fishing continues to (metaphorically) heat up. Trout are biting well, but the trend among trout anglers seems to have them hanging lower in the water column. Slow rolling a spoon or rigging some Powerbait to a dispey sinker will likely pluck a few fish from the ledges. Most of the reports have rainbow trout producing a majority of the action, but select ponds are holding brown trout and even tiger trout; finding them just takes a little research and knowing what to throw.

Here’s the rundown from our local shops this week, as most of the charter boats have called it quits on the season.

“Caught some more fish yesterday morning in the ditch. Most of the bass are just under slot or just barely in the slot, but they’re all fat and filled up on bait. A low slot fish in the Canal right now might weigh near 20-pounds, so there’s some good fishing to be had still. Tautog are still coming up in the Canal too, a few decent size fish were brought into the shop this week. Big trout are biting in freshwater ponds nearby, and those same ponds have been really productive for smallmouth and largemouth. A couple guys fishing a tournament caught some 22-inch rainbows and a mess of bass all on jerkbaits.

“There are still a few fish popping up every morning at sunrise, and they pop up again around the breaking tides. Pencil poppers are getting the job done for the most part, but it seems like any topwaters will trick these bass as they fatten up to head south.”

“A few of our customers are still catching stripers out there in the surf, but it has been very slow. Our customer Jim was catching schoolies in the Canal this past week, which he was surprised by, but like many of us he doesn’t want to let go of the season. Other than that, we’re still selling lots of shiners for freshwater trout and bass out here. When shiners aren’t the go-to bait, gold spoons like Kastmasters and inline spinners are doing the job on trout. We have a few anglers still targeting tog, but they won’t fish much later than mid-December as bait sources dwindle. Freshwater fishing is going to be the primary coverage from here on out.”

If you’re in close proximity to the Canal, it sounds like there’s a few more fish hanging around in the early mornings. I had nearly put saltwater behind me for the year, but after catching a sea robin this week, I think I deserve another trip or two to the Canal. Topwater is the most exciting way to catch ’em anyway, so I have no problem freezing for a couple hours if it means breaking the curse of the sea robin. Maybe I’ll see some of you down there.

Time to layer up and hit the kettle ponds, because they’re fishing well for rainbow trout, largemouth bass and smallmouth bass.  Shallower, smaller ponds will likely see a few different species such as yellow perch and pickerel in the mix, and they’ll eat the same baits as the bass and trout; spoons, spinners, jerkbaits and live shiners are all on the menu.

When targeting trout, play around with the retrieve and fish different levels of the water column to locate those fish. The same goes for white perch. If trout or perch are visibly on a school of bait, they may be feeding while suspended over open water. Since it’s been so cold this week though, the trend seems to be trout and bass holding tight to the bottom, so a low and slow retrieve or long pause between jerkbait twitches may be necessary to entice a strike.

Fishing may be slow this time of year, but it doensn’t have to be. Get out there and make your own reports when you have time! Wherever fishing finds you this week, be safe, respect each other, respect the water and fish hard.

Wishing you all a happy and healthy Thanksgiving! Tight lines!