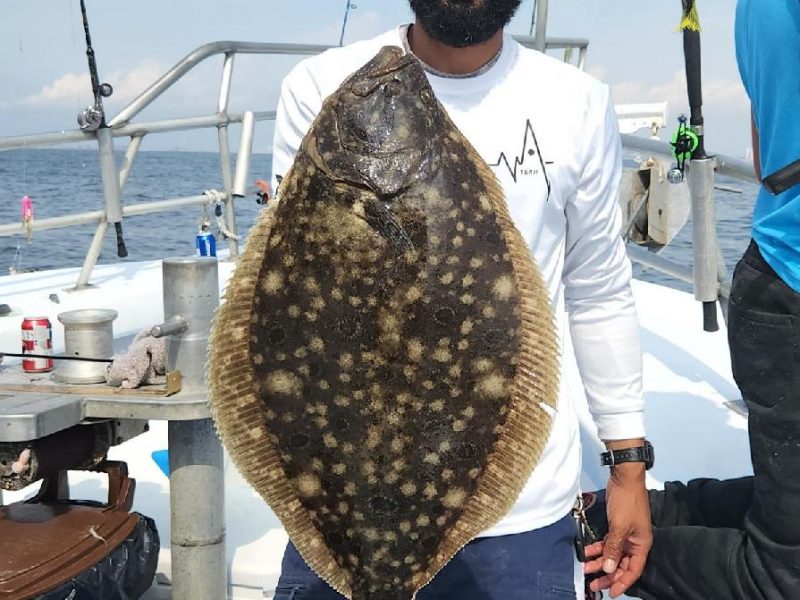 (Above) This is one of many large fluke to hit the deck for Gypsea Charters this past week. They are still finding excellent fluke fishing despite changing conditions.

Come the first week of September, it is time to start prying the back bays for early “Fall Run” stripers. I started each Fall Run on Long Island by looking to the West. For whatever reason—perhaps it’s the proximity to the Hudson and East Rivers—the West end of Long Island always seemed to pop off early in the Fall. Though it’s technically summer until September 21, the action started around late August in Jamaica Bay, and trickled out onto the beaches of Breezy Point and Rockaway.

But it all begins with a night bite full of schoolie striped bass. I have some friends who spend their nights picking away at schoolies from piers on the East River before they hit Jamaica Bay and the beaches, but I preferred wading and throwing bucktail jigs on light tackle. When small bait like peanut bunker are in J-Bay, a sparsely tied bucktail jig in white or chartreuse was typically most productive. I fished almost exclusively at night, and although shoreline access is limited on the Bay, there are some very fishy spots that can be reached by foot and fish well during most hours of the day.


But daytime striper fishing was not my forte during the early Fall. I spent the daylight outings targeting fluke, which was a really fantastic bite the past two years or so, and lasted well into October around Jones Inlet and Atlantic Beach.

Fluke bite well in the back bays until mid, even late October. The last fluke I caught in 2021 was on October 26th, and what should’ve been a striper outing in some blustery, overcast conditions, turned into some “all you can catch (and release)” fluking. Most of the fish were shorts, but that was the end of October. In early September, these fish will stack up around the sandy shoals inside Jones Inlet, and as I’ve stated in past reports, they’ll bite on anything from fluke strips to squid strips and spearing to Gulp.

There are also plenty of weakfish around this time of year. On the

Around Rockaway and NYC, bass are pushing through the East River and there’s even been an influx of weakfish caught and reported around the West end.

“Excellent fluking continues! The past week we have been specifically targeting deeper wrecks and rock piles in search of larger fluke. We saw fish to just under 10-pounds with numerous 6-to 8-pound flatties in the mix. While the action has slightly slowed, the keepers have been there. This is a tough time of year with the weather variables, but now is the best time to catch a doormat. We will be mixing in striped bas trips when the weather isn’t favorable for fluking.” Call or text (516)659-3814 for more information, or to make reservations which are required.

“Last week we had professional soccer player Sean Johnson out with us on a commercial bluefin tuna trip in the NY Bight. We waited it out and were rewarded with an 80-inch bluefin, estimated to weigh about 300 pounds. This was originally a bass charter, but because I’m a federal commercial license holder, we decided to switch things up last minute. It sure paid off.” Call or text (347)661-4501 for information or booking!

“Jamaica Bay continues to swell with fish daily. We had a ton of bluefish on topwater this weekend. The last few days saw even more excellent topwater action, and this mornings private trip saw even better. We must have caught 80 bass and bluefish, with big blues dominating the bite. Peanut bunker are everywhere throughout the Bay, so find the schools and throw a popper or spook into the mix. This bite is only going to improve.” Call or text Captain Vinnie to book a trip (516)728-6952.

Sound Bound Charters in New Rochelle and Mamaroneck reports that the bluefish beatdown continues, with a haul of 12- to 15-pound gators and plenty of racers becoming a regularity on their nighttime trips. The sunset porgy bite remains hotter than the late-summer weather. Sunset scup trips have been packed with anglers, but that hasn’t kept the porgies from chewing. The weather forced them to cancel trips on Wednesday 9/7. Prior to the weather though, there were some real slabs coming over the rail with no signs of slowing down, so hop on a boat after work or school before they begin trips in Rhode Island again next month for epic tautog fishing.

Point Lookout’s Super Hawk reports that large sea bass, scup and fluke have been coming over the rail with regularity at their local spots. This week, there were even a handful of good size bonito mixed into their customers catches off the wrecks and reefs. To make a reservation for this family friendly fishing boat, call (516)607-3004.

A bit further east, Capture State Park serves as a great gathering place for like-minded fishermen from the 5 Boroughs or the Forks to meet in the middle.

Due to weather and rough seas offshore, trips are being cancelled almost daily, so keep an eye out for a possible trip on the local Laura Lee if you plan on getting out for some bottom fishing around Capture this week.

Brandon at Causeway Bait and Tackle in Wantagh reports:

“Lots of bluefish showing around the inlets, specifically Jones. There’s tons of bait around there, which is probably why the fluking is still been great in the bay. There are some solid keeper fluke coming up around the Meadowbrook bridges, which should continue as long as the bait remains this thick. There have also been some slot bass in the salt marshes around sunset and sunrise, so kayak anglers and skiff owners have been catching decent stripers on light tackle using poppers during those low light hours. There were also rumblings of bonito caught out at the wrecks, and one of our guys here at the shop got into a few of them on the boat this Labor Day weekend. Hopefully we start to see and hear a bit more action from the albies, but signs of the fall run are certainly beginning.”

“The rivers are up after some rain this week, which will help our local trout fishing and breathe some life into the creeks. Tuesday we had a little rain, but I went out to the beach and Jones Inlet was completely packed with bluefish on the surface and there were no boats to put them down. I enjoyed that for about an hour and a half before the blues moved. However, on my walk back to the car, albies popped up right in front of me wishing casting range on the beach. I didn’t hook any unfortunately, but it’s great to know they are around after their brief stint in Orient. It makes sense they’re here, because there is still tons and tons of spearing and peanut bunker in the back bays. The Fall Run is shaping up to be a good one.”

“There’s still a good mess of blues in the Sound with a couple reports of striped bass here and there, but that’s mostly a night game. Fluke fishing has certainly slowed down up here, but it’s been decent, people are still catching keepers out there on local charters. Limits of fluke are far fewer these days. If you’re looking for fast and furious action, porgies are the name of the game. Guys are catching platter-size porgies on bloodworms, sandworms and clams. Come in to the shop for your bait early in the morning and rent a skiff to experience that exciting, light-tackle fishery while putting some meat in the cooler.”

“Shore guys are catching false albacore from Breezy Point to Rockaway although they’re a bit scattered and biting on epoxy jigs mostly. Porgy fishing has slowed down a bit, as has fluke fishing, but there are still quality fatties coming from deeper water where Gulp seems to be the ticket to success. Schoolie stripers are feeding on small bait up in Jamaica Bay, and there are a ton of cocktail bluefish causing blitzes on peanut bunker all over the Sheepshead Bay area; so along with the epoxy jigs we’ve been selling a lot of small- to medium-sized Krocodile spoons and Kastmasters. The fishing should only improve in the surf as the Fall weather settles in.”

“Albies and bluefish are coming in shallow, making for some exciting shoreline fishing from Jones Beach to Rockaway. There are still plenty of sharks and rays being caught regularly on the open beaches, mostly at night and in the mornings on chunked bunker. Bonito are around but a little scarce, or at least not coming in shallow like the albies have started to do. There are reports of bonito coming up as bycatch for anglers fluke fishing at the local reefs off of Long Beach and Jones Beach. Now that albies are in though, we start to see certain lures fly off the shelves like Deadly dicks, Joe Baggs resin jigs, Gotcha Plugs and Fat Cow resin jigs.”

“A few days ago, Kenny Owens, Brayden Owens and Jesse DiBenedetto caught a 170-pound, 65-inch bluefin tuna in Ambrose Channel while fishing a live bunker in 80-feet of water.”

With the amount of big bluefish I’m hearing about at Jones Inlet, may I highly recommend taking an 8- to 9-foot rod out there with a few Super Strikes or Gibbs poppers, and watch the madness unfold. It’s not guaranteed they’ll be there, but with a little prying in the surf using metals and casting jigs, you might find some gators or daytime stripers keyed in on smaller bait, especially as water temperatures slowly start to cool.

Fish the back bays in areas where you can make long drifts in decent current to target keeper fluke. Start with smaller offerings first to locate the short flatties, and then supersize that for a doormat. Large Gulp grubs are some of the best artificial baits for fluke. My favorite colors were always pink shine and nuclear chicken, however, basic white ore chartreuse sometimes outperform the loud color combinations.

As the nights continue to cool, grab a headlamp and your waders and hit the back bays with small swimming plugs, bucktail jigs and paddletail swimbaits to target stripers as they begin to fatten up for their journey south in the coming months.

Hardtails are here, but they’re scattered for now. It sounds like in a weeks time, we’ll have some consistent reports of albies biting along the South Shore. Meanwhile on the North Shore, bass are already on the move in the back bays, and big bluefish are sticking around in open water.