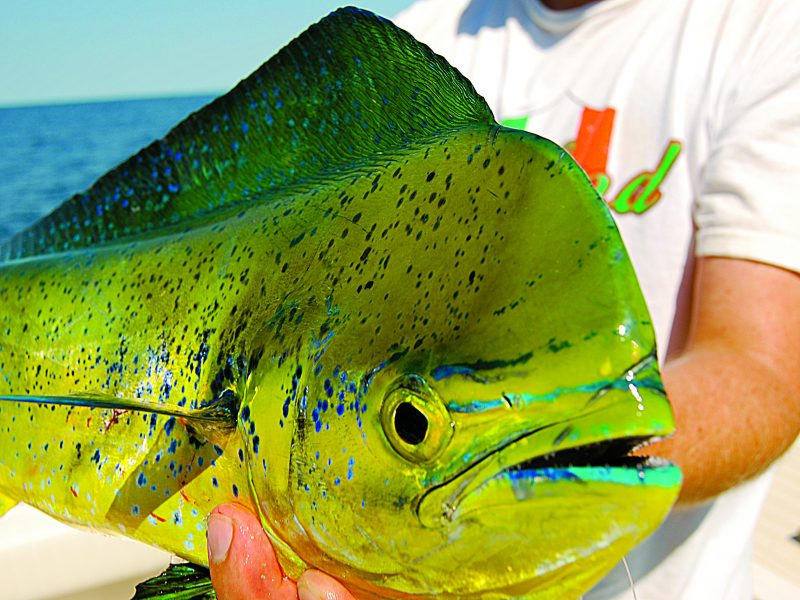 Mahi and tuna has been the fishing word over the past week, and anglers looking to score decent fillets and loins should hit the inshore canyons.  The best action has been in the 40 to 80 mile ranges.  Chunking butterfish, whole squid, and trolling early morning resulted in excellent bites on these pelagic species.  Flounder or fluke have been shut off as the hurricane swell has had the fish “slightly” off the bite.  The weekend should provide better action and hopefully the tropics stay quiet for another few weeks.  The bays have been alive with plenty of fish from northern puffers to weakfish.  Mid-September is the time when anglers will see peanut bunker and mullet staging in the bays and inlets.  The migration of these species provide feeding opportunities for fluke, striped bass, and weakfish.

Hook House Bait & Tackle in Toms River reported a good stocking of bloodworms for striped bass in the rivers and along the brides.  Flounder action was decent off the beaches of Island Beach State Park and bluefish have been hitting metals near the inlet.

Lacey Marine in Forked River said fishing was epic for northern puffer from the BI to 42 buoys as lots of boats have been double chumming in the area.  Clam or squid baits on kingfish rigs have been producing 30 to 70 fish per trip.  Fluke fishing was much better in the ocean, but the bite was slow.  The Barnegat Inlet has some fish, but there has been lots of shorts compared to keeper fluke.

Jerzey Buoyz Sportfishing was looking for mahi and tuna at the mid-shore ridges and the skipper found both species.  They will be targeting fluke until the remainder of the season, so give them a ring.


Creekside Outfitters in Waretown had good numbers of keeper fluke from the reef sites and areas close to the inlet on live mullet.  The offshore scene was hot on good numbers of mahi on whole squid and epoxy jigs.  The crab bite has been slow, but blowfish have been very thick from the “BI” to the “42”.

Reel Reaction Sportfishing out of Waretown was out during the hurricane swell working the bay areas to box 87 to 100-plus northern puffers and a half dozen kingfish.  The skipper will be targeting ocean fluke the rest of the weekend with the mild sea conditions.  The crew has started booking striped bass trips for November and December.

The Super Chic out of Barnegat Light continued to harvest fluke from the inshore reef sites as the skipper said the fishing has been good.  The recent hurricane swell pushed fish a little further off, but the bite remained good.  The crew will be targeting wreck and offshore tuna in the coming weeks.

Tony’s Bait & Tackle in Manahawkin had nice reports of blowfish on clam baits from the “BI” to the Little Egg Inlet.  Blowfish have been very thick this year and chumming with clam logs has continued to be the best way to catch them.  The fluke bite was a tad slower this week as the recent hurricane swell had most ground fish off the feed.  It should get better this weekend, and look to the local reef sites to produce.

Tackle Direct in Egg Harbor City said the bite was excellent for mahi and the canyon tuna bite has begun to heat up.  Chunking and trolling have been the best for tuna while working the pots pays off for the mahi.  The inshore fluke bite slowed with the recent swell, but the past few days anglers have seen better bites at the reefs.

Tight Lines Bait & Tackle in Somers Point had nice reports of bay striped bass hitting soft plastics at night and tog, sheepshead, and some triggers off the rocks and bridges.  Anglers working jigs in the inlets and reef sites have been catching some keeper fluke.  The offshore reports have been consistent with tuna and mahi at the canyons.

Badfish Charters in Ocean City reported a slower week in terms of flounder fishing as the ocean swell had most flatties off the bite.  There are still a good number of fish in the inlets and Capt. Brian has been targeting some of the bay species.

The Cape May and Wildwood areas had good reports from the backwaters with some good numbers of striped bass being caught on topwater plugs.  Anglers working the evening tides are finding some weakfish in the deeper holes.  There has been a good amount of bait movement over the past week with mullet and peanut bunker.  Offshore action has been tuna and mahi in the canyons, and there are some mahi around the inshore lumps.  Flounder fishing has been best at the reef sites, but the swell toned down the bite over the weekend.  Whole squid and bucktails tipped with Gulp has been the best baits.

The best bet for the weekend will be one of three choices, as the fishing has been hot on a few fronts.  First, anglers looking to box a few mahi or tuna should hit the canyons and look for the temperature breaks.  Tuna has been very consistent over the past several days.  Inshore anglers will have excellent shots at good fluking with the weekend forecast.  The inshore reefs and wrecks to 100 feet are the areas to hit.  Surf fisherman working mullet should be able to find cooperative fluke, bluefish, or striped bass.  The bucktails and Gulp worked during the day should provide the best opportunities for ambushing flounder.  The drop-offs, cuts, and any areas adjacent to rock-lined jetties are quality locales to try.  Good Luck, Be Safe, and Tight Lines!