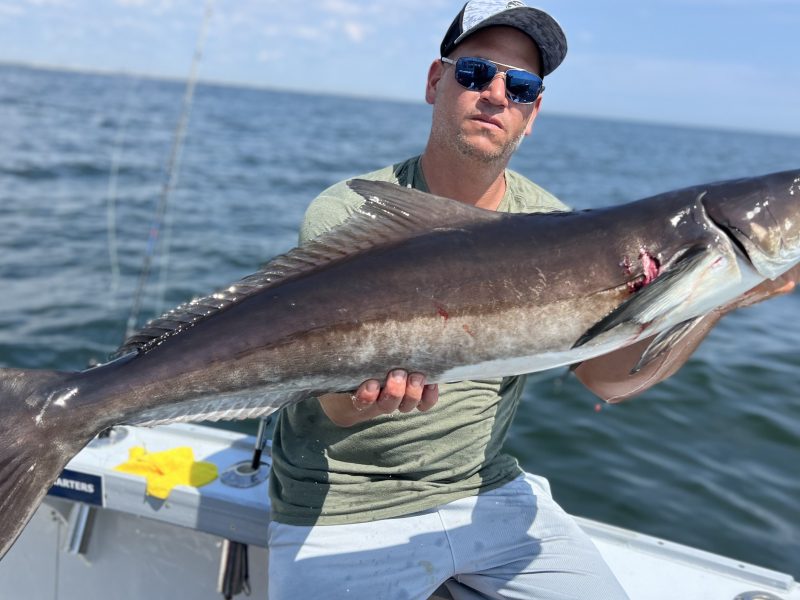 (Pictured above) Captain Rich Colombo of Rockfish Charters in Brooklyn has spent the summer putting his charters on big striped bass and cobia around bunker pods.

Long Island is aptly named. It’s 118 miles from end to end. As far as islands go in my experience, it’s indeed a very long island.

If you’ve made the drive, or perhaps the train ride from Manhattan to Montauk, you know it’s an overwhelming amount of space. For a few years, Tim Regan has done a fantastic job of wrapping all 118 miles into one report. But truthfully, there is too much fishable water for one man to cover each week; the North and South Forks, the Long Island Sound, the expansive back bays of the South Shore, the Boroughs, and everything in between… So we decided we’ll share two localized reports to provide better representation and more information to our Long Island following.

Here’s what Captains, tackle shops and anglers in Nassau County and the Greater NYC area are catching this week:

Porgy fishing in the Sound has been consistent. Many scup fanatics flock to the area for that reason. But bluefish have also been coming in thick and stacking up in shallow water, with one angler catching a 19-pounder near the Throgs Neck bridge earlier this week. There’s bunker everywhere in the Western Sound, which would explain the increased presence of gator blues. The fluke bite has also been surprisingly steady around the Sound’s islands, with most anglers catching a limit early and releasing a few more keepers. Jack’s provides daily skiff rentals and a wide variety of bait from worms to spearing.

Decent sized cobia are stalking bunker pods to the east. The fish are anywhere from 20- to 80-pounds. In the marinas, small cocktail blues have become an increasingly popular catch. Fluke fishing on shore has been slow with the recent heat, but the local headboats of Sheepshead Bay are getting one or two keepers per angler per trip. For those interested in catching porgies, they seem to be biting mostly at night around piers and off of small wrecks. Stop in to the conveniently located shop for all your bait and tackle needs!

“Our ocean fluke trips continue to produce nonstop action with countless throwbacks and nice keepers hitting the deck. It seems like a new wave of fish has moved into the area and we expect the good fishing to continue. We saw quite a few limits this past week for those anglers using bucktails being rewarded. We sail open boat daily by reservation only.” Call/text (516) 659-3814 for more information!

“Bass fishing in the New York Bight continues to be spectacular. Live-lining bunker has been the key to success. On the ocean side, the cobia have our invaded bunker schools (see report cover photo). We have a legitimate cobia fishery in New York with fish to 80-pounds being weighed in.” Call or text Captain Rich to book your NYC bass trip (347) 661-4501.

Paul McCain of River Bay Outfitters in Baldwin reports that striped bass fishing has been productive in the back bays but mostly in the very early morning before the sunrise. The bite is best with an incoming tide bringing in cooler water, and Paul said the magic window has been around 3 a.m. to 5 a.m. since the sun has been off the water; the heat of the past week or two has effectively shut off the daytime bite. Paul added that bluefish up to 4 pounds have stormed the back bays in numbers, providing plenty of fun on the fly rod. Fluke have also been biting well, but in deeper water after last week’s heat. Paul also added that he’s been taking brief road trips to the Housatonic River to catch smallmouth bass on the fly!

Fluke fishing is hit or miss recently, but when the fish are biting there are keepers to be had. Late last week, Lucy Sullivan landed a 5-pound fluke at McAllister Reef while fishing with a pink bucktail and squid strips. The shop carries live killies, which are a hard bait to beat if you want to catch keeper fluke without leaving the inlet. Stop in for bucktails and bait just off the Meadowbrook Parkway so you can get after the fat flatties!

Jerry Ruff of Fish Your Way on Youtube found some sizable triggerfish and porgies out near Robert Moses earlier this week, before switching gears and hitting the pond in his rowboat for some white perch. The triggers and porgies (along with fluke, puffers and more) were chewing clam or squid tipped on high-low rigs. White perch, however, are a common target during colder months; but fishing with lighter tackle in deep water is a fun way to target these powerful little fish while putting some good eats in the cooler. Check out Jerry’s Youtube channel for more!

Lindenhurst Bait and Tackle reports that a few quality fluke came in this week; they weighed one locally caught fluke that was over 10-pounds. That fish hit on live bait. Grab your live killies and get after it!

Captain Lou Fleet in Freeport reports that their whale-watching trips have been stellar, with plenty of humpbacks and even dolphin sightings to spruce things up. Please use caution when boating around the Jones Inlet area. The Capt. Lou has also seen some great fluking recently. They’re sailing daily, so check out the website for availability of trips of most interest to you!

While I can’t speak on exactly what is going on around Nassau and the Boroughs at the moment, I’ll give you my best educated guess as to where there’s good fishing around my old stomping grounds based on past experience.

The back bays— from Long Beach out to Babylon and Captree— are a kayak anglers dream. Drifting the channels with Gulp on a bucktail or a high-low rig from a kayak can yield some quality fluke this time of year. The deeper channels around the Loop and Meadowbrook parkways are paved with short fluke, but catch the right tide and you’ll find keepers hugging structure. I typically fished this region with very light tackle: 10-pound braided line on a size 3000 spinning reel with a 7-foot rod.

Don’t overlook the Jones Inlet area for some striped bass at night, or big blues during the day. If you want to rile up some lazy blues, a white Gibbs Polaris Popper around the jetties and open beach troughs is hard to beat. Metals and spoons are also a great way to produce a midday bite on the beach, and they’ll catch bluefish from Robert Moses to Rockaway. I’ve even had slot stripers crush spoons right on the beach lip under the high sun. Do your best to imitate small, injured baitfish and you should succeed in the surf.

Kingfish, northern puffers, triggerfish and small sea bass will keep the young ones entertained around fishing piers. Just make sure you use small enough hooks and minuscule cut bait, FishBites or Gulp in order to fool these dock dwellers. In August, northern kingfish are especially populated around small rock jetties from Atlantic Beach to Rockaway. With the exception of short sea bass, kingfish, triggers and puffers have no size or bag limit in New York and can be kept for some good eats.

I’d be silly not to mention the freshwater bass fishing this time of year. When the salt doesn’t produce, I lean on my trusty big-mouthed friend, Larry for consolation catches. Topwater poppers and weedless senkos or keitechs will catch largemouth bass all day in our local ponds, whether you’re fishing in Wantagh or Brooklyn’s Prospect Park Lake.

As we all look to enjoy the final days of summer fishing in these coming weeks, stay safe and respect one another out there.

Catch you next Thursday.