The first week of the Lake Ontario Counties (LOC) Trout and Salmon Derby is over and Joe Miller of Honeoye jumped out to the early lead for the $25,000 Grand Prize with a 28-pound, 14-ounce king salmon reeled in off Point Breeze in Orleans County. Runner-up is a 27-pound, 9-ounce salmon weighed in by Don Damrath of Depew while fishing off Wilson. Top steelhead is a 12-pound, 9-ounce fish weighed in at the Boat Doctors in Olcott by Frank Abbott of Pittsburgh, Pennsylvania. Big brown so far is a 14-pound, 6-ounce Olcott fish weighed in by Maria Bentley of Derby – caught while fishing with team Gill-T Hooker in the Reelin’ for Cure contest for the ladies last Friday out of Wilson and Olcott. It was Matt LeClair’s Oh Baby’s Ladies winning the friendly Reelin’ competition with a score of 158.22 points for six fish based on 10 points per fish and a point per pound. There were 45 teams in this year’s competition. The Greater Niagara Fish Odyssey is moving into its final weekend and there are some impressive catches on the leaderboard for both the adults and the kids. Because there are so many different categories, we recommend you google the Fishing Chaos app and go to the website. Click on the Greater Niagara Fish Odyssey and scroll down to see what the leading fish are. There is still plenty of time to catch a big fish and the daily entry fee for adults is only $10; kids are free. You can find out more information at www.fishodyssey.net. The awards ceremony will take place at the NYPA Wildlife Festival at the end of September in Lewiston.

As far as the fishing action, trolling out of Wilson is currently in transition according to Capt. Joe Oakes of Salmonboy Sportfishing. He is waiting (and hoping) for mature salmon to move into the normal staging areas in 80 to 150 feet of water. During a Niagara County VIP event last week, he was catching browns in front of Wilson in 40 feet of water when his group caught the salmon that won as largest fish out of Wilson – a 23 pounder hauled in by Mike Casale of Lewiston (and without any help). Oakes says that there is still good fishing offshore in 400 plus feet of water for a mix of steelhead and salmon in the top 80 feet of water. Both spoons and flashers/flies are enticing fish. Out of Olcott, the winning VIP big fish was a 22-pound salmon reeled in by Assemblyman Angelo Morinello, fishing with Capt. Tom Pearse of Reel Adventures Sport Fishing. They were fishing in almost 500 feet of water between Olcott and Wilson. The king was caught on a flasher-fly 50 feet down, beating out Andrea Czopp of Kenmore with Destination Niagara USA and her 20-pound king she caught with Capt. Tim Sylvester of Tough Duty. Pearse says that there are some fish in the 150-foot to 300-foot depth range, but they are finicky. For LeClair and company in Reelin’ for a Cure, they fished a simple 5-rod program north of 30 Mile Point with spoons and meat, going 6 for 6 on mature salmon for the ladies and the ultimate win.

Walleye fishing in the lower river is still good to very good on the Niagara Bar and along the Stella Drift with worm harnesses according to Lisa Drabczyk with Creek Road Bait and Tackle in Lewiston. They are also catching a few walleyes off the NYPA platform, too. Mike Rzucidlo of Niagara Falls is back at it along the shoreline in the gorge with deep diving stickbaits to take some chunky walleyes this past week, fishing between 10 p.m. and midnight. In the smallmouth bass department, Drabczyk reports some decent fishing has been taking place around Fort Niagara, along the Coast Guard and near the green buoy marker. Crabs for live bait; drop shots, Ned’s, and tubes for artificial baits. Bass and walleye are still available in the upper river, too, with crabs for bass or worm harnesses for walleye in the live bait category.

Although summer is almost over, it doesn’t mean the Oneida Lake fishing season is over. FAR from it. The transition to Fall fishing will start soon, but here are three methods to catch Walleyes on Oneida Lake RIGHT NOW!

2. Jigging: Blade Baits, Jigging Minnows, Bucktail Jigs, Jig/Soft Plastic
Presentation: Vary your jigging cadence starting soft and getting more aggressive until you get bit and then repeat.
Location: The Walleyes will still sit on the deeper edges of main lake structure and shoals and on the upwind side of any structure in a stiff wind. Also, along the outside of weed beds and steep drop offs.
Baits: i1baits Bad Boy Blades in Copper Perch (Chester Copperpot), Black/Gold (Homey the clown), Purple/ Chartreuse. Lakeside Outfitters and Mad River Outfitters Jigging minnows in Perch and fire tiger.

3. Casting Worm Harnesses
Presentation: These shortened harnesses utilize an inline casting weight in quarter to half ounce size or more depending on the depth, the oversized blades act as a weed guard. Slow to medium retrieve speed works best, enough to keep the blade spinning the whole time.
Location: Cast over the top of weed beds or parallel along the outer edges.

Have fun with these three hot bite starters; they should keep you catching fish until October when the night wading season starts.

“Keep ur tip up”
-Matt Gutchess (The Awakening Angler on Instagram)

The fishing out of Oswego has become challenging this week. We’ve had a big storm system stir things up, which has spread the fish out.

The most productive water has been 100-300’ early in the morning. With the fish moving a deeper when the sun comes out.

Glow spoons have been good early. Shelly snack, double trouble and flounder pounder being the best.
Flasher fly combos are starting to dominate our spreads.

On the other side of the plant, fishing has been similar to Oswego. We recommend back and forth, starting shallow early, in the 80-120’ range, then moving out to 140-200’ later in the day.

The last few days many of the successful boats have stayed inshore the whole time, with most action seen in the morning. Most of the fish have been biting flasher flies.

The first salmon made their way up the river a few weeks ago. But don’t be too eager to come early unless you’re ready to hunt for them.

According to the Douglaston Salmon Run, king spottings and hookups have been far and few between. A few salmon have been seen daily, but we haven’t seen a decent push yet.

Try 300 fow water down 70 to 100 fow. Some kings are hitting, however browns, lakers, and steelhead dominate the catches.

Lakers are on the bottom and will hit cowbells with peanuts.

The LOC Fall Derby started last Friday, August 19th and runs until Labor Day. Make sure you sign-up for this one. The Grand Prize will put a whooping $25,000 in your pocket. All the info is on loc.org

Bass has been the targeted species in all the Wayne County bays. There is a small channel at East Bay for shallow water boats. Stay on the east side if entering from Lake Ontario. East Bay has pike and panfish.

Port Bay has largemouth action at the south end of the bay next to the DEC ramp.
There is also a boat and kayak launches at the north barrier road. Be careful…it’s bumpy.

The bass in Sodus and Port Bays are hitting worm rigs. Some top water baits have worked if the water is calm, however your best bet is the Senko rigs.

Canal current is stronger after our much-needed rain. Be careful launching. Widewaters has a kayak-canoe launch site next to the boat ramps. Plus…there is plenty room for parking trailers.

The bass are hitting along the weedy south sections of the canal. Bass boats were also casting near the Macedon lock. The catfish were in the deeper pools near Palmyra. They were hitting worms.

Inside water remains slow out of the Oak. Target 130 feet or less. There are a few salmon in there stuck to bottom to be had but you must work hard and long to get them to bite. The brown trout bite has been best on the inside water. Offshore fishing is decent from the 27 north line to the Canadian border at the 38 north line. As of Sunday, there has been a 2-mile patch of green Niagara River water out there moving around and holding steelhead and salmon. Also notable is it’s the time of year that fish are colored up and biting out of their normal temperature zone, says Ross. He caught two kings in 72-degree water this past week. What’s worked for them is spoons on the riggers and flasher-flies on divers. Copper lines with meat rigs are also working. It appears covering more water rather than working small areas has been best for catching salmon and steelhead offshore. Riggers were 35 to 60 feet down. 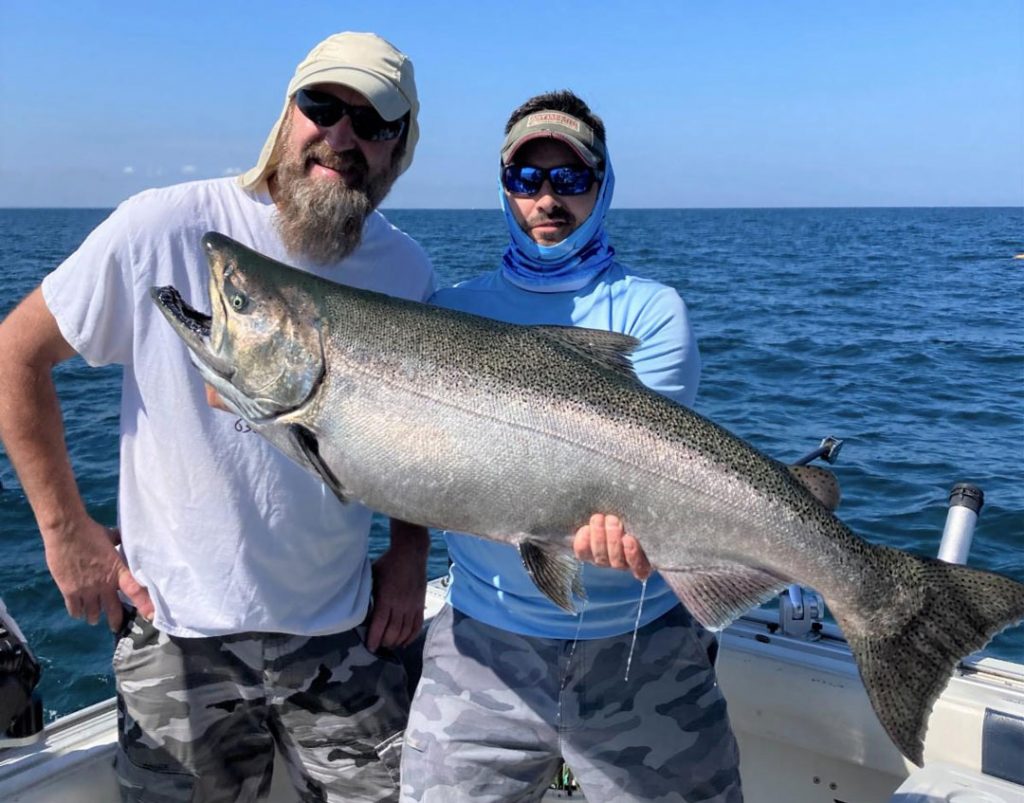 In the inaugural Twin Counties Summer Classic contest for boats fishing in Niagara and Orleans counties, Pro and Amateur teams had a month to select when they wanted to weigh in a fish and for the Pros it was seven total fish, while the Amateurs needed to weigh in five total for the duration.

In the end, it was Capt. Jeremy Sage and his team Locked Up (pictured above) winning the contest with seven fish weighing 156.06 pounds. Included in their catch was a 31.74-pound, 43″ king salmon. Second place was Capt. Dave Wolinski with Team Richmond 6 with 155.80 pounds of fish. Third place was Team Mister with Capt. Jon Forder with 155.74 pounds – very close to say the least.

In the Amateur Division, the best five fish was won by Team Mud Sharkz and Steve Galbraith with 112.11 pounds, followed closely by Team Double D led by Dan DeGeorge with 110.70 pounds. The contest ended last Sunday.

Congratulations to all the winners! View pics and videos from the tourney on Route 18 Tackle’s Facebook page

From Bill Hilts, Jr: the first week of the Lake Ontario Counties (LOC) Trout and Salmon Derby, Joe Miller of Honeoye jumped out to the early for the $25,000 Grand Prize with a 28-pound, 14-ounce king salmon reeled in off Point Breeze in Orleans County. Runner-up is a 27-pound, 9-ounce salmon weighed in by Don Damrath of Depew while fishing off Wilson. Top steelhead is a 12-pound, 9-ounce fish weighed in at the Boat Doctors in Olcott by Frank Abbott of Pittsburgh, Pennsylvania. Big brown so far is a 14-pound, 6-ounce Olcott fish weighed in by Maria Bentley of Derby – caught while fishing with team Gill-T Hooker in the Reelin’ for Cure contest for the ladies last Friday out of Wilson and Olcott.