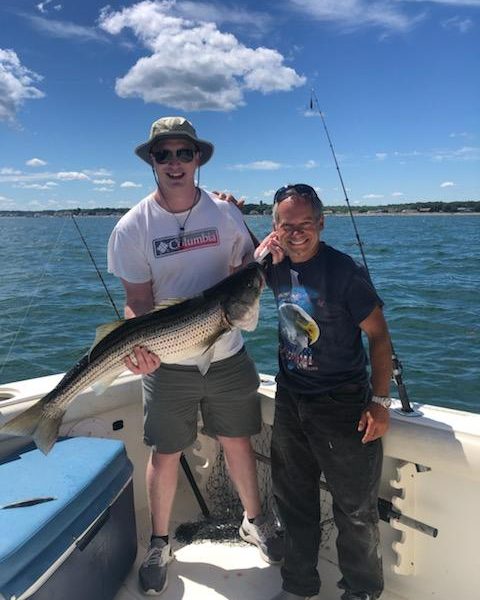 (Above) Alex Audrey (left) caught this big bass while fishing with Adventureandcatch Charters.

If you’ve hung your striper hat on expecting to find pogies and big bass than you might be disappointed! Speculation ranges from the appearance of bluefish to the incessant NE wind or some combination which has changed things a great deal. Regardless that seemingly inexhaustible bait appears to be in limited supply now but the good news is that the bass are still present, you just have to adjust your approach.

Captain Andy from Adventureandcatch Charters said that pogy schools, at least for the time being, have largely disappeared! He did hear of some schools in Rye Harbor and as you’d expect with them are bass and blues but as for the schools a coastwide factor – not lately! The Piscataqua River is still giving up fish to surface feeds with the object of the stripers attention consisting of young river herring, peanut bunker and squid. If you’re looking for prime baits than right now it’s mackerel or possibly harbor pollock in tight to structure. For macks Boone Island is holding some but you had better plan on being on the water really early and be prepared to chum! As for groundfish count on cusk at Platt’s with haddock less so. If you were impressed with last week’s photo of that 35” hake than the good news is that the skipper found a honey hole and there’s more where that came from so book now!

From Captain Bob of Seacoast NH Sportfishing came word that pogy schools are in retreat thanks to the one-two punch of a stiff NE wind and the appearance of gator blues! That news is not all bad as the bass will stay put and likely to spread out among ledge and rock along the shoreline and islands. As for bait, the captain recommends harbor pollock which are easy to acquire. Tuna have followed the sea herring onto Southern Jeffrey’s Ledge. The herring trail is easy to follow, just look for the whales!

Griffin from Saco Bay Tackle told me that area beaches such as Old Orchard, Ogunquit, Pine Point and Biddeford Pool have been a best bet for bass. Anglers trolling deep diving plugs are catching bluefish especially in the York area. Peanut bunker shoals are starting to filter into the area instigating blitzes. For pogies and big bass a few stragglers are still clinging to to the Harpswell and Brunswick area.

The calendar May show summer but cooler nights are starting some to think of fall and more specifically – the fall run of stripers! According to Captain Lou Tirado of Diamond Pass Charters small bait is starting to fill up rivers. The feeling is that when water temperatures drop a bit more the bite tinder box will explode! If the skipper had to suggest one spot it would be the Mackworth area, especially in transitional structure areas such as where sand/rocks overlap. Live and chunk mackerel are go-to baits during the day. Nights have been “lights out” with live eels, GT Eels and needlefish all accounting for good fish!

Want to get in on the bite? Find an OTW-approved Charter Fishing Captain in Maine!

Pogies may now be in thin supply but there’s no need to panic! As water temperatures drop and rivers swell with young river herring and peanut bunker expect surface feeds in Little Bay, the York River, the Saco River and Mousam River. However not all is rivers-or-nothing as surf anglers in some Maine beaches such as Ogunquit and Biddeford Pool are reporting good outings. For bait options, Boone Island is holding a few mackerel but they seem only available to the early riser/chummer. As for offshore herring, they have moved onto Southern Jeffrey’s and with them have gone the tuna. Platt’s doesn’t have pollock but it sure has cusk!