Strong northwest winds earlier this week has changed much of the water according to Capt. Mike Johannes of On the Rocks Charters out of Wilson. He reports that the brown trout bite that was close to shore needs a little time to set back up again. Your best bet is an offshore steelhead bite with a few kings mixed in. Over the weekend the bite was from the 29 to the 31 line out deep, but that changed to the 27 line on Tuesday straight out of Wilson. He found success in the top 65 feet of water primarily on spoons – greens and dark colors like geezer and spooks. He did catch a few fish on a flasher and fly. Use your Fish Hawk unit to pay attention to speed and temperature down deep. There has been a lot of current and one direction may make a difference. His speed lately has been 3.1 mph, but it varies from day to day. Look for changes. Use a good pair of polarized glasses to see breaks in the surface water and try fishing there.

Fishing is good right now for a mix of salmon and steelhead reports Capt. Joe Oakes of Salmonboy Charters. He is finding his success targeting waters that are over 400 plus feet with flasher-fly combos and spoons in the top 80 feet of water.

With the end of the Summer Lake Ontario Counties (LOC) Derby taking place on Sunday at 1 p.m., trout and salmon efforts will be ramping up to take over the lead for the Grand Prize $10,000 salmon. If you are going fishing, make sure you are registered – even for one day. The current leader is a 31-pound, 3-ounce Fair Haven king salmon reeled in by Joe Snook of Sterling. Top brown trout is an 18-pound, 5-ounce Rochester fish caught by Craig O’Brien of Rochester. The lake trout leader will be tough to beat, checking in at 29 pounds, 3 ounces, but a 27 pounder did come to the scales the past week. Leading laker taker is Jason Smola of North Syracuse. Tom Christen’s 15-1/2-pound steelhead is still tops. The Depew fisherman caught it out of Wilson recently. However, a 16-pound steelie was caught out of Olcott this past week by Capt. Kurt Driscoll, but the clients were not in the derby. You must be in it to win it. In the Walleye Category, Capt. Arnie Jonathan of Lockport is top dog with an 11-pound, 10-ounce Niagara River fish. That weight was matched this past week by another Niagara River walleye, but Arnie caught it first to maintain his lead.

In the upper Niagara River, there was a decent bass bite on crabs in front of Strawberry Island of late according to Capt. Chris Cinelli of Grand Island. He was fishing the stretch of water above Niagara Falls. Some good walleye action was also taking place in the emerald channel on a spinner and a worm according to Cinelli. In the lower Niagara River below the falls, Matt Wilson of Wheatfield enjoyed a smash fest on smallmouth bass around the green buoy marker at the mouth. He started in 40 feet of water with a southwest wind drifting into 17 feet on the flat. It was loaded with fish, enjoying a 30 plus fish day using all artificials. The best baits were a robo worm in natural shad color running it like a Ned rig and drop shotting on bass whenever he marked them on his graph using spot lock. The drop shot bait was a KVD Dream Shot. He did a few drifts in the river and from Stella to the fort were all showing fish. When the lake flips again, those bass will be flying into the river. He didn’t encounter any moss issues, which was great news.

Browns have been very active before the big blow early this week.

The best technique right now is targeting the bottom 15 feet, in 85-115 feet of water. Downriggers with cheaters have been very effective. Coppers from 300-400 feet have been taking fish too.

On top of great brown trout fishing, there are lots of kings starting to filter into the Salmon River out flow, and lake trout fishing remains great on Lake Ontario as well.

The salmon are feeding. Just find them and it’s “game on!” Salmon can be found from 150-650 feet of water. But they have been most active at 42-53 degree water. Find that range in the column and you’ll find feeding kings.

Salmon have been readily taking mag spoons. Dirty Broomstick, UV Gator, and Yellow Tux have been good. Flashers and Meat rigs have been the best option thou. Scumline, Kryptonite, Valium and Bullfrog are our recommendations this week – pulling illusion, pro Am, and Dirtygoose twinkies. 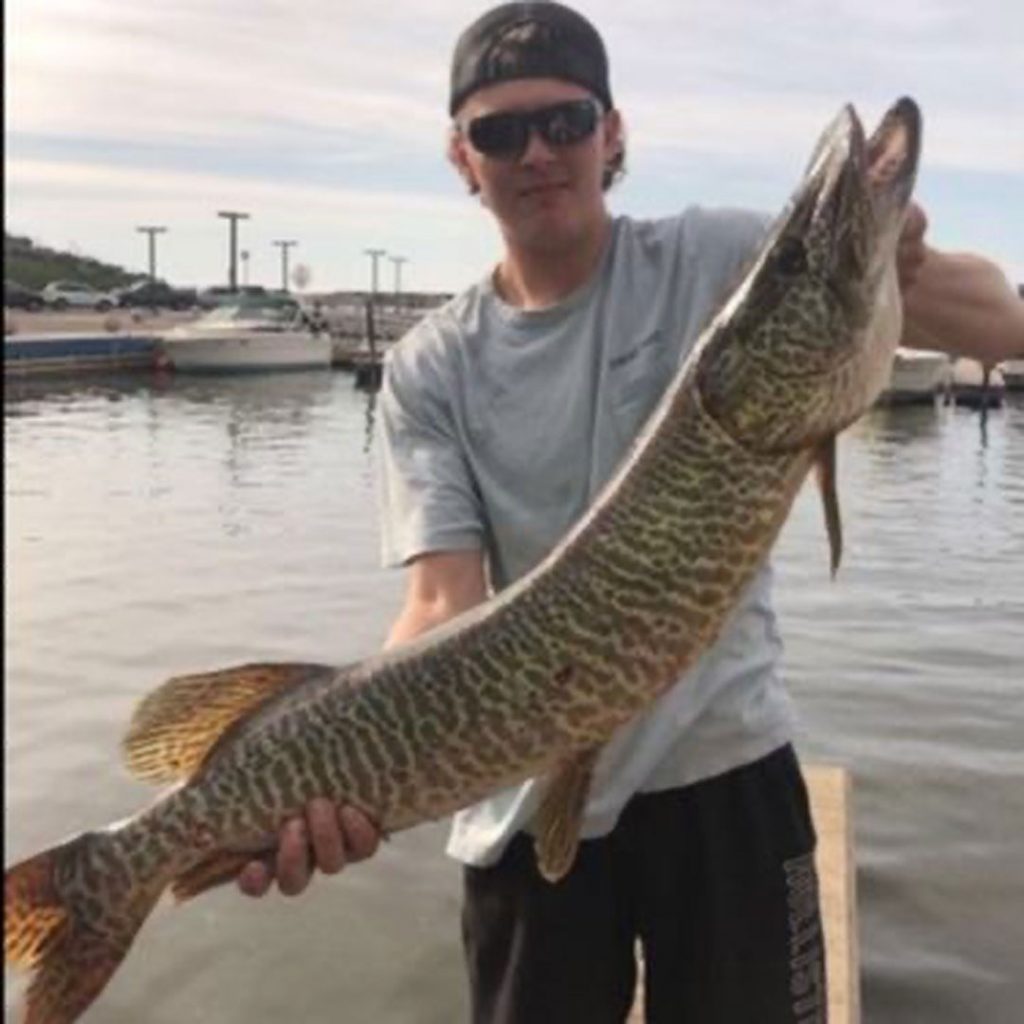 Nate B. caught this noteworthy tiger musky in the Oswego harbor last week. After a few quick pictures he released it back into the water for other anglers to enjoy. For a list of places to fish in Oswego County, visit visitoswegocounty.com/fishing-hunting/fishing/where-to-fish.

Many Pro-Am teams stayed straight out from Sodus Bay last week. The salmon bite is still on from Port Bay west to Hughes’ Marina.

The fleas are everywhere so use heavier line.

Don’t forget the LOC Summer Derby which continues through July 31st. LOC Summer Derby
Awards ceremony will be this Sunday at Riley’s Bar and Grill on the south end of Sodus Bay on Ridge Road.

Currently, four out of the top five salmon in the LOC contest were caught in Wayne County waters.

There is still perch action at the north end of Port Bay. Use the north DEC ramp where the lower water level hasn’t affected the launch site.

The weed cutters are in Port Bay which stirs-up the largemouth’s hang-out. Cast near the docks using worm rigs or after they cut the weeds go back to where the lunkers swim.

Sodus Bay still has perch action at the north end and in deeper water between the islands. Use perch eyes or small white jigs tipped with spikes.

The warm water next to LeRoy Island has pike action. Cast with large spoons or fish with live pike minnows.

Large cats are hitting near Palmyra in the deeper pools of the canal. Use shrimp or worms with 10lb. braided line and 10-pound leaders. Hooking some 2lb. cats on that set-up is nothing but fun.

The monster bucket mouths are on the south side of the canal at Widewaters. You can launch at the county park west of Newark on Route 31.

Capt. John “Troutman” Oravec from Tight Lines Charters sent in these pictures taken this past weekend.
Capt. John has been finding these big loner mature kings while providing limit catches of chunky brown trout to his family groups.

Captain Bob Songin of Reel Excitement Charters posted a video report on Facebook
The best fishing he’s seen has been off-shore at 27 1/2, 28 1/2 and 29 line with both mature and immature kings and some steelhead. Nothing specific is working spoon-wise. He’s running 50′, 65′, 80′ down with 44° at 80′. They fished everything from the 14 line to the 9 line. The NE troll was dynamite, not so much with SW troll. Listen to his full report.

Captain Jeremy Sage of JDS Custom Charters sent in these pics as evidence to his caption “Fishing is HOT”! 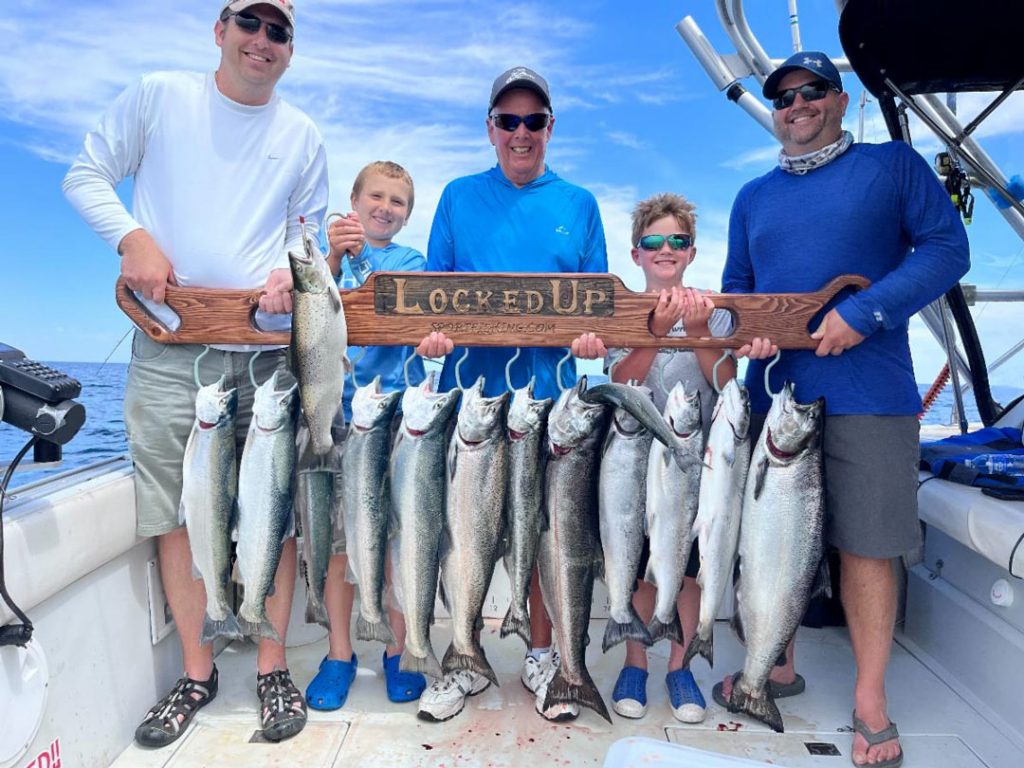 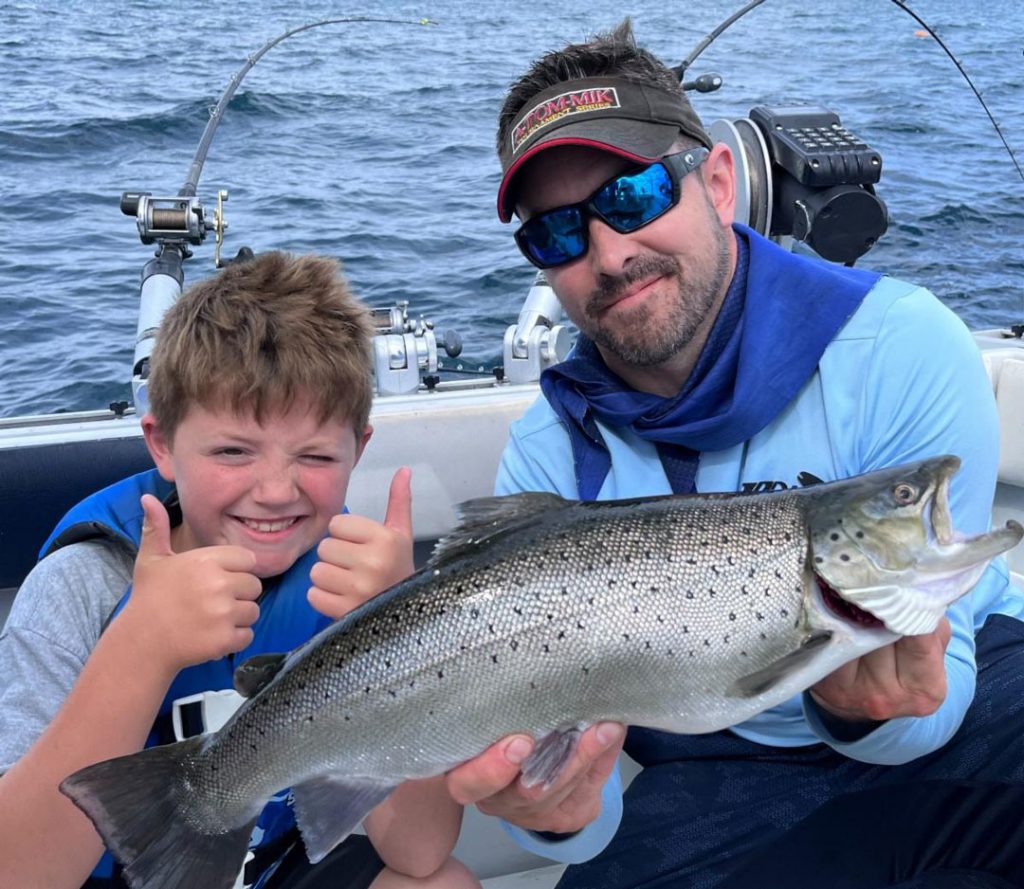