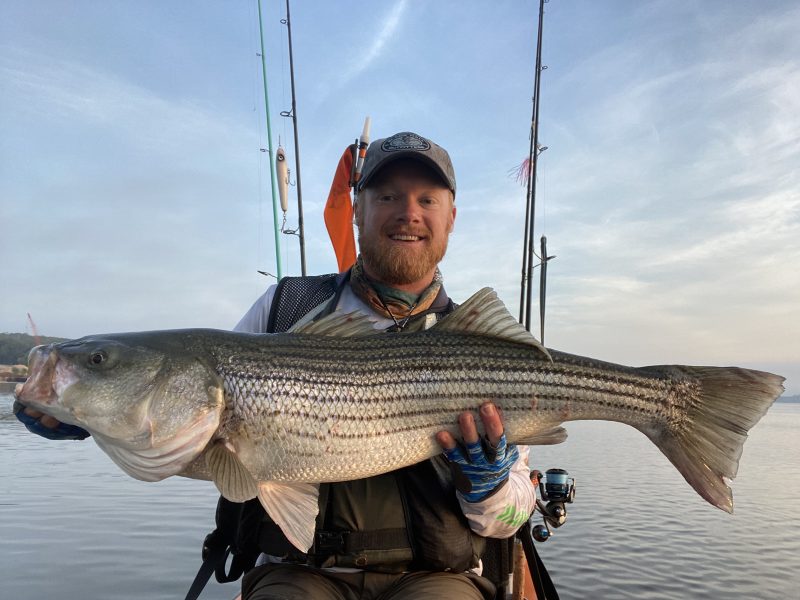 (Above) Matt Stone (@sunrisekayakfishing) uses his kayak to find and locate a bass bite regularly.

Matt, at Black Hall Outfitters in Westbrook is starting to see the bass set up in their summer patterns, making low light situations or fishing deep during the day your best shot at success. Three-waying a fresh scup, bunker, or eel on the reefs has been producing some nice fish, along with GT eels, which seem to work just about all the time. The bottom fishing has remained consistent, with plenty of sea bass and scup, along with some quality fluke for those that are putting the time in. Sea bass anglers should look to the lesser-known humps to find a better keeper to short ratio, and the same can be said for the fluke fishing. There has been plenty of small bait and Spanish mackerel around, which portends well for the upcoming hardtail season in a month or so. Also, Black Hall Outfitters is now a state certified weighing station for official, certified weights up to 1,000 pounds. Bring in your inshore and offshore catches!

Heather from Black Hawk Sportfishing reports that not much has changed this week, with another excellent week of fishing. This whole week was full of excellent porgy fishing, a good mix of sea bass, and a couple more quality fluke up to 11.5 pounds! The After Work special trips continue to be very strong, with huge bluefish and plenty of stripers in the mix. These trips have been so strong lately, that they plan on adding some more to the schedule. The Black Hawk will continue to run family trips that are on the shorter side and geared toward younger anglers, but they are filling up quick, so book asap! They will continue to run two trips on Saturday’s and Sunday’s and will keep fishing every weekday. Be sure to check their website for the exact schedule and to book a spot!


Mike Roy at Reel Cast Charters reports that they are still catching plenty of slot and over-slot class striped bass, along with more cows showing up on each trip. Live bunker has been the ticket, but they have been able to trick a few nice bass on plugs during the right times/tides. They continue to see more bluefish in the mix this year, and they are willing to hit just about any offering. Summer fishing is only getting better! Give Captain Mike a call to book a trip asap!

Dan, at Dan’s Bait, Tackle, and Charters in New London reports that the water temperature has risen to a point that local scup anglers are having no issue finding some nice fish from the rocky shoreline. There are still plenty of striped bass in the area, with parachute and diamond jigs getting it done as the fish start to transition to deeper water. Live and chunked bunker also continues to produce as consistent as anything, and there have also been some huge bluefish blitzes around the bunker schools that have provided some incredible fishing during their charters.

Chris, at Elser Guide Service told me that the big bass fishing remains stellar in the western sound, despite the warming weather. With the water warming up you really need to fish bait or troll, but time of day doesn’t seem to matter, regardless of the weather. Your best bet is to work the deeper bunker schools or the deeper reefs and rips. Trolling the tube and worm has been successful, and still allows you to use lighter tackle instead of wire. The topwater/light tackle game is tough, but if you work around the bunker schools around dawn or dusk you may get one to eat a plug or a fly. There are also more bluefish in the area than the last few years, with most coming in around 3-6-pounds. As the snapper blues and peanut bunker grow, the topwater bite should start to light up in the next month.

Fisherman’s World in Norwalk reports that there are still good numbers of striped bass in the area, despite the warming water temperatures. There have been solid reports coming in from the beaches, around the islands, and out in deeper water. Livelined baits have continued to be a top producer, but anglers tossing plugs at first and last light have found success as well. If you’re out there during the daylight hours, your best bet is drifting live baits or trolling spoons in the deeper water; while after dark, fresh chunks continue to produce. Fluke fishing has been tough, but dedicated anglers are still finding a few solid fish. Sea bass fishing has been good on the wrecks outside the islands, while scup fishing is on fire for shore and boat anglers. The offshore anglers are reporting decent tuna action south of Block and Montauk on the troll, along with a few coming on jigs/plugs.

Want to get in on the bite? Find an OTW-approved Charter Fishing Captain in Connecticut!

The extreme heat wave this week may have been tough for anglers to deal with, but the fish haven’t seemed to mind. Both the striped bass and the bottom dwellers have started to transition into their summer patterns, but there has been no shortage of fishing action across Southern New England.

Rhode Island anglers have no shortage of big bass, with the usual summer Block Island bite reportedly being stronger than ever. If you don’t want to travel too far, you shouldn’t have an issue finding some solid bass on the reefs and rips off Newport, and in/around the South County breachways. The best bet for fluke is still to steam out to the island, as the local reports have started to slow, but there is no shortage of sea bass and scup close to home. Offshore reports are starting to pick up quite a bit, as some bluefin are starting to show up relatively close, and some bigger bluefin have invaded the Cape. A good slug of yellowfin has also shown up on the canyons, and there is no shortage of shark activity.

Connecticut waters have no shortage big striped bass, but the fish do appear to be transitioning to their summer haunts on the deeper reefs and rips. The lower CT River is still producing some big fish, so it’s worth a look, but be prepared to go work the adjacent reefs if need be. Local surfcasters are also starting to find better results from Groton to Niantic. Connecticut’s summer tautog season has kicked off and has been fruitful for those that are actually targeting them, while sea bass and scup remain plentiful.