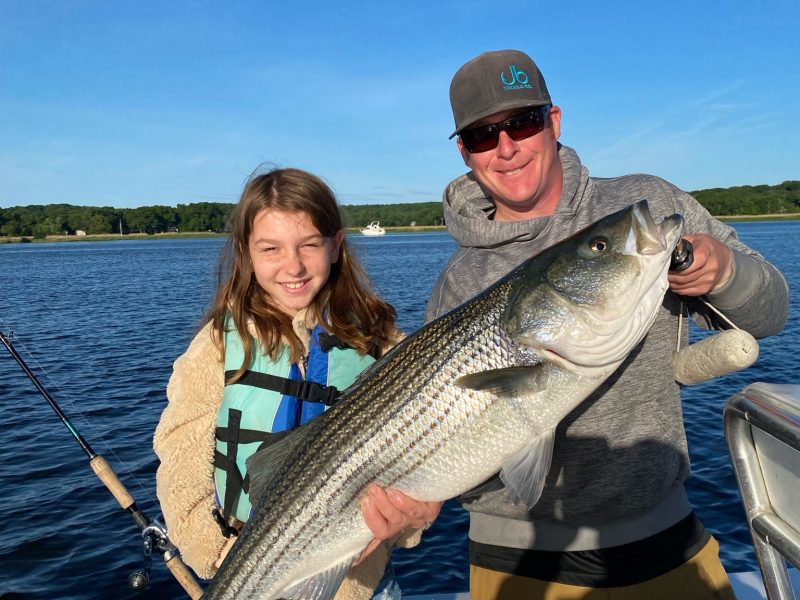 Matt, at Black Hall Outfitters in Westbrook told me that the beat continues across Central/Eastern CT, with the Connecticut River holding big numbers of striped bass. There are some true giants starting to show up, along with loads of fish around slot-size. Durning the dawn and dusk periods you can get these fish to eat topwater plugs and/or soft plastics, but during the day it has been a live bunker game. Luckily, the bunker has moved in well, and is easy to find. The reefs out front are also starting to hold a few big fish that have been falling for topwaters and live eels. The fluke action has been decent in 30-50 feet of water on white and chartreuse bucktails tipped with Gulp, while the sea bass action has been steady on slow pitch jigs.

Heather from Black Hawk Sportfishing reported that they had another busy and successful week on the water. The porgy trips are as consistent as ever, with plenty of scup and a few nice weakfish remaining in the mix. The fluke trips have started to show more consistency, but it remains highly dependent on drift conditions. The bluefish and striper daytime trips have also been steady, with plenty of keeper bass and the bluefish starting to settle into their summer haunts. The after-work bass trip last week started off slow, but got going nicely with loads of big bluefish, a surprise keeper cod, and some nice keeper bass. They will continue to run these trips on Friday afternoons and may start to add a few on different days. They’re still running two trips on Saturdays and Sundays at 5 AM and 1 PM, and they will be sailing daily as of the 17th. They are also bringing back some sunset cruises and seal watches, so be sure to check their website for scheduling of all trips!


Dan, at Daniel’s Bait, Tackle, and Chartersin New London, reports that the best fishing of the season is just getting started in his neck of the woods. Striped bass action has been good from Norwich Harbor all the way to the mouth of the river and just outside. Swimbaits, soft plastics, topwaters, and sandworms have all been producing; while live bunker is pure gold if you can locate some. Anglers fishing after dark have also seen some large bass taking live eels on the near shore reefs this week. Scup action has been pretty good a bit offshore in deeper waters and remains quiet closer to home as we wait for the water temperatures to rise. Sea bass and fluke action has picked up a bit in local waters as well, especially around Fishers and not too far from the Race.

Andy, of Carolynn Ann Sportfishing told me that his season has gotten off to a strong start, with some strong striped bass fishing in the Race. He is finding good numbers of keeper bass on both sides of the tide, along with some big bluefish to keep things interesting, and some large scup for the coolers. Things should only improve from here, be sure to contact Andy for a trip soon!

Joe, at Diorio Guide Service told me that the fishing has is in full swing, with plenty of striped bass action, including a steady improvement in size class this week. If you can find live bunker it will be the top producer, but large topwater plugs and soft plastics have been working well in the dawn/dusk hours. The gator blues have spread out a bit, but they are still all over the area and mixed in with the bass. More bunker and subsequently more large bass should show up very soon, so be sure to book a trip asap!

Mike Roy at Reel Cast Charters is still finding a solid bass bite in the river, especially if you can locate the bait, but they remain a bit finicky, so the dawn/dusk hours are best. The reefs have started to see some better, sea lice covered bass; while the deeper reefs and rips are holding big numbers of slot fish that are willing to eat a diamond jig. Give Mike a call asap to book a trip while he still has some openings!

Chris, at Elser Guide Service told me that the bluefish have started to thin out, but you can still find some gators harassing the bunker schools near the harbor mouths and mid-sound. The big bass bite has been excellent when you find the bunker schools, or if you are willing to fish after dark with fresh chunks. Chris had fish to 42-pounds this week around Stratford, but they were there one day and gone the next, so you need to log some time and hope you come across them. Chris has also seen an improvement in the fluke fishing, including fish to 26-inches off Bridgeport last week on jigs tipped with Chartreuse Gulp Mullets.

Fisherman’s World in Norwalk reports that the striped bass fishing in the area shows no signs of slowing down. Anglers trolling mojos and bunker spoons have found fish all the way to the mid-40-pound class, along with very strong numbers of 25+-pound bass, with one lucky angler even managing a fish that easily bottomed out a 60-pound boga grip. The usual hotspots from 11B to the OB and to 28C are producing consistent catches on the troll, while the nighttime chunk bite is also starting to heat up closer to home. Some larger schools of bunker have shown up around the islands and beaches and have brought some better bass and gator bluefish along with them. The area inside the islands is also producing some consistent weakfish catches on pink bucktails, soft plastics, and sandworms. Fluke action has gotten more consistent in the area, with good catches in 40-50 feet of water around Cans 24 and 26. Sea bass and scup anglers are also reporting some consistency for both species on the wrecks and rockpiles in 30-40-feet of water. Freshwater anglers in the area are reporting better bass and crappie action in the Saugatuck Reservoir with the water temps warming, while trout anglers continue to find no shortage of action in the local rivers.

Striped bass continue to pile into Southern New England, providing ample opportunities for anglers across Rhode Island and Connecticut. Striped bass of mixed sizes can be targeted across Rhode Island, with steady action in and around the Bay, with the Bay producing an enormous number of big fish without having to travel too far. Gator bluefish can also be found spread out in the same areas, and while the bonus weakfish bite has slowed a bit, they are still popping up with some regularity around the Bay. The South County beaches and breachways are also starting to wake up and has surfcasters dusting off the waders/korkers. Bottom anglers are finding some improved fluke action around the Island, and we should be seeing the South County beaches start to wake up any day now. Sea bass season opens for the R.I. party/charters this weekend, providing another opportunity to fill the coolers a bit. Connecticut anglers can continue to take advantage of steady bass and bluefish action in and around the tidal rivers, including a recent push of big, migratory bass in central/eastern CT. Fluke fishing seems to be better to the west than the east, but it seems you can find good ones anywhere in the state if you get the right conditions; while the sea bass season has opened and early results are strong on the deeper reefs, rockpiles, and wrecks.