Joshua Blackford of Westerville Ohio caught a 27-and-a-half-pound king salmon on lucky Friday, May 13 while fishing out of Olcott to win the $15,000 Grand Prize in the spring Lake Ontario Counties Trout and Salmon Derby. The Ohio guys were trolling a Raspberry Carbon-14 Moonshine spoon that they had bought that morning at the Boat Doctors in Olcott. That same morning, Toby Betzer of Selinsgrove, PA caught a 27-pound, one ounce salmon while fishing out of Wilson with Gone Coastal Charters to win the salmon division. Top brown trout was a 16-pound, 4-ounce Oswego fish reeled in by Dean Pysher of Easton, PA. Silas Amlaw of New Lebanon, NY caught the first-place lake trout, a 22-pound, 15-ounce fish from Jefferson County. However, Sean Mooradian of Youngstown wished he had entered the derby. He caught a 31-pound lake trout last week near Fort Niagara. Biggest walleye in the derby was a 10-pound, 15-ounce fish reeled in by Brandon Myers of Vestal while fishing near Henderson Harbor. Check out www.loc.org for the complete final leaderboard. The 10th Annual Wilson Harbor Invitational (WHI) Salmon Tournament went off without a hitch last weekend and the winning team overall was Team Tomahawk led by Jonathan Ross of Hamlin. Winner of the week-long Trout and Salmon Slam was the Dirty Goose team led by Casey Prisco of Pulaski. The next big tournament on the Lake Ontario docket is the Skip Hartman Memorial Pro-Am Salmon Tournament out of Wilson and Olcott June 3-4. Find out more details at www.lakeontarioproam.net.

Things are starting to get back to normal on the local fishing as many of the derbies and tournaments have slowed up a bit. The timing is good, too, because Capt. Joe Oakes of Newfane reports that we seem to be in the transition period already where we are going from spring to summer fishing. The water is the same everywhere now but that may change with this week’s weather. Best thing to do now is spread out your gear and cover as much water as possible since the fish are scattered. Bites are coming on spoons, flasher-fly combinations, as well as meat rigs. Last weekend, Oakes caught fish in 50 feet of water and in 280 feet of water. He says that the fishing he was experiencing is what he would expect in early June.

There are still a few trout swimming around the lower Niagara River, but the best spot continues to be right off the mouth of the river. The area around the green buoy off Fort Niagara continues to be producing plenty of Coho salmon, lake trout, the occasional king salmon or two, brown trout and smallmouth bass. According to local skipper Frank Campbell of Lewiston, he says to spread out presentation in the water column to allow for yourself to pick up multiple species. Mike Rzucidlo of Niagara Falls and Tony LaRosa of Lewiston used MagLips trolled fast about 8-10 feet down for Cohos. The lake trout hit on the bottom, more in the 24-28-foot depth range. They fished jigs near the Lewiston sand docks to get bass, walleye and they even caught a sturgeon nearly 5 feet long. The fish hit a 5-inch zoom jig and was released quickly. They are a protected fish. In the Upper Niagara River, bass action continues to be good on stickbaits or swimbaits. Tommy Ortolano at Lake Effect Bait and Tackle in Tonawanda reports that bass are being caught inside the buoys off Ontario Street on blade baits. The foot of Ferry Street is still producing walleyes on paddle tail plastics like Storm 360 baits and minnows. Anglers are also pulling in the occasional laker and rainbow.

This week, fishing conditions on Lake Ontario have been tougher than average. But with recent winds from the west, we expect fishing to pick up as the shoreline waters “color up.”

Click Here of the 10 day Forecast
The following report is courteous of Capt. Mark Ledden of Driftwater Fishing.

Fishing in the Mexico Bay region has really heated up. It’s the time of year where you can pick the species you want to target: kings, brown or lakers!

We have been hitting fish anywhere from 10 to 180 feet of water. Rods fishing the surface (with 5 color cores) have been taking silver fish, with the new “Opti-cowbells” on the bottom catching lakers.

Click Here of the 10 day Forecast
The following report is courteous of Capt. Mark Ledden of Driftwater Fishing.

Fishing in the Mexico Bay region has really heated up. It’s the time of year where you can pick the species you want to target: kings, brown or lakers!

We have been hitting fish anywhere from 10 to 180 feet of water. Rods fishing the surface (with 5 color cores) have been taking silver fish, with the new “Opti-cowbells” on the bottom catching lakers.

Click Here of the 10 day Forecast
This week’s report is brought to you by Capt. Zack Rayno of Hat Trick Charters

In Oswego, the brown trout have turned less aggressive or else they’re more spread out this week. But, fishing for kings has been on fire, with lakers and cohos also in the mix. With the Oswego River lower and warmer, there hasn’t been a lot of colored water to focus on, except by the harbor.

However, salmon are being found in good numbers in the waters outside of the harbor. 80-350 feet of water has been productive, but each day is a little different. We have also been seeing lots of browns out of the deep.

Browns have been chewing on stickbaits and spoons. Black ice, dirty broomstick , tuxedo, and UV diehard have been good spoons. The best baits for kings have been Stingray sized spoons on 2-6 color lead cores and slide divers. Doctor, tuxedo, yellow and lime tux’s, and NBK have been the best colors.

Spring is a transitional time for the pond, when walleye, northern pike, and pickerel can be caught either trolling or casting. Spring offers some added excitement too – you never know what species is going to hit!

A few charters out of Sodus Bay were close, however one charter captain netted all six, which makes for a fun trip for the clients fishing Ontario waters.

Currently, the presentation working in Wayne County waters is to fish straight out from Sodus Bay or west towards Pultneyville.

Today’s North/West blow will create mudlines for the rest of the week, making a better clarity of water for fishing. The browns would rather hide in stained water then a gin-clear lake.

The Coast Guard Station launch is open at Sodus Point. The Bear Creek launch will not be opened until Memorial Day.

Lake Ontario tributary regulations: Three fish in combination and not to include more than one Rainbow Trout (or Steelhead) and One Brown Trout.

Perch have been hitting in Sodus and Port Bays. They are scattered so you must move around. Use white 2- inch shad rubber.

Some walleye are still hitting between Newark and Eagle Island in Sodus Bay. Fish on the southside using Sonar blades or purple buck-tail jigs. You can also catch walleye by the buoy at the Sodus Bay channel. That has been an evening bite.

Bullhead and crappies have been hitting at Bay Bridge…fishing from the bridge or boat.

All persons on board a recreational vessel less than 21 feet in length (including canoes, kayaks, and rowboats) must wear a USCG–approved PFD from November 1 to May 1.

Anglers have been fishing from shore near the Lyons lock. The canal runs parallel to Route 31 and there are some pull-offs for parking.

Crappies and bluegills are hitting at Widewaters and as soon as the water heats-up the bass will be on the bite. We are talking six plus pound largemouths.

The 2022 New York State fishing guide can be found at https://www.dec.ny.gov/outdoor/7917.html for downloading and printing at home. Production of hard copies is finished and have been delivered to License Issuing Agents. Hard copies can be requested by emailing FWFish@dec.ny.gov.

Mariners are advised that, conditions permitting, all portions of the New York State Canal system are scheduled to open Friday, May 20, 2022, at 7:00 a.m. for the 2022 Navigation Season. If adjustments to the schedule are necessary, the public will be notified accordingly. There are no tolls or fees for recreational use of the Canal system this year. LEARN MORE 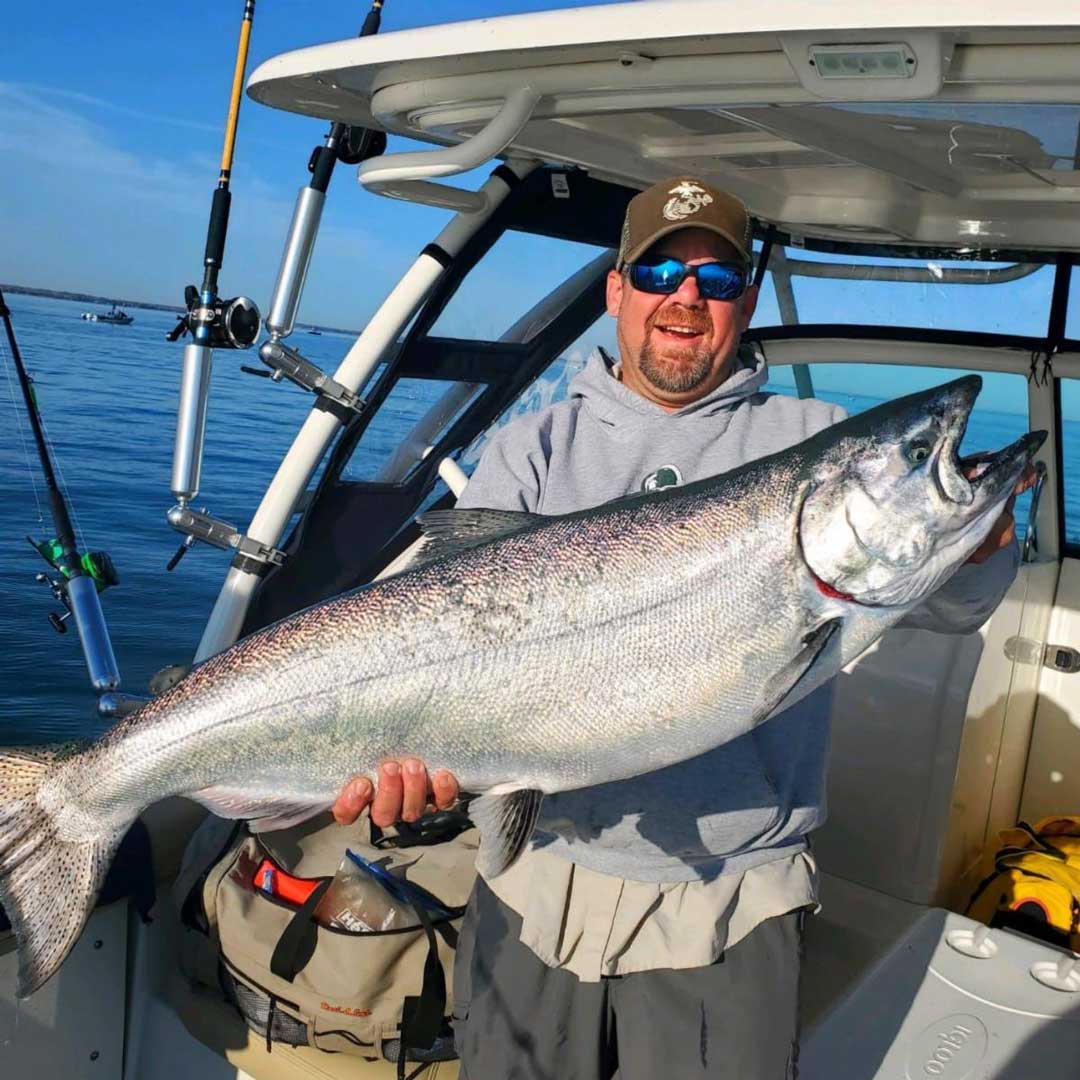 The Spring LOC Derby finished this weekend with the winning fish caught in Niagara County and weighed in at the Boat Doctor in Olcott. Joshua Blackford of Westerville, OH (pictured above) landed a 27lb 8oz salmon to capture the $15,000 Grand Prize aboard the Lisa K on a Wire/Dipsey/Moonshine combo. Congratulations, Joshua! Read the complete results at https://loc.org/leaderboard-current.