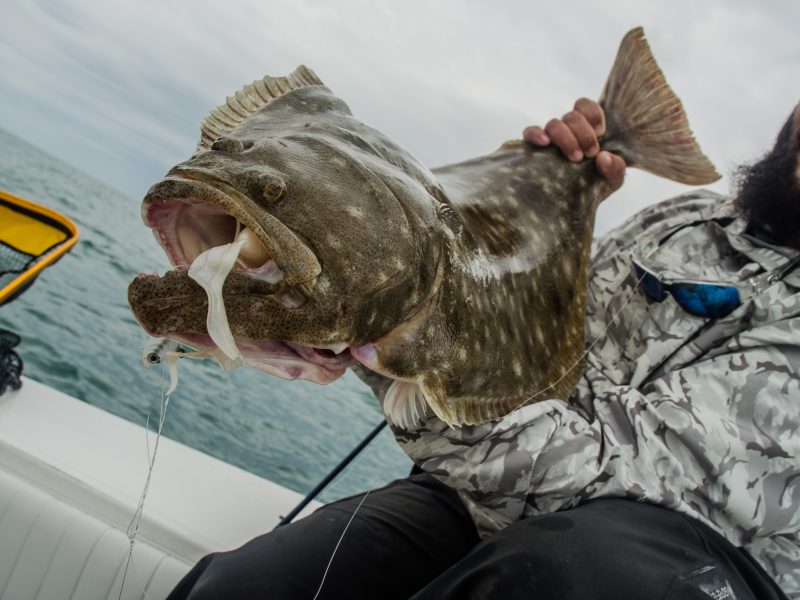 We can finally fish for summer flounder as the season opened this past week.  Anglers had mixed results depending on the tides.  Since the start was much earlier this year, it’s imperative to fish the warmer water.  The biggest fluke reported was from the Ocean city area and measured 6.8 pounds.  Striped bass fishing has been steadily heating up and there were many reports of larger specimens hitting the South Jersey grounds.  Bayside has been very good with a range of shorts to 40 inchers being landed on soft plastics and paddle-tails.  The Cape May area had some reports of nice striped bass and drum over the past week.  May is typically an excellent month for drum in the Delaware Bay.

Hook House Bait & Tackle in Toms River reported quite a few striped bass caught off IBSP surf on fresh bait.  Clam has been working the best for keepers, but there are plenty of short bass around.  There have been some nicer bass released on plugs and these fish have been hitting at night.  The bay has some nice fish to 40 inches as anglers caught on the backside of Tices on white paddle-tails.  There were some reports of fluke in the bay, but overall it’s been a tad slow due to the cooler water temperatures.

Lacey Marine in Forked River had good reports of striped bass action off Island Beach State Park and the Harvey Cedars area of Long Beach Island for anglers throwing plugs late in the evening.  There were a few fish in the 40-inch range caught during the night tides before midnight.  Fluke fisherman had a tough go for the past week as anglers worked the usual bay spots to produce some keepers, but overall slower action.

Jerzey Buoyz Sportfishing reported good tog fishing to end the season last Saturday as the crew worked a variety of wrecks for the entire day.  The skipper said sea bass action was excellent, so they will be looking forward to the start of the season in the coming weeks.

Creekside Outfitters in Waretown had some reports of striped bass being landed along the Sunrise beach area of Forked River on trolled plugs.  A few anglers were able to box a couple of 28 inchers for the day.  Fluke fisherman have been slowly picking the first keepers of the season at the usual spots off the BI, BB, and the main channels.  The incoming water has been very cold, so don’t expect “all-out” action.


Reel Reaction Sportfishing out of Waretown was out on Sunday for some catch-n-release on striped bass to 27 inches.  The charter had the bass on small Yo-Zuri poppers, soft plastics, and live bait.  It was steady action through the duration of the trip.  The skipper will be running special weekday afternoon striped bass and fluke trips until the school year finishes in mid-June.  Give them a ring to get in on the action.

The Super Chic out of Barnegat Light will be sailing in a few weeks for the start of the sea bass season.  The crew is ready to go and has limited availability in May.

Tony’s Bait & Tackle in Manahawkin received some positive bay fluke fishing reports from anglers fishing in Barnegat Light, Ship Bottom, Brant Beach, and the Great Bay.  The bridges have been producing striped bass to 30 inches during the night tides and the LBI surf has been red hot for large striped bass on plugs.  The Barnegat Light, Harvey Cedars, and Loveladies have been producing on the night tides.  Anglers trolling out front have not found that many, if any, bites so far on striped bass, but it should be any day.

Tackle Direct in Egg Harbor City reported good flounder fishing along the Great Bay, parts of the Mullica River, and the Tuckahoe river.  Small jigs tipped with Berkley Gulp shrimp and swimming mullet have been the best baits for flounder.  There are plenty of striped bass around with some keepers in the mix.  Zoom baits and paddle-tails have been having the most success, followed by swimming plugs and poppers.

Tight Lines Bait & Tackle in Somers Point had excellent reports from Somers Point and Ocean City for flounder over the past week as the water has been warmer.  There were quite a few close limits on boats as overs and slots were being landed.  Most of the action has been in the 5 to 7 foot areas and the usual spots and thoroughfares are producing.  Anglers have been landing a few small bluefish and plenty of striped bass along the backside.  Surfcasters casting clam baits are also finding striped bass with regular success.

Badfish Charters in Ocean City said skipper has been getting out on some of the glassy mornings to find decent striped bass action along the west side of the bays and shallower flats. Artificials have been the mainstay of Capt. Brian and he said he has some openings in the coming weeks, so give them a ring.

The Cape May and Wildwood areas reported some nice action with the easterly winds and bigger bass on the beaches.  Shucked clam had anglers releasing some striped bass to 48 inches, while fisherman plying the backwaters and sedges were finding keeper flounder to 20 inches.  The action on the flounder front has been a little slow due to the cooler temperatures in the bay.  Anglers using mackerel strips and minnows were finding some biting flounder off the shallower areas adjacent to the ICW.  The night fishing for weakfish has been hush-hush, but there are definitely some fish around if your throwing pink soft plastics.  Some of the first drum have been reported by anglers anchored on some of the typical sloughs for the season as my contact was a little quiet on the locations.

• Want to get in on the bite? Find an OTW-approved Charter Fishing Captain in New Jersey!

The best bet for the weekend would be to hit striped bass in the bay, surf, or inlets.  The other option would be to work most of the shallow bay areas for early season flounder.  But the issue complicating our fishing this weekend is the strong Nor’easter that will impact most of New Jersey from Friday evening through Monday.  If you have to get out, I would definitely fish some of the sheltered bay areas.  Fishing from land would probably be the best bet as the winds will be howling for boaters.  Finding some isolated sedges in the backwaters and working small jigs or bucktails tipped with Gulp, fish strips, or minnows may just work in the not-so-pleasant weather.  Good Luck, Be Safe, and Tight Lines!