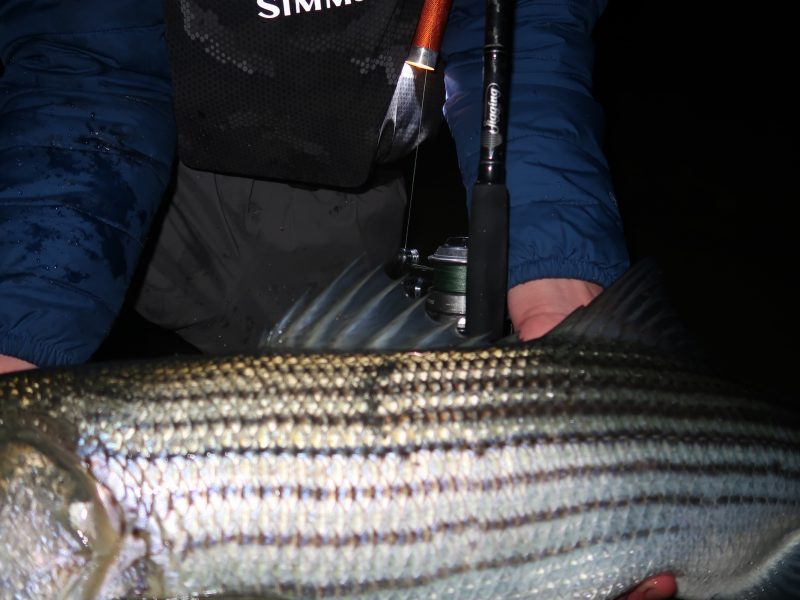 I’m sure a few very hardy anglers may have tried to hit the bay or under a bridge somewhere in South Jersey, but the weather gods have not been kind and most reports non-existent.  We had 40- to 50-knot winds over the weekend, only to subside to 20 to 30 knots through the better part of the week. So ocean fishing has pretty much been zilch over the past week, but there was some activity in the backwaters late during the week.  As the winds began to subside by Wednesday, I did receive a few phone calls of fluke being caught on the outgoing tides with Gulp and minnow baits. Even with the colder temperatures in most of our bays, they can’t stay in lockjaw mode forever as they would starve – so hopefully your lure is in front of them when they decide to eat.

Hook House Bait & Tackle in Toms River reported slow action early in the week due to the recent blow, but the bite rebounded later in the week.  There were some reports of anglers catching striped bass along the Route 37 bridges and on the backside of Island Beach State Park around the Tices area.  Fluke fishing has been pretty slow as bay conditions were almost un-fishable towards the start of the week.  But with calmer wind conditions, anglers should hit the areas around the “BI” and “BB” of Barnegat Bay.

Lacey Marine in Forked River had limited reports due to the past week’s weather display, anglers working the beach prior and just as the storm started reported decent fishing on striped bass to 40+ inches off Long Beach Island.  The backside of Island Beach State Park continued to have a good number of striped bass.  Fluke fishing has been quite slow due to the extremely cold water temperatures and lack of sun for the bay.

Jerzey Buoyz Sportfishing reported a slow week due to being cancelled with the heavy winds and sea conditions.  The skipper is going to be working full-tilt for sea bass and striped bass, once the season opens and winds subside.  There are some dates available in June for both species, so give them a ring.


Creekside Outfitters in Waretown had minimal reports this past week as very few anglers attempted to fish in the 20- to 30-mph winds and rain.  The weekend looks a tad wet, but should be fishable.  There have been some reports of quality size blowfish in the usual areas from the “BB” buoy to the “BI” buoy.

Reel Reaction Sportfishing out of Waretown was fluking this past week prior to the blow and the skipper found some nice fluke to 5 pounds.  The charter released 30 fluke while keeping 8 for the dinner table.  The night bay trips have been a chore to get out, but when the wind lets down there are some nice striped bass around to 27 inches.

The Super Chic out of Barnegat Light is about ready to start fishing with the sea bass opening the following week.  The crew is poised to get back on the water for 2022.

Tony’s Bait & Tackle in Manahawkin had some reports of white perch action in the lagoons of Beach Haven West, but it has slowed quite a bit.  The bay was churned up pretty good and the shop only had a few diehards make it out for fluke in which they reported slow action.  There are good numbers of keeper fluke south of Little Egg inlet in the shallows.  Striped bass are still around inlets and bridges, but better action was reported off the beaches prior to the blow.

Tackle Direct in Egg Harbor City reported a slower than normal week due to the nasty conditions both wind and waves.  The fishing prior to the Nor’easter was heating up with good fluking in most of the backwaters and tidal rivers.  There have been some nice ones landed in the 5 to 7 pound range.  Striped bass fishing has been decent in the Mullica, Great Bay, and areas around Atlantic City.  Night time seems to be the best for anglers working clam or bloodworms, but there also have been quite a few taken on Zoom baits. There has been word of some weakfish being caught from the Avalon area during the night tides.

Tight Lines Bait & Tackle in Somers Point had good numbers of fluke being caught before the weekend windstorm as anglers had some fish to 6 pounds in the backwaters on Gulp, minnow, and bucktail combinations. But once the storm set in, it’s been very slow as anglers have not had the opportunity to get out and fish. The shop is fully stocked with baits and bucktails to target both striped bass and fluke. They also wanted to remind anglers that the sea bass season opens up this upcoming week, so get ready with rigs and clam baits.

Badfish Charters in Ocean City has been tied to the dock this past week with the heavy northeast winds and waves. The crew has been focusing on striped bass in shallow water with good results on the fly prior to the weather. The skipper said he will be back out once the winds begin to subside.

The Cape May and Wildwood areas reported quite a few drum being landed along some of the sloughs and flats in the Delaware Bay. Most of the action has been on clam, but a few anglers reported decent bites on crabs. Striped bass fishing has been excellent off the beaches with clam along the Delaware Bay and Cape May beaches.  But since the most recent storm, reports have been non-existent as most anglers have not been out. Flounder fishing has been good in the 4 to 8 foot sections of the backwaters. Gulp, minnows, or strips of mackerel were top flounder producers.

• Want to get in on the bite? Find an OTW-approved Charter Fishing Captain for New Jersey

The best bet for the weekend will be to hit the backbay channels, tidal rivers, and small creeks during the outgoing tides for fluke.  The bite should rebound with calmer winds and warmer temperatures by the end of the weekend. White, chartreuse, and pink Gulp baits were working the best prior to the weather, so you would think the same colors should work again as the bite picks back up.  Anglers soaking clam baits off the surf should have excellent shots at stripers for most of our oceanfront, but the northern end of Long Beach Island and parts of Island Beach State Park would be the top areas to set up. Another good bet for the weekend rebound is the drum fishing off Cape May as it has started.  Clam, white crab, or blue crab baits should be onboard if you are in the hunt for the Delaware Bay boomers. Good Luck, Be Safe, and Tight Lines!