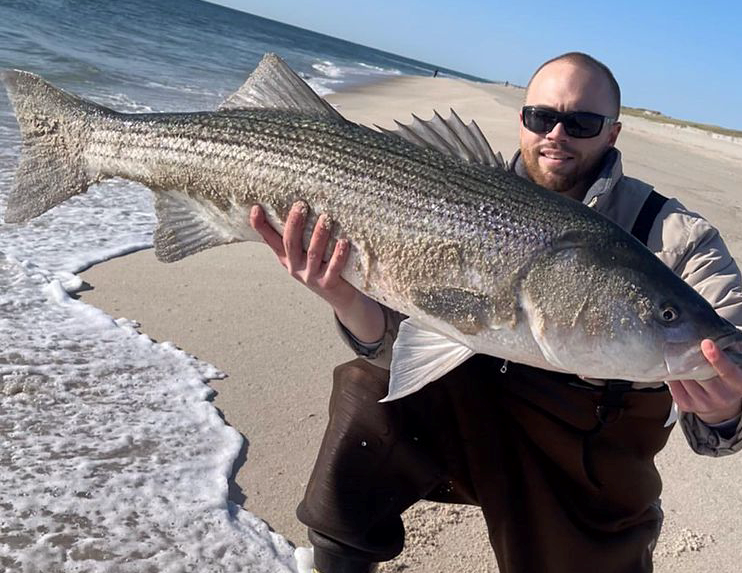 (Above) Michael Gallagher shared this photo of his big striped bass caught in the surf with Grumpy’s Bait and Tackle in Seaside Park.

The incredible striper bite continues in Raritan Bay, bass and blues can be found in the surf from Sandy Hook down to Island Beach State Park and the fluke season is off to a great start in the rivers and bays.

For those wanting to bottom fish, ling, cod and winter flounder are also in good supply.

Capt. Jay Richardella of Side Job Charters out of South Amboy said the bass fishing in Raritan Bay is lights out with all of his fish caught on the troll or on jigs. He’s been running morning and afternoon trips out of Lockwood Boat Works getting early limits then playing catch and release. Mojos, stretch plugs and shad rigs have all been working.

Capt. Phil Sciortino at the Tackle Box in Hazlet said more blues are being caught in Raritan Bay but stripers still outnumber them by a wide margin. Shads, spooks, flutter spoons and trolling are all catching bass.

Mike Pinto at Giglio’s Bait and Tackle in Sea Bright said the fishing is very good right now with more bass showing up in the surf there and in Monmouth Beach. A good number of them are keepers in the 10- to 12-pound range. Clams are catching most of the fish, but a few have hit plugs.The Shrewsbury and Navesink rivers continue to produce stripers and the blues have appeared in both rivers as well. Pinto also received reports of fluke in Sandy Hook Bay.

Mike Gleason at TAK Waterman in Long Branch said there’s fish pretty much everywhere. There’s a nice mix of bass from 8 to 25 pounds from Raritan Bay down to the Shrewsbury and Navesink rivers and on the local beaches. Clams are the way to go for the beach fish while Doc Spooks, flutter spoons, plugs, shads and metal-lipped swimmers are working in the bay and rivers.Gleason also reported fluke in the Shrewsbury and Navesink rivers.


Bob Matthews at Fisherman’s Den in Belmar said the fluke season is off to a good start in the Shark River.Many more keepers are being caught from the L Street Pier and the Den’s rental boats and anglers are happy to have some fish to take home. Matthews reported that the party boats like the Big Mohawk are traveling north to get in on the striped bass action while those bottom fishing are doing well with ling and cod. Surf anglers, he said, are seeing a lot more bass with bait outperforming artificials. Clams, bunker chunks and blood worms will do the trick.

Capt. Steve Spinelli of the Skylarker out of Belmar said the stripers are starting to spread out from Raritan Bay and he was catching them off Sandy Hook on the ocean side.

John Vafiadis at The Reel Seat in Brielle said Raritan Bay is on fire with stripers and more of them are showing up in the Manasquan River. There’s more bluefish in the river as well. He’s also had good reports of bass on the beaches to the south but the local surf is still a bit quiet. The Reel Seat, he said, will be at the Berkeley Striper Club’s Annual Fishing Flea Market on Sunday, May 14.

Jason Szabo at Fishermen’s Supply in Point Pleasant Beach said the fluke bite in the Manasquan River is spectacular. Light jig heads around a half-ounce tipped with Gulp are all that’s needed. The outgoing tide is best, he said.Ironically, Szabo said the anglers are having no trouble getting fish 18 inches or above. Finding the slot fish has been the challenge.Szabo said stripers are biting in the river as well, especially at night, on soft plastics.

Chris Parlow at Capt. Bill’s Landing in Point Pleasant Beach reported their first tuna weigh in of the season. Capt. TJ and the crew of the End Game Tournament Team brought a 178-pound bluefin to the scale that was caught on a whole squid in the Hudson Canyon. He also reported bluefish in the Manasquan River and they’re being caught along the Dog Beach, at the Railroad Bridge and up to the Point Pleasant Canal.

Capt. Kenny Namowitz on the Mimi VI out of Point Pleasant Beach has been bottom fishing and doing very well with ling, cod and winter flounder.He’s got openings for bottom fishing trips next Monday through Thursday.

Frank Giacalone at Gabriel Tackle in Brick reported fluke fishing is off to a great start in the Manasquan River with a lot of anglers limiting out. He also said the surf bite for stripers is improving daily with clams taking most of the fish.And the bass action continues in Barnegat Bay, he added, with stripers at the Mantoloking Bridge on blood or sandworms and soft plastics. Night or early morning are the best times.

Pete Kupper at Charlie’s Bait and Tackle in Normandy Beach said there are some big bass being caught on the beaches. All of the action is on clams. If you’re catching dogfish, he added, move to another spot.The stripers are still biting back in the bay, especially in the lagoons, coves and by the bridges. Soft plastics and blood worms are working for them. Fluke, bass and bluefish can also be found at the Manasquan Inlet and back through the river. With the new regulations, fluke anglers are having an easier time getting their limits.

Ray Kerico at Grumpy’s Bait and Tackle in Seaside Park said the striper fishing on the beaches, especially at Island Beach State Park, is very good. The size of the bass is what’s surprising, he said, with fish up to 42 inches being caught on clams.There are also bluefish in the surf, up to 12 pounds, hitting diamond jigs.The fluking in Barnegat Bay, he added, is just phenomenal, with plenty of legal fish. Gulp and bucktails will do the job. He also had a 26-inch weakfish weighed in at the shop earlier in the week.

• Want to get in on the bite? Find an OTW-approved Charter Fishing Captain in New Jersey!

If the weather cooperates, and that looks a little iffy at this point, bass and fluke are good targets.

The striper bite is still on fire in Raritan Bay and the fishing has been good in the local rivers and on the beaches. Clams are the bait for beach fish while plugs and soft plastics are working in the rivers and bays.

Fluking in the Shark and Manasquan rivers is off to a great start with jig heads and Gulp all that’s needed.