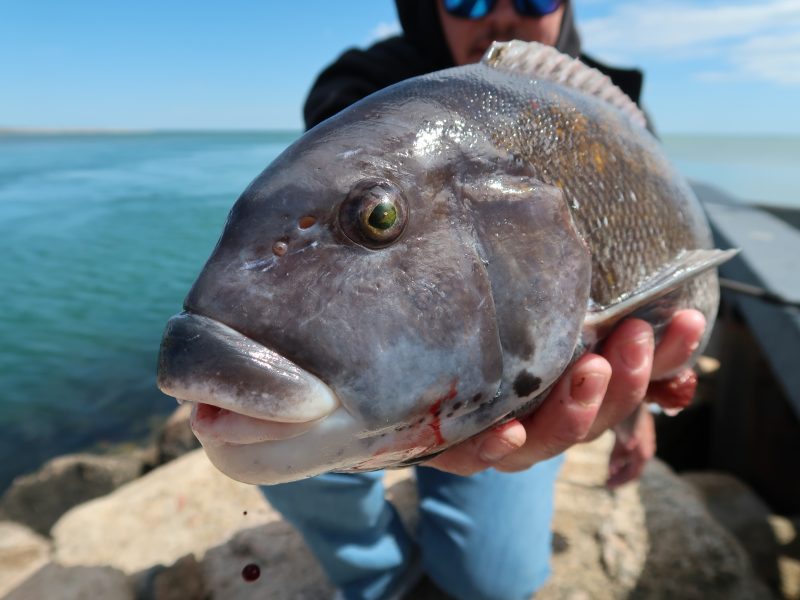 The spring smorgasbord continues with squid, scup, tog, and stripers.

Sounds like the squid fishing really ramped up since last week. According to Evan from Eastman’s Sport and Tackle, green squid jigs in 20 to 25 feet. Amy at Sports Port Bait and Tackle said the nighttime bite has been even better than the daytime bite for the squid.

Tog fishing is still very good. Evan said he’s hearing of the best action in Buzzards Bay, more so than the Elizabeth Islands or off the South Side. Kagan at Red Top Sporting Goods reported very good togging in Buzzards Bay. Amy at Sports Port reported good tog fishing inside the Canal, for fishermen tossing green crabs from the riprap. She said there has also been some fishermen catching tog off Collier’s Ledge.

Scup are beginning to move in, nipping at the tentacles of the squid. These first scup often bring the biggest ones of the year, what fishermen down south call the “ocean porgies,” compared to the smaller “sand porgies” that steal our baits all summer long. Peter at Larry’s Tackle said some of these big porgies are moving into Edgartown Harbor, along with some squid.


While fishermen in Edgartown Harbor are catching squid from the docks, Amy at Sports Port wasn’t sure whether or not there was any land-based squidding happening on this side of the sound yet.

Striper fishing is good and getting better. Some of the highlights from this week’s reports include an angler on a south-side beach reporting “every cast” action with 24- to 25-inch stripers in the middle of the afternoon this week, said Evan. More slot fish are being reported, with some in the Canal, said Red Top’s Kagan, a handful on the South Side, and more in Buzzards Bay. Still, the 20- to 24-inch schoolies are the most common catch, and they are stacking up around the bays and harbor mouths, taking soft plastic jigs and even topwater plugs.

These schoolies seem to be harrying the good numbers of small baitfish in the salt ponds (mostly silversides) though there have been some bunker schools spotted, which we’ll want to keep an eye on when more bigger bass start to arrive.

Captain Ross of Cape Cod Charter Guys said 18- to 26-inch bass are migrating through Buzzards Bay right and things are just beginning to heat up.

Bluefish are just rumors at the moment. Traditionally, they came in with the squid and scup, and would have bellies full of both when they were hauled onto the south-facing beaches. Whereas the bluefish arrival used to be a Mother’s Day event, Peter at Larry’s says he now looks to Memorial Day for the blues, which seem to hang closer to the bunker schools.

Want to get in on the bite? Find an OTW-approved Charter Fishing Captain in Cape Cod!

On the Vineyard, stripers are moving into the ponds to feed. Cinder worm spawns are just starting in earnest, but the peak is likely to be the full moon in about 10 days.

And the freshwater is still going strong. Kagan at Red Top said Peter’s Pond got its final stocking of trout this week, which inlcuded some heavy brown trout. Rainbows are still biting well on gold spoons, said Amy at Sports Port. Anglers are split on whether the largemouth bass are on their spawning beds yet. It’s just about that time for the largemouth, but there may still be a small window of pre-spawn fishing left. The smallies are most likely bedded up and defending their nests aggressively. Pickerel are biting well, Kagan said, and he had some good luck recently with big perch.

It’s the height of the spring schoolie run, and there’s the off chance at a bigger one. OTW Producer Jack Burke found a 34-incher mixed in with a bunch of 20-inchers one evening this week. The bays and salt ponds are the best bet for action, but fishing somewhere like the canal, or out in Buzzards Bay in a boat may provide a better shot at a larger striper. Though, if I was a gambling man, I’d say our first push of larger stripers will be right around the full moon. In the meantime, there’s plenty of fun-size schoolies to enjoy.

And one announcement I’m excited for: we’ve started a podcast. Every other Monday, we’ll be checking in on Spotify, Apple Podcasts, and YouTube talking fishing with anglers from throughout the Northeast. The first episode, with Captain Rob Taylor, is available HERE.