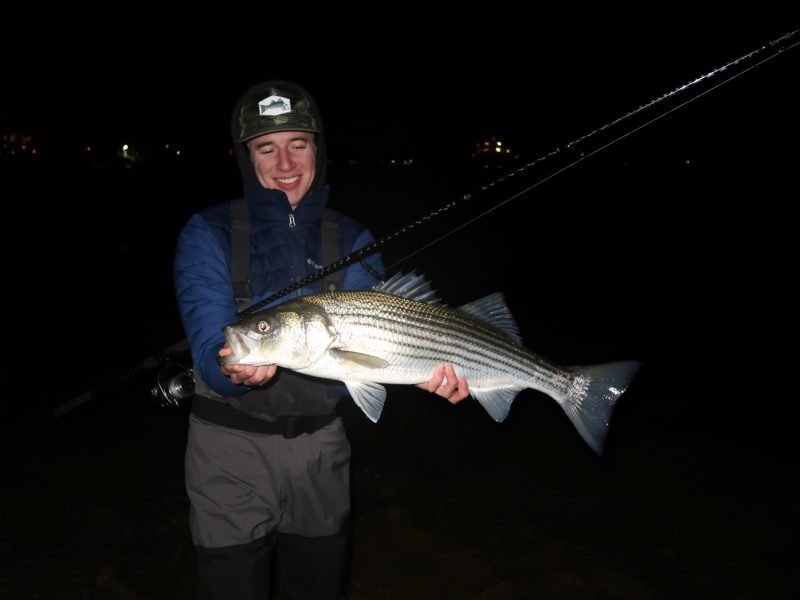 While wind hampered fishing efforts this past week, it certainly didn’t stop more fish from moving into Cape Cod waters. As conditions return to fishable, anglers are finding that more slot and “over-slot” – stripers larger than 35 inches – have moved in.

The schoolie bass have Cape Cod surrounded. There are fish on the South Side, Buzzards Bay, Cape Cod Bay, in the Canal, and even on the Back Beaches.  The fish are of decent size, with most of the schoolies in the 22- to 24-inch class. There’s been good numbers of 28-inch and bigger fish on the South Side and in Buzzards Bay. According to the report from Red Top Sporting Sporting Goods, stripers as large as 20 pounds have been taken in the Canal.


The Sports Port crew heard similar reports of larger bass in the Canal, along with good numbers of schoolies along the Cape Cod Bay beaches, and on the South Side.

The squid run seems to be dying down, which is typical for this time of year. There will still be some caught around lighted docks at night, but the big, bucket-filling fishing that boat fishermen enjoy in Nantucket Sound is wrapping up. One of the signs that the squid run is winding down is the influx of large scup. Squid apparently don’t like getting their tentacles nipped by the ravenous porgies.

The big porgies will be setting up over South Side and Buzzards Bay structure. Targeting them is a lot of fun, provides lots of fillets, and will help scout out where the sea bass are holding as we get closer to the opening of the black sea bass season.

Tog continue to bite well on green crabs.  I didn’t catch any tog this week, but I did observe some, thanks to the live, underwater web cam at the Massachusetts Maritime Academy. That could prove to be one of my favorite time-wasters. Right now, it’s mostly bergalls, with the occasional tautog drive-by, but as waters warm, we’ll probably see some more variety.

Captain Mel True of Fishnet Charters reported: “With the nasty winds we did not get out this week. Later last week in Buzzards Bay, we had a big school of topwater activity with sea bass and stripers under the birds.”

Bluefish have been reported in Buzzards Bay and off the South Side, mixed in with the stripers. Look for the southwest winds this weekend to improve the bluefishing, especially on the South Side. It hasn’t been a great bluefish year to our south, but that’s not necessarily a indicator of how our bluefish run will be. Blues, unlike stripers, do more of an east-to-west migration,

Those southwest winds should be good for all of our fisheries after so much strong northeast. Plus, the full moon is coming up. I expect to be talking about 30-pounders and the first big fish blitzes of the year by this time next week.

Tog and scup are the best bets for bottom fishing, unless you want to run north to the haddock grounds. Haddock fishing has been good around Stellwagen.

When the southwest cranks, find a beach where the wind is in your face and throw poppers and metals in search of bluefish. If the blues don’t show, switch to soft plastics and minnow plugs, and some striped bass will be sure to oblige.

For bigger stripers, you’d be wise to hunt down a bunker school, as these will act like magnets to the bigger bass when they first show up.

And, one last message from our friends at Red Top:

“Stop by Red Top Saturday June, 4th between 10am- 3pm for our St Croix and Penn Demo Day! Customers have the opportunity to cast St Croix Rods and Penn Reels on the canal under real life conditions. Any Penn reels purchased will receive free Berkley X9 line, backing and rigging and receive a 10% Red Top gift card on any St Croix rod purchased that day. Additionally, Savage and Sebile Lure will be buy 3 get 1 free.”