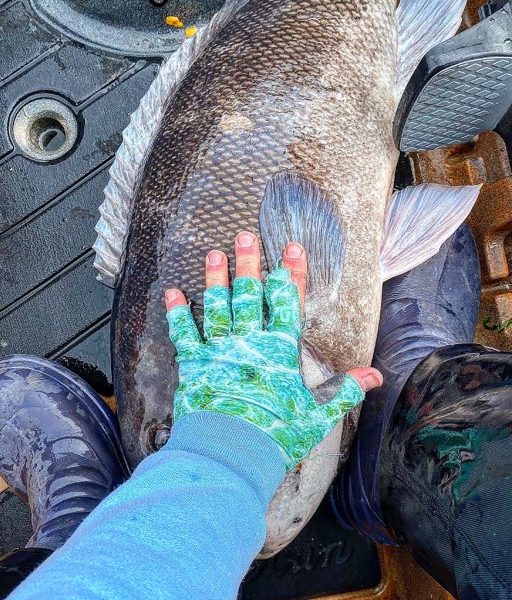 (Above) Matt Stone of Black Hall Outfitters caught and released the fish of a lifetime this week; a 23-pound tautog!

Matt, at Black Hall Outfitters in Westbrook has seen an improvement in local fishing firsthand this week, as he landed (and released) a fish of lifetime, a 23-pound 2-ounce tautog from the kayak! Congratulations once again Matt! Unfortunately, the tautog season will be ending in CT this weekend, but anglers looking for a limit could still try their luck in Rhode Island. Matt has also heard of more slot stripers showing up in and around the river mouths. Water temperatures a still lagging a bit behind, but some better fish seem to be trickling in right on schedule. For freshwater anglers, some new vegetation growth is starting to sprout, and providing some good topwater bass action on the warmer days. Areas around points and larger structure have also been producing a good bass, perch, and trout bite on jerkbaits.

Andrew, at Fishin Factory 3 in Middletown said that he has been selling plenty of sandworms for anglers that have been finding stripers from the river mouth to Enfield. The river has fished well despite some tough conditions, and those conditions are improving by the day! The herring runs throughout the river area also starting some larger bass, especially for those sneaking out after dark. White perch, pike, and smallmouth have all started to bite well on the river, and while the shad bite has been slow due to the conditions, it seems to be trending better each day. Saltwater anglers are starting to report better cod action around Block Island, and most are also finding some nice tautog in the same areas. Trout anglers are still reporting steady action, with some good reports coming from the Salmon River, Farmington River, Chatfield Hollow, and Cedar Lake.


Mike Roy at Reel Cast Charters has continued to target holdover bass, and he told me that they are starting to push out to the river mouths. Big numbers of school bass have been common, and most trips are seeing plenty of slot fish in the mix as well. Fin-S fish and Sluggos have been the top producers, and he has also found some better fish willing to hit topwater offerings around the herring runs. We are on the precipice of prime spring bass season, so be sure to reach out to mike for a trip asap!

Fisherman’s World in Norwalk reports that the local bass bite continues to steadily improve, despite less-than-ideal weather conditions most days. The local beaches are producing plenty of school bass, along with a few slot fish, and some better fish are following the herring up Norwalk Harbor. Soft plastics have remained the top producer, but some larger swimming plugs and sandworms are starting to produce well. The Housatonic River continues to hold the largest concentration of bass, but they are spreading out across the region by the day. Reports from trout anglers are still strong, with great reports from the Norwalk River, along with the Mianus, Mill, Rippowam, and Saugatuck Rivers. The Saugatuck Reservoir is producing a steady pick of crappie, perch, and bass; along with a few trout coming from some areas of deeper water.

Want to get in on the bite? Find an OTW-approved Charter Fishing Captain for Connecticut

Spring fishing across Southern New England has remained on schedule for the most part, despite less-than-ideal weather conditions. Striped bass fishing is the main draw for most anglers, with a solid bite throughout the salt ponds and tidal rivers across Rhode Island and CT, along with an improving number of fresh fish showing up out front along the beaches and river mouths. Small soft plastics and sandworms can be trusted to fool a bass just about anywhere, while some better fish are now willing to hit a larger plug around the herring runs. Saltwater anglers in Rhode Island can continue to cash in on a quality spring tautog bite, along with improved cod action around Block Island. Options for freshwater anglers remain plentiful across both states, with steady reports of bass, perch, pike, crappie, and trout. Shad enthusiasts have been most affected by the tough weather and conditions, but a steady improvement over the past few days should give hope to those that are looking to soak a willow leaf this weekend.