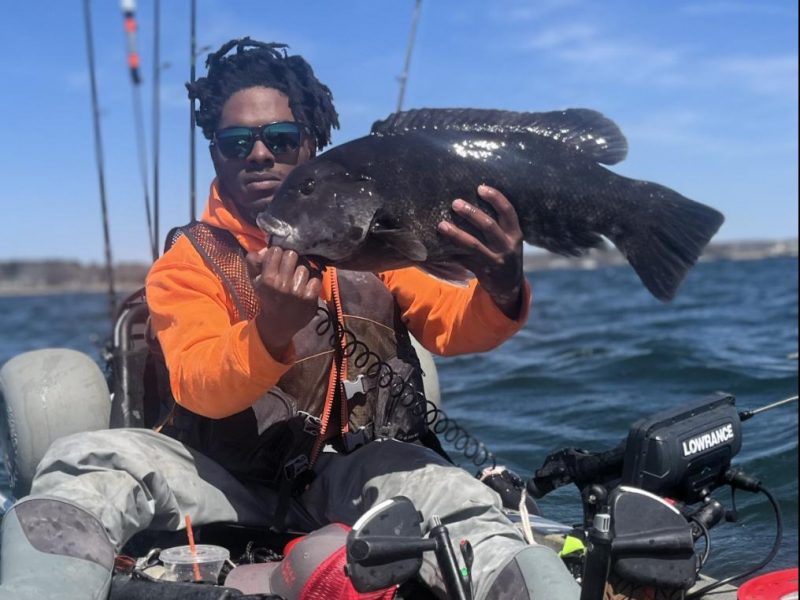 (Above: Cris Carter with a nice tautog from his trip with Rhode Island Kayak Fishing Adventures this week.)

Matt, at Black Hall Outfitters in Westbrook has found some strong freshwater action over the past week, including post spawn pike that have been willing to hit spinnerbaits and chatterbaits. Smallmouth and largemouth action has been consistent on jigs, jerkbaits, spinners, and senkos. Most of the bass have been tight to structure or around warming weeds and/or sand later in the day. Saltwater anglers are finding more striped bass that are willing to eat, but most are still holdovers, so the spring run isn’t here just yet. The spring tautog action has really started to improve as the water temperatures have risen into the low to mid 50’s. Anglers have found success on structure from 20-45 feet of water, especially those who are willing to bounce around if they are not catching right away at their first spot.


Andrew, at Fishin Factory 3 in Middletown said that there has been a strong striped bass bite going on around the mouth of the river for anglers dunking sandworms. The river has been up and down, and still has some clarity issues in the upper stretches, so those areas have been slower for both bass and shad. The weather seems to be settling down for the weekend, so flows should clean up and we should start seeing some local shad catches. Saltwater anglers are reporting a slow pick of winter flounder from the eastern Sound, with most catches coming on sandworms. Blackfish reports have improved this week, with anglers reporting limits from Rhode Island waters, as well as in the central to western Sound. Cod reports have improved out by the Block Island windmills, and there have been some nice tautog in the mix out there as well. Freshwater anglers are reporting steady trout action in the stocked streams and ponds. The Salmon and Coginchaug Rivers, along with Black Pond, have produced good trout catches this week on spinners, Rapalas, worms, and small shiners. The shop is now open seven days a week and fully stocked for the spring season!

Mike Roy at Reel Cast Charters has started his spring season and has seen a nice uptick in school striped bass action this week, as the water temperatures finally start to rise. Big numbers of school bass have been common, and most trips are seeing plenty of slot fish in the mix as well. Fin-S fish and Sluggos have been the top producers, but as the water continues to warm, he expects to see increased action on topwater and large swimming plugs.

Fisherman’s World in Norwalk reports that the local striped bass bite has picked up quite a bit over the past week. The warmer days have seen bass feeding on the shallow flats, while most of the adjacent beaches are holding fish that will take small soft plastics and swimmers. The Housatonic River is also producing consistent action from the mouth to the dam, and these fish have been more willing to hit larger swimming plugs. The tautog bite has picked up a bit, and the fish have been coming from a wide range of depths. The local trout rivers have been well-stocked and are producing on bait, rooster tails, and small jigs. Most of the local hotspots have been producing, with solid reports from the Saugatuck, Mill, and Rippowam Rivers. Reports from the Saugatuck Reservoir have been steady for calico, yellow perch, and smallmouth.

This spring has been a series of ups and downs, including temperatures rising and falling, river flow rising and falling, and the fishing seemingly doing the same. Luckily, anglers have found a bit more consistency with the fishing this week, as a small rise in water temperatures has resulted in some better saltwater action. Rhode Island anglers could take advantage of a better cod bite whenever the weather allows, along with some better tautog action closer to home. A few fresh striped bass have shown up out front, and there are plenty of holdovers to play with in the rivers as we wait for some larger waves of fresh fish. Freshwater action has been strong across Rhode Island and Connecticut, with consistent trout stockings resulting in consistent action, along with strong bass and pike action.