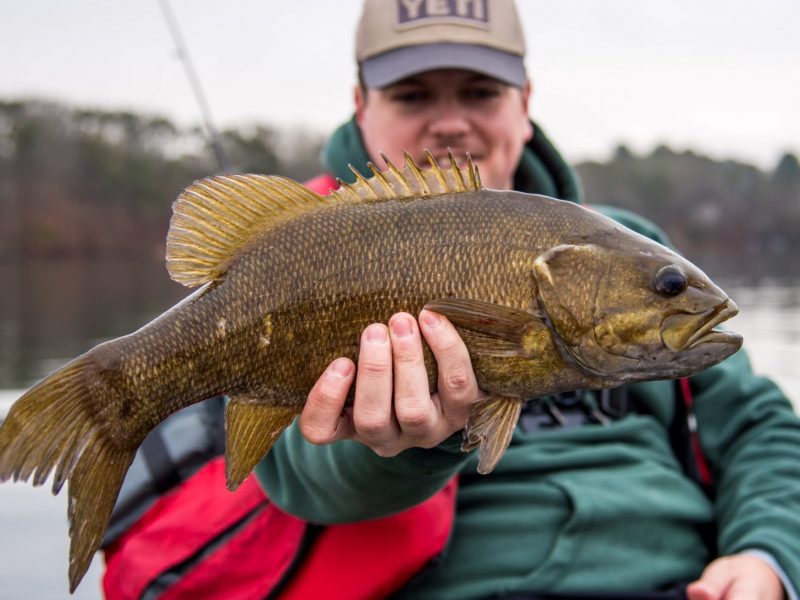 This morning was full of sunshine and temperatures in the high 30’s, my favorite type of winter fishing. It would have been a great morning for trout had I not exhausted myself fishing through cold rain and wind several times on Wednesday (with no success I should add). I did manage a single rainbow trout in the morning, my first since mid-December. My past few weeks have been more bass-focused, with the patchy warm weather and sunshine bringing them out of deep water and cover for often brief, but exciting feeding windows. I was even able to get into a nice smallmouth bite by kayak with OTW Editor Jimmy Fee.

It was a single quality fish to close out 2021, but for Jimmy, it was all about quantity. He reeled up a few smaller ones here and there. When two bass boats arrived in our area and started hooking fish consistently, we realized we were in the right spot. Without a fish finder, we had been left to blindly fishing humps and ledges using only GPS and contour maps; so there was comfort in seeing other fisherman catch nearby. Jimmy hooked into several more smallmouth before the wind picked up and the brief, exciting winter feeding window closed.


But kayak fishing deep water isn’t the only option. Since moving to Cape Cod, I have been yearning to catch a big chain pickerel. Due to their aggressive nature, catching one is not something that myself, or most anglers (generally) struggle with most of the time- yet there I was. Pickereless.

Finally, I found the right time and right place where the big chains were chewing. I fished with a small Vudu Mullet; a swimbait that is typically used in saltwater. I quickly caught a couple bass with eyes bigger than their stomachs. But, as the sun fell behind the trees, I threw a few more casts and connected to a 25-inch chain pickerel which weighed 3 pounds and 5 ounces. Half hoping it was a trophy largemouth, I fought the fish with extra caution. It gave a couple quick runs where it pulled some drag, before it changed paths and swam directly at me. When I finally got the fish in sight, it was the most ecstatic I had ever been to catch a chain pickerel.

Freshwater bass and chain pickerel are not the only fish around to keep anglers entertained. Reports of quality brown trout and of course, rainbows, continue into the New Year.

East of Falmouth, shellfishing has also been great recently. Amy from Sports Port Bait and Tackle in Hyannis, reported that the Barnstable Oyster Program has been feeding plenty of locals, providing another reason for residents to bundle up and get outdoors.

Amy also reported that holdover rainbows and brown trout have been in the mix. One angler that came into her store had recently caught a 20-inch brown trout using a gold spoon, and others reported holdover rainbows biting on the same thing. It would appear the warmer days with lots of sun bring the bigger fish out of their winter dwellings, while the newer stockies are biting more consistently.

In the opposite direction, anglers around Buzzard’s Bay have their fair share of freshwater fishing options. Tom at Red Top Sporting Goods in Buzzards Bay, reported that Great Herring Pond has been a productive option for boat fishermen and kayak anglers when targeting smallmouth bass. Most success will come fishing Ned Rigs and drop shot rigs very slowly along the bottom.

As for trout, Tom reported that Big Sandy Pond has seen plenty of rainbows and even a brook trout here and there. Brook trout will often hit Rapala’s- it’s happened to me several times when cold water bass fishing. It’s helpful for both you and the fish, to switch out the treble hooks if you plan on releasing them. Fly fishing the trout ponds has also been a productive trout tactic, particularly for anglers fishing the early morning.

Tom at Red Top also reported that rainbow trout have been biting on shiners, which is great news for multi-species anglers. If you have shiners, save a few for some bass fishing. Dean’s Pond continues to produce steady largemouth bass on shiners.

As a winter storm approaches, largemouth bass could be feeding aggressively. Otherwise, a patient effort, experimentation and warm layers are going to be the key factors in catching fish this time of year. Live bait is a safe go-to for increasing the chance of a hook-up. But if you’re like me, I mostly fish with artificial lures because I enjoy the art of deception. Whatever your preferred method may be, the freshwater bite will stay active in early 2022 so long as we avoid skim ice.