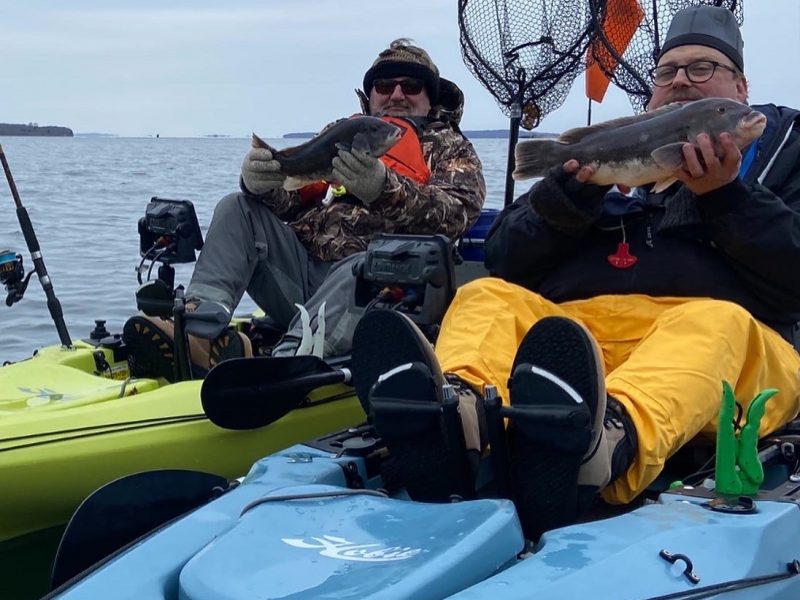 The Frances Fleet in Narragansett has still had to dodge the weather a bit, but they are still finding some quality fishing when they have been able to get out on the grounds. Captain Rich has had some solid action on the sea bass grounds out by the ledge. The cod fishing has been a bit on the slower side out there, but full boat limits of big sea bass have been easy to obtain. Most of the focus this week has been on the tautog, and the tog grounds have also been fruitful for Captain Greg, with near boat limits on most trips and some nice fish to 8-pounds or so when they have been able to get out there. They will continue to sail whenever the weather allows, so be sure to check the website for updates and reservations.

Dave, at Ocean State Tackle in Providence, is officially closed until the spring, but he is available by appointment for certain items. He told me that word from the local fishermen was that the tautog fishing remains very good across the state, while the squid have continued to show a nice late season push around Newport, Jamestown, and Sakonnet Point.

Connor, from Tall Tailz Charters in Newport told me that the tautog fishing has remained great as we approach the end of the season. Water temperatures are starting to drop, but there are still plenty of quality fish around. He is still getting easy limits of fish to 12-pounds, along with a few cod on each trip as bycatch. There have also been some nice schools of squid starting to make a late season run, so there is plenty of quality fishing still going on in Rhode Island. The fishing should remain strong right up to the close of the season in late December and Connor still has some dates available, so be sure to book a trip before it’s too late!

Nick, at Big Bear Hunting and Fishing told me that saltwater anglers are reporting great results for late-November. Freshwater anglers are reporting some big largemouth, especially for those that are switching to live shiners as the water temperatures continue to drop. There are also some big bass that are active enough to hit large artificials around dawn and dusk. Trout anglers are also seeing no lack action with the best catches coming from Silver Spring and Carbuncle. The shop will be getting stocked up for ice fishing soon, and hopefully we have some ice to walk on this year.

Dustin, at RI Kayak Fishing Adventures reports that the tautog action has slowed a bit but it has remained rather consistent for December. Most of his clients being able to manage multiple keepers, along with plenty of shorts. The squid fishing has improved quite a bit as well. Most squid anglers who have dedicated a bit of time have managed at least a half-full bucket. On the freshwater side, there is still some great largemouth action, along withs some improved crappie and trout action on ultralight setups. Dustin is fully outfitted with dry suits for his clients on these colder days and has extended his holiday sale to the end of the year. A gift certificate for a 2022 trip will make a great gift for the angler in your family!

Heather, from Blackhawk Sport Fishing reports that they have continued to lose quite a few days due to the wind, but when they have got out, the fishing has been fantastic. They have continued to find loads of sea bass, plenty of tog, and a few cod in the mix on their combo trips. Unfortunately, the tautog season has closed in Connecticut, but they are already looking forward to the spring season. They will continue to fish for sea bass and cod whenever the weather allows, so be sure to check their Facebook page or website for updates and reservations!

The guys at Hillyers in Waterford said that the school striped bass fishing is the best show in town until it truly gets too cold to get out there. The right days, specifically when some warm sun is beating down on the water, have seen some great school bass fishing at the Millstone discharge, and up in the Niantic River. Anglers are reporting good trout results at Latimer’s Brook on small soft plastics like trout magnets, or flies with some good old garden hackle. The shop will be closed during the winter months, but they will be back sometime in late March.

Mike Roy of Reel Cast Charters has been spent most of his time cleaning up the boat and his gear from this year’s saltwater season but mentioned there are still plenty of school to slot class bass outside of the river in the Sound. As the water temps continue to drop, these fish are eager to move back into the river and make their way to their winter holdover locations. The surface temps are warm enough to keep these bass active at the moment, and they are eager to hit soft plastics for spin anglers and Clousers on a sinking line for the fly anglers. If you’re looking to book one last trip, be sure to contact Mike asap!

Max, at Fisherman’s World in Norwalk, reports that the striped bass action has remained steady for anglers fishing out front, and for those starting to transition to the Housatonic. School bass action has been steady along the beaches, while some bigger bass and bluefish are still turning up in the sound around 11B and 28C. The lower Housatonic has seen a nice first wave of striped bass action as well, especially over the past few days, as the temperature has dropped. The temperatures haven’t dropped enough to stop those river bass from crushing a topwater offering, but slowly worked soft plastics on jigs are starting to prevail. Word is that the herring has started to show up a bit in the local harbors, if true, the herring run is looking a bit more promising than last year. Trout anglers are turning to the Mianus, Mill and Saugatuck Rivers for trout action, while anglers fishing the Saugatuck Reservoir are reporting good results. This is primetime for the reservoir anglers, with good action for bass, walleye, and trout.

We’re entering that in-between period across New England where saltwater fishing is winding down for most anglers, while ice fishing enthusiasts start to dust off their gear and hope for a quick freeze. While this may seem like a slow period of fishing, there are still ample, excellent opportunities. Saltwater anglers in Rhode Island still have time to fill the freezer with tautog filets, as that bite shows no sign of quitting. Don’t be surprised to find some bonus cod in the mix and we should start seeing a more consistent cod bite materialize over the coming weeks. School-striped bass can still be found out front, as well as throughout the salt ponds and tidal rivers across CT and RI. Freshwater opportunities are abundant as well, with trout, bass, walleye, and pike starting to get their pre-winter chew on.