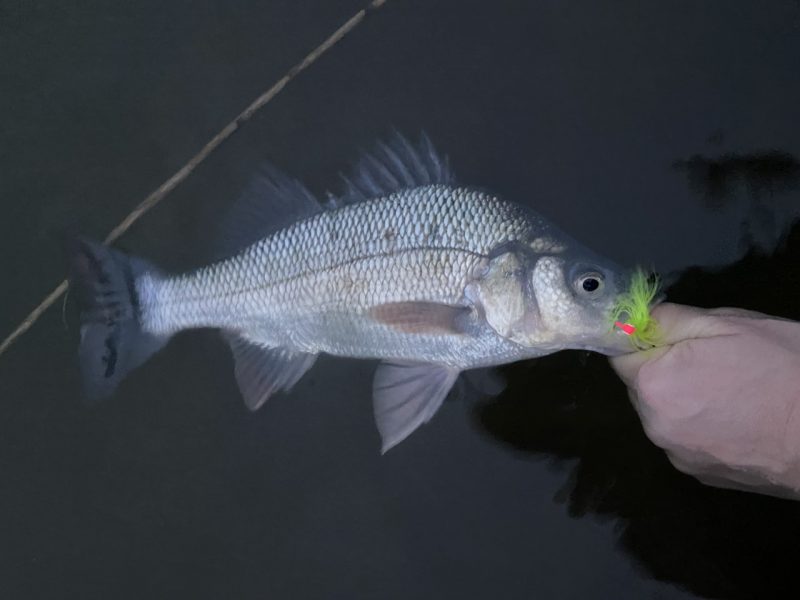 Prespawn white perch are on the feed.

Our remaining offshore wreck trips will take place from December 26-31. The end of black sea bass season is approaching fast! Trips depart the night prior. The fishing lately has been awesome, with catches consisting of jumbo sea bass, big porgies, cod, pollock and hake.

They’re running a New Years Eve seal watching trip; book with them at their website: www.captloufleet.com.

Point Lookout’s Superhawk has been catching loads of giant sea bass, jumbo porgies, weakfish, plus cod, pollock, triggerfish and more. Tomorrow is the last sea bass trip of the season, so make sure you reserve your spot if you want in!

After the New Year, we plan on fishing offshore for jumbo porgies, cod, pollock, ling and more. Trips are $160.

The fleet will be sailing plenty after the new year, weather permitting. The primary focus after NYE will be larger cod and pollock.

Locals are getting in on the stocker trout action available throughout the island.

The shop is fully stocked with a variety of Van Staal reels and pliers. Furthermore, for every $50 you spend at Cow Harbor, you will receive one raffle ticket for our $500 custom rod raffle, to be given away on April 1, 2022.

Since Christmas, the sea bass fishing has been on fire. We’ve been culling easy boat limits of giant sea bass to over 6 pounds. Double headers are typical; there are literally fish flying all over the place at times. Hold on to your hat!

Along with the incredible fishing came incredible sights. Captain James describes Tuesday’s experience as the most incredible he’s ever had on the water: an all-white, albino humpback whale breached just off our starboard side, and then came up for air once before disappearing. What a treat! There have been a variety of whales out there, and we’ve experienced some awesome shows on the trips back to port.

The Shinnecock Star in Hampton Bays is running offshore this Friday for their final trip of the season. They’ll be targeting the wrecks for the usual suspects. Our next trip after this one will be on May 1 for Peconic porgies.

Tuesday’s Block Island trip was our only outing of the week. Captain Dave had a fine day of fishing aboard the Viking Starship. There were plenty of bites, action and fun. We had the typical mixed bag of giant porgies, sea bass, cod and other species. Most anglers were able to cull a limit of big sea bass and mix up the bag with other species.

Look for their schedule and book online at vikingfleet.com.

As we progress towards the New Year, the fishing options are becoming fewer. Many species which once swam comfortably in our warm coastal waters have sailed south. Some of them just moved offshore a bit, like the sea bass, porgies and weakfish. It’s incredible to me that these species are still even biting in the extreme cold. It’s business as usual though, and rather than lament the lack of options for the shorebound, it’s sensible to step out of one’s comfort zone and learn to fish the local cold water.

Although many species have turned off, there are some species which are just beginning to turn on! The holdover striped bass which are used to feeding in the cold are acting ravenous these days. I had 20 fish in a tide the other evening. None were larger than 21 inches, but the action was incredible on my new ultralight rod, a Fenwick Eagle. I’ve just respooled my Shimano Nasci 1000 with 4 pound line. I’d been using 2-pound, but that is just pathetically weak. If you get any fish over 15 inches, you can hardly use the rod to fight the fish to your hand. If your drag is the slightest bit too tight and the fish makes a jerky move, it’s going to break you off. Once I went from 2 to 4 pound line, my confidence had regrown and I was able to put the brakes on some riled up stripers.

The stripers are mainly just bycatch; I am targeting perch exclusively. I’m never unhappy to catch a striper on the side, but I’d much rather have a gluttonous white perch at my feet. Some of the spots I fish are holding some seriously fat perch right now. One spot has obvious pre-spawn fish, which is the holy grail of perch fishing. Unfortunately, they haven’t been stacked too thick there. Typically the white perch “pre-spawn” implies a massive population of massive fish, schooled up in a small area, eating anything that even remotely resembles food. The best fishing I’ve ever experienced was a perch pre-spawn in a raging nor’easter. I’m always expecting a storm to get a certain population going insane, and the potential for a true trophy (3+ pounds) looms large.

Quick tip for fishing the harshest winter days: fish fluorocarbon, and get a decent quality reel. A $20 piece of crud from Kmart isn’t going to cut it, and neither is braid. The main problem with a cheap reel is that there’s cheap grease inside, which will literally freeze on a cold day, preventing you from being able to turn the reel. The reason I recommend fluorocarbon is that it doesn’t absorb water the same way braid does. Braid gets wet and stays wet; on a freezing day, the braid is going to freeze to itself on the spool, and you won’t be able to cast unless you’re tossing heavy weights. This happened to me during the aforementioned “best bite ever.” So, if you want to go hard on the perch or bass this winter, get yourself a decent reel and spool it with some 4 pound fluorocarbon. Thank me later.

I’ve heard good things about Esox and Sander (pickerel and walleye, respectively) this past month. These large toothy predators are on the hunt right now. Pickerel will remain voracious throughout the winter, more willing to hit bait. Look for the walleye at night. I’ve done best with suspending jerkbaits, but jigs and flies (like clousers) will certainly pick ‘eyes off the bottom. The pickerel are best targeted with something slow-sinking or suspending as well.

My personal favorite method to target them (and most other winter species) is the jig under a bobber. It’s usually some sort of marabou jig or wooly bugger hanging under a cork bobber that I make. The method is simple: fan cast to different sections of water; when it lands, let it sit and wait for the hit. Usually, the jig hitting the water is enough to draw the attention of a nearby critter. With the bobber, you can let that presentation remain in the same exact spot for a while, without worrying about snagging bottom or picking up weeds/leaves. The longer a jig can stay still in the winter, the more likely you are to get hit. If I don’t get a hit for a while, I give a swift pull of the rod to pop my bobber, creating a large ripple that spreads wide throughout the area. I see this “shockwave” going out as if it’s a dinner bell being rang. I find that fish will come to investigate the ripple, see the jig hanging there and start paying attention to it. Next, wait a few seconds and then begin to elicit very short, slight pulls on the rod, which causes the bobber to create tiny ripples. The fish’s eyes are honed in on the suspending jig. Those little tugs are causing the marabou hair on my jig to dance ever so slightly, like it’s doing a little hula dancing. Once I stop those brief heartbeat-paced tugs, the bobber will often go flying underneath the surface.

Hopefully that wasn’t too verbose, and you can imagine exactly how I’m fishing. Practice this tactic and you should see excellent fishing through the winter.

Considering the temperate winter we’ve had so far, I expect winter fishing to be more productive for the near future than I’ve ever experienced. So far, this has been the case for 2021. Moving forward, barring one of these more prevalent “bomb cyclones” that cause a deep freeze in our region, I think the fishing should remain steady and productive. I know there are bunker around still. I was watching some adult bunker swim in a Suffolk County tidal creek the other day. Should the water freeze all of a sudden, we can probably expect a big fish kill. Thankfully, the plague which seemed to haunt the menhaden population last winter, known as Vibriosis, hasn’t been much of a factor this year. We’ll see how that plays out.

Hit me up on instagram if you have any questions about winter fishing (@SouthForkSalt). I’m always happy to help. And if you’re starting to get some cabin fever, have a gander at the recent video I put up on youtube. It’s some pretty awesome drone footage of false albacore running and gunning, blitzing upon fish at extremely high speeds: https://youtu.be/ESlUN9RRCcA.