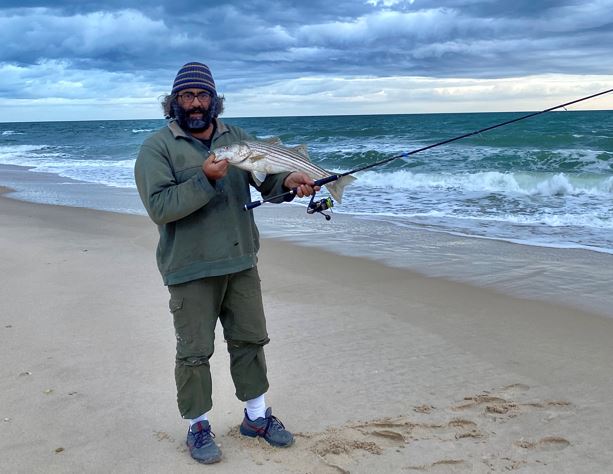 Above: Nico with a surf striper caught on the last day of the striper season.

Big weakfish at the wrecks, in good numbers.

Some big white perch are on the hunt. Low light is your best bet.

Trout action might be the best potential fishing for the shorebound.

I heard lots of reports of small stripers being poached last week. Large numbers of illegal fish were being taken. If you witness anything like that, please call it in. Here is the 24 hour DEC poaching hotline: 1-844-332-3267.

You can also report poaching online at: www.dec.ny.gov/regulations/67751.html

Do not be discouraged if the authorities don’t show up. Keep reporting. Thanks for your help in supporting the fishery.

The last day of striper season was a banger, with over 40 keeper bass brought to hand (and mostly released). Thanks for booking with us this season! We’ll resume on 4/1/22. The “Rockfish” is undergoing a complete overhaul during the winter, so keep your eyes out for picture updates on our social media.

John McMurray of “One More Cast Charters” in Oceanside caught big bluefin consistently right up through the past couple days. It keeps feeling like the run should be over, but we keep getting good weather windows to run offshore, and the fish have been there biting!

The offshore fishing is ridiculous these days, with huge quantities of fish and a decent variety as well. The highlight is probably the numerous large weakfish that have been coming over the rail. Everyone on board has been going home with a good amount of fillets.

Point Lookout’s Superhawk had an awesome week of fishing, and will be sailing primarily for sea bass whenever the weather cooperates. The season closes 12/31, so book today before you miss out. We’ve been pulling up some large porgies on the reg as well. Cod, big weakfish, pollock and more have have made for awesome mixed bags.

Their December schedule is posted on their Facebook page. Call today to make a reservation: 516-607-3004.

Fly-fishing for trout is the primary potential for north shore anglers these days. Make sure you look up the rules for your local waterbody. Nissequogue, Connetquot and Carman’s River all have different rules. Also, some ponds/creeks have certain rules regarding angling and wading, such as “fly fishing only” or “closed for protecting native brook trout.” Research the waterbody you want to fish before going there. The NYS DEC hosts all pertinent info.

Tuesday’s trip to Block Island was excellent. There were plenty of porgies and sea bass, plus a handful of cod and pollock. Every drop produced good fish, making for some of the best late season fishing we’ve experienced in a long time. Gang Chen from Queens took the pool with a 2.8-pound porgy.

On Friday, the porgies were biting well, and they were large. The sea bass were harder to find, but everyone managed a few. Igor Panjkovic from Brooklyn took the pool with a 3.2 pound-scup. Mike Mendoros caught a 6-pound pollock to win the edible pool.

Effort seems to be slowing down, as the reports section isn’t nearly as saturated as it was two weeks ago. Nevertheless, some guys got out and spent the time writing these reports:

Nate Bowditch fished last Thursday afternoon around the top of the tide. He worked a steep ledge in heavy current in the far western Sound. There were birds working peanut bunker, and schoolies underneath them. Nate pulled a couple rats on a spook before buck tailing. 1.5 ounces brought him to the bottom, where two 24-inch bass were waiting to eat. Finally, as the sun went down, two slots took his rubber shad in bunker pattern.

Rob fished the next night after sunset in a western north shore back bay. Around the top of the tide, he picked a handful of short bass on soft plastics. Once the current picked up, some larger schoolies ate his black mag darter and mucho minnow. He got a good thump on a blurple little neck popper, but no hookup.

As the new year approaches, don’t miss the last licks for blackfish and black sea bass. Tog season has closed in the LI Sound; the NY Bight (anywhere outside LI Sound) is open until December 22. The final day of black sea bass season is New Year’s Eve. The sea bass bite has been outstanding this year, and it hasn’t let up for those willing to travel offshore. There aren’t many boats making that trip, but the ones venturing out to the wrecks and reefs have been finding knuckleheads in excess of 6 pounds pretty regularly. I expect that trend to continue this week. These surprisingly mild temperatures should sustain throughout the week.

There are still stripers kicking around in the surf if you want to do some catch and release, but now’s the time to go after coldwater fish like white perch and trout. Small marabou jigs have been getting it done for me on the perch front. I’ve had some decent fish so far, but no crazy bites with 40 fish, or anything like that. For tough bites, try everything. Use other color jigs, tins, add a teaser, try different types of bait. Now’s a good time to hone in on the bite and master your methods, before they become pre-spawn giants and you lose the fish of a lifetime.

I’ve yet to target any trout this winter, but I’m told nymphing has been the best play as of late. Personally, I like to hang a tiny nymph underneath a float/bobber, and dead drift that through a pool. That usually gets me good numbers of fish, and is seldom refused outright. If the nymphing isn’t doing it for me, I will tie on streamers and target the slower water on the outskirts of the main current. I’m looking for pockets protruding into the bank at a river’s bend, or I’m tossing it past the edge of a cornered bank. I love to swing streamers as the take is usually insane. There’s lots of ways to experiment too, like mending up or downstream for a faster/slower swing; also, starting your fly from different positions, and swinging along different angles. It’s great fun.

It’s a great time to get out and do some hiking/birding as well. There’s a bunch of different owls you can look for, like the popular snowy owl. People are seeing lots of snowy owls so far this year, and in places they’re not known to frequent, like the Montauk bluffs.