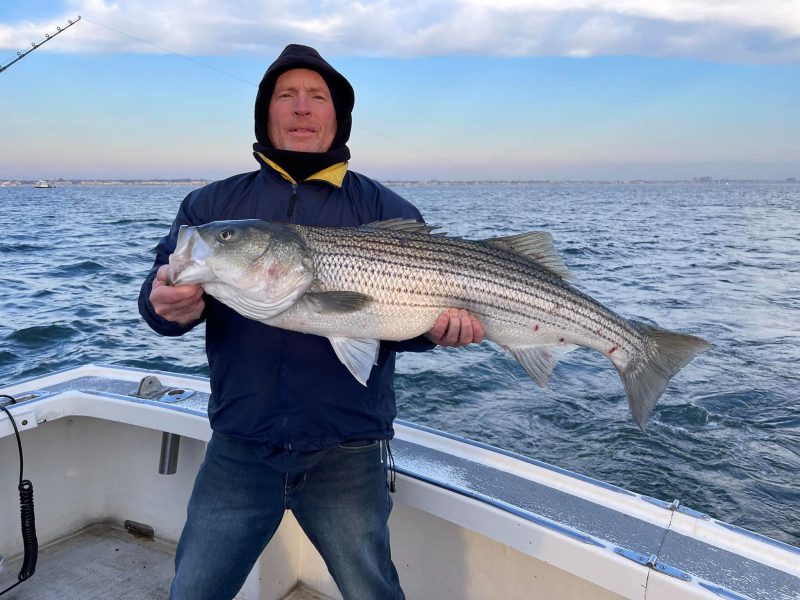 Above: One of the many stripers caught this week aboard Parker Pete’s Sportfishing out of Belmar.

Anglers have just about run out of superlatives to describe the current striped bass bite.

Epic, insane, and historic are just a few being heard lately. Enormous amounts of bunker are fueling the action.

Boaters continue to get the best of it, but the bass are starting to show on the beaches in certain spots.

For those not afflicted with striper fever, blackfish, sea bass and porgies continue to bite, although you have to travel for the sea bass. A quick reminder, the blackfish limit goes from one fish to five on Tuesday, Nov. 16.

Rick Hebert at Tackle World in Rochelle Park said the bass are everywhere and it’s been very good fishing.  This week saw more keepers mixed in with the jumbos. The fish stretch from from Raritan Bay down to Island Beach State Park.

Reports on sea bass, blackfish and freshwater species were a little sparse this week, he said, because everyone was striper fishing. Hebert did mention that store employee Paul Newman broke the Rhode Island state record for tog with a 21.6-pounder.

Capt. Phil Sciortino Jr. at the Tackle Box in Hazlet said the bass fishing is just nuts. The Raritan Reach around Buoy 19 was loaded with bass on Tuesday, he reported, but they have been everywhere for the last week.

Mojos, flutter spoons, shads and live bunker have all been catching fish.

He also reported boats fishing the ocean for stripers have been running into schools of false albacore. Not bad for November.

Mel Martens at Giglio’s Bait and Tackle in Sea Bright said that while the boats have been doing well, it’s been quiet for the surf fishermen.

While he waits for the sand eels to show up in the surf, Martens has been fishing the Shrewsbury and Navesink rivers with plenty of bass to be had. The stripers are feeding on all the smaller bait that’s still back there.

Mike Gleason at Tak Waterman in Long Branch said Raritan Bay is still lit up and the fishing is very good everywhere else. Pretty much everything – flutter spoons, Doc Spooks, shads, livelining and trolling – is working. The fish are between 20 inches to 50 pounds.

There have been fish on the local beaches, he said, with an hours-long blitz last week on peanut bunker.

He also reported good fishing back in the rivers and had received a report about a 40-inch bass caught.  He, too, had heard of false albacore popping up in the ocean.

Bob Matthews at Fisherman’s Den in Belmar said the big bass run is on with most of the boats out of the marina targeting them.  The Big Mohawk has been doing very well on most trips with shads and live bunker.

Charter boats are trolling bunker spoons, shad rigs and Mojos and catching bass from shorts to keepers to jumbos that have to go back.

Matthews said there are some hot spots in the surf, mainly down in Ocean County but a few beaches in Monmouth County are giving up fish. Night fishing has been productive on SP Minnows, metal-lip swimmers and bombers.

The blackfishing has been excellent in the Point Pleasant Canal, he added, and the Shark River has seen an increase in the number of winter flounder caught.

Capt. Pete Sykes of Parker Pete’s Sportfishing out of Belmar said the striper fishing has been excellent.  Some days require a little more searching or a change in tactics. One day trolling is the ticket while the next only shads or live bunker will get the fish to bite.

Capt. Sykes has room available on striped bass extravaganzas scheduled for Monday and Tuesday of next week.

Capt. Jay Richardella of Side Job Charters out of Belmar has been doing very well with the stripers mixing in a number of keepers with the jumbo fish that have to go back. He has a few striper openings available and can be contacted through his website.

Capt. Steve Spinelli on the Skylarker out of Belmar has been getting into the bass as well but took a break from the bass to run a wreck trip on Tuesday. It was a bumpy ride, but he reported they had a boat limit of sea bass, a bunch of porgies and some bluefish.

John Vafiadis at the Reel Seat in Brielle said everyone has been getting in on the striper fishing calling it pretty damn consistent. The boat guys are getting fish in the 40-pound range jigging shads, livelining and trolling.

The beach bite got better this week, especially at night, he said, with metal-lipped swimmers doing the job.

He also mentioned the November albies, saying that Eric Bunz from the shop picked one up when he was out striper fishing earlier this week. Bunz also picked up a few big bass.

The blackfishing improved at the Manasquan Inlet, Vafiadis said, and it’s really good in the Point Pleasant Canal. The shop has green crabs.

Finally, for those ready to make the trip, the offshore bite for yellowfin and longfin has been good in the canyons. The Reel Seat also has a new shipment of clothing in the shop.

Kyle Tanger at Fishermen’s Supply in Point Pleasant Beach said the stripers are “here, there and everywhere,” reporting the bite was off Belmar on Wednesday, down south earlier in the week and several places in between. He’s been selling a lot of 2-ounce jig heads and 6- and 7-inch shad bodies to the boaters.

He said the heavy surf kept a lot of guys off the beach earlier this week but he did pretty good rolling a bucktail in the suds, catching nine stripers. The Manasquan River continues to give up bass on eels and shads at night.

The blackfishing in the Point Pleasant Canal, he said, is drop-and-reel fishing. The tide doesn’t matter except 4- to 6-ounce sinkers are needed when it’s running and ¾-ounce jigs at slack tide. Green crabs will do the trick.

Capt. Kenny Namowitz on the Mimi VI out of Point Pleasant Beach has been getting in on the striper action with more keepers coming aboard this week along with fish too big to take home.

He’s got an open boat striper trip scheduled for Monday with spots available.

Frank Giacalone at Gabriel Tackle Co. in Brick said the local beaches are producing bass from Brick down to IBSP. Bunker chunks, shads and SP Minnows were doing the trick.

He, too, mentioned the excellent blackfishing in the Point Pleasant Canal with plenty of keepers being caught.

Pete Kupper at Charlies’ Bait and Tackle in Normandy Beach said the striper fishing has been pretty good there with metal-lipped swimmers and bunker chunks catching some big fish. He said folks were having trouble getting a fish under 38 inches.

Sign-ups continue for the shop’s Surf Turkey Tournament over the Thanksgiving Weekend and Kupper said they are working with the Berkeley Striper Club’s Catch and Release tournament over the same weekend so fish can be entered in both. Check with Charlie’s for details.

Scott at Grumpy’s Bait and Tackle in Seaside Park said bunker chunks, especially heads, and plugs with big profiles, like metal-lipped swimmers, were working very well off the local beaches.

He personally had a good day earlier this week, launching his kayak off the beach and catching 10 bass, all in the 40-pound range, on a Ben Parker flutter spoon.

The blackfishing has been okay at the Barnegat Inlet jetties and on the local wrecks and reefs, but it’s really good in the Point Pleasant Canal, he added.

Who knows how long this striper bite will last so it’s best to strike while the iron is hot. Private, party and charter boats are having a lot of success with the big bass and now there are more keepers in the mix.