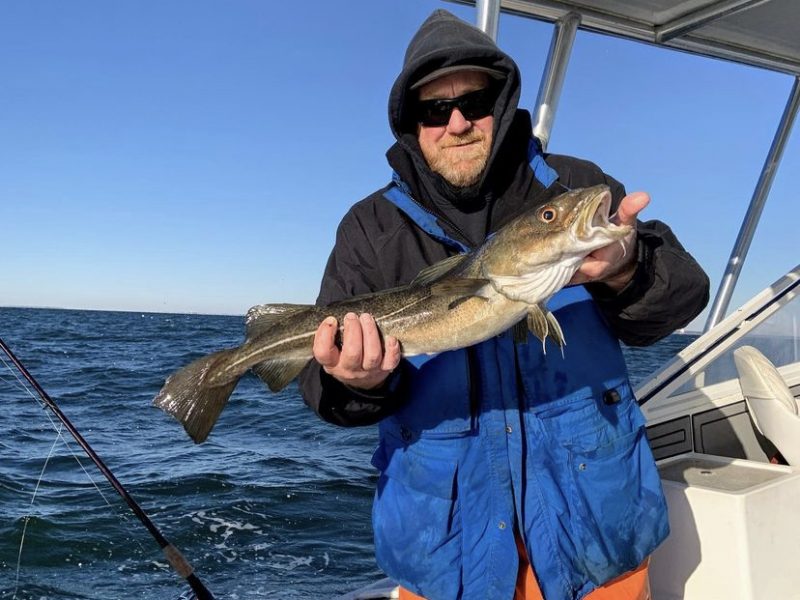 Above: Codfish surprise. This cod was caught inside Buzzards Bay, mixed in with a pile of keeper blackfish.

The bass haven’t gone anywhere after that nor’easter. There are plenty of schoolies being caught on the beaches, in the bays, and there are some slot-size and larger fish coming from the islands and the Canal. Don’t hang up the saltwater gear yet.

There are still albies kicking around as well, reported Evan from Eastman’s Sport and Tackle, who said he’d heard from tog fishermen on Thursday morning who’d spotted the distinct slashes of feeding false albacore.

Evan also said that fishermen taking eels down the Elizabeth Islands were having good luck with stripers in the slot, and over the slot, this week. More slot-size stripers were reported by AJ at Red Top Sporting Goods, who said the Canal was producing good topwater action this week.

Pencil Poppers and Magic Swimmers were working well, AJ said. Anglers were having such good luck with those, that few resorted to using jigs. Though bouncing bottom could be the ticket to tempting a late-season cow that’s sneaking through the Canal.

It’s definitely not too late to hook a big bass. A few years back, a 47-pounder was caught in the Canal during the first week of November.

Schoolies are far more abundant right now, however. The salt ponds on the South Side and the harbors on the Buzzards Bay side are full of small bass.   Soft plastics and small swimmers will work well right now, as will flies. Handle these fish with care, and consider swapping trebles for singles to help these fish survive catch and release.

Tog fishing is excellent right now, both in Buzzards Bay and along the Elizabeth Islands. Anglers are having little trouble securing a limit of just-legal fish, but finding large tog, one in excess of 8 pounds, has been challenging.

Mixed in with the tog have been a few surprises, including a codfish, caught aboard Anthony DeiCicchi’s boat on Wednesday morning. Anthony was fishing inside Buzzards Bay when the 7-pound cod hit a green crab.

Freshwater fishing has been excellent. On mild mornings, bugs are hatching on the trout ponds, and rising trout are all over the surface. Largemouth bass and pickerel are biting well, and smallies are still hanging shallow, not yet posting up on deep, offshore structure for the winter.

It’s prime time for tog, but don’t go out without a rod rigged for stripers or albies. Scale down your tackle for schoolies, but don’t give up hope for one last big one.

But, you’d be justified in hanging up the saltwater gear and switching over to freshwater, as the fall freshwater fishing is at its peak right now, with the mix of trout, bass, and pickerel all feeding heavily in the Cape’s ponds.