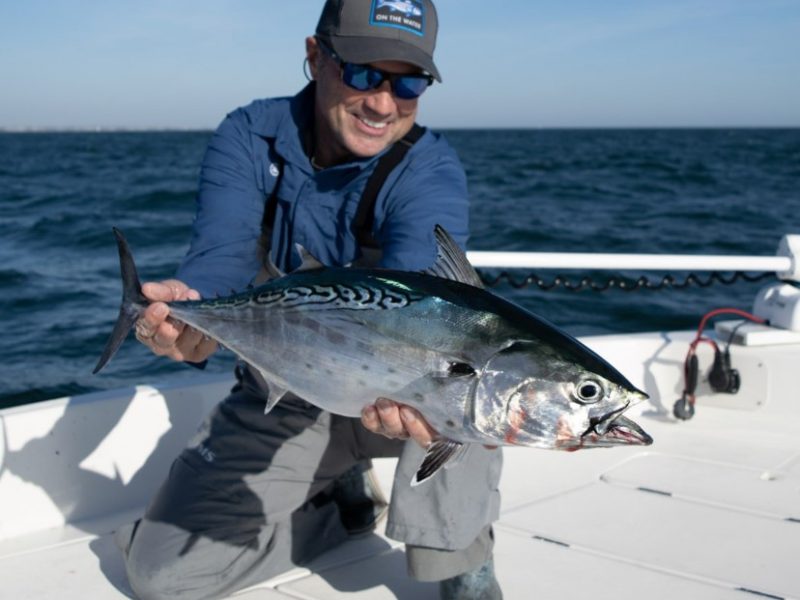 Above: Chris Megan with an albie caught late last week. The albies made a strong showing before the winds kicked up on Monday.

As of Thursday morning, many Cape residents, and the OTW Office, were waiting for power to be restored. The late-October nor’easter packed a serious punch, and what will likely be the death blow to the 2021 albie season.

Up to late last week, fishermen were reporting great false albacore fishing off the South Side of the Cape from Falmouth to Harwich. Anglers were still reporting catching as many as 10 to 12 albies per outing. Even before this storm, OTW’s Kevin Blinkoff, who’d been chasing the albies four to five days a week since September, say a drop off in the albie numbers by Sunday.

Still, I wouldn’t head out tog fishing without an albie rod rigged and within easy reach.

Tog fishing should be in its prime right now. Getting bait could be a challenge with the rough weather preventing boats from getting out to trap green crabs, so it’d be wise to call ahead to the shops to see who has them in stock. As the seas calm, the tog over the rocky structures in Buzzards Bay and along the Elizabeth Islands will be feeding heavily.

The bluefin tuna fishing east of the Cape continued through last weekend, with trolling and casting anglers catching 40- to 50-inch school-size tuna. Traditionally, tuna hang around the Cape into November, but we’ll need to wait for calmer seas for confirmation.

Striped bass will definitely be here after the storm calms down. Nine years ago, when Hurricane Sandy grazed the Cape, the following weeks brought some exceptional fishing to the Canal as the fierce winds blew in schools of sea herring.  That’s not out of the question. There will definitely be plenty of schoolies around, both on the beaches and in the backwaters. Larger bass will be fewer and farther between, but they will be here. Find good concentrations of baitfish, especially larger baitfish, and you’ll improve your odds of finding a late-season cow.

And if you, like me, have been neglecting the Cape’s freshwater venues since about, well, when the stripers came back, then now is a good time to get back to them. The fall trout stocking supplemented the already healthy population of holdover trout in places like Cliff, Peters, Sheeps, and Mashpee-Wakeby, and falling water temperatures have put those trout on the feed. Especially the bigger brown trout.

Largemouth and smallmouth fishing is also good. The water is cool enough for them to be very active and hungry, but not so cold that you need to use super-slow presentations in order to get bites.  Lipless crank baits are very effective right now, as are soft-plastic swimbaits and jigs.

Boat fishing appears to be off the table through next week, as north and east winds continue to blow. Finding areas protected from the wind and waves will be the best bets for action. This leaves the Canal, and the harbors and bays, all of which should have schoolie stripers in them, and the freshwater ponds which are full of hungry trout, pickerel, perch, and bass.