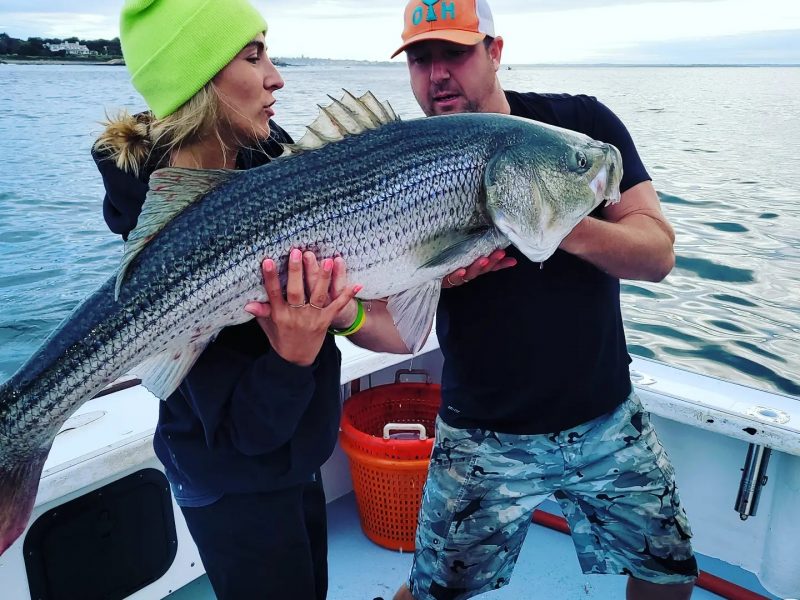 The captains over at The Frances Fleet in Point Judith, haven’t been able to get the last few days due to the weather, but they all reported a strong showing last weekend and into the early parts of this week. Captain George has been in charge of the sea bass charters, and while the sizes may have gone down a bit, everyone on board has been leaving with a full limit and a nice bag of scup.  Captain Frank has also been pounding the bottom and has worked the deeper water in hopes of some cod. The bite has been consistent for all species, but when they’ve found some nice drift conditions, they have found some epic action. Some of the best sea bass fishing he has seen, with limits of 3-5-pound fish, along with a nice bag of market-sized cod has been commonplace. The trips to Coxes have been fruitful as well, as the scup have started to thin out and the bigger cod and sea bass have moved right in. They will continue to sail daily when the weather allows, and they still have some dates left for the charter season, so be sure to contact the office for reservations.

Dave, at Ocean State Tackle in Providence, told me that the usual fall patterns continue to hold true, and things have started to accelerate as the weather has become more fall-like. The false albacore and bonito bite has improved quite a bit, with a nice push of both species showing up along the South County beaches this week. There is still quite a bit of inconsistency from day to day, but the bite has been better than it has for most of the season. The yearly push of striped bass into local waters, with bass of mixed sizes being taken on peanut bunker imitators up in the Providence and Seekonk rivers, and throughout the bay. Most local bass anglers are also reporting a more consistent bass bite around the South County beaches and breachways as well. The excellent bottom fishing has also remained consistent. Scup and black sea bass limits have remained easy to obtain, while tautog fishing has continued to improve by the day. Freshwater anglers are also excited about the cooler temperatures, and equally as excited about the fall trout stockings that RI DEM has scheduled for the upcoming week!

Nick, at Big Bear Hunting and Fishing, reported an upswing in false albacore action along the South County beaches this week. Most anglers are heading out in search of hardtails but are prepared to pound the bottom if they don’t show up. The sea bass bite has remained consistent, while the tautog fishing has really started to ramp up. There are also plenty of striped bass in the usual haunts, so even if the hardtails don’t cooperate, you shouldn’t have an issue finding some action, and/or filling the cooler. The fall trout stocking is also set to begin this week, and the shop is fully stocked up with just about anything you’d need for the fall season!

Connor, at Tall Tailz Charters has been trying to switch over to fall tautog fishing, but the big bass bite just won’t quit! They’ve been seeing big schools of 30 to 40-inch bass crushing bait on top, along with some big bass on the troll and jig. A few more false albacore and bonito have shown up this week to help round out the light tackle catches. The few tautog trips that they’ve made have been outstanding, with plenty of quality fish around. They’ve been getting easy limits and releasing many of the bigger girls. The heart of the fall season is just about here, so be sure to check with Connor for a trip asap!

Jay, at Pamela May Charters in Narragansett, was also happy to report that the beat has not just gone on but has also picked up for false albacore anglers across Rhode Island. A nice push of Alberts have invaded Narragansett and can be found in most of their usual haunts. If the albies aren’t cooperating, you should still find plenty of action, including mackerel, small bonito, and stripers to 30-inches or so. The bay has also been alive with life, including copious amounts of bass and bluefish, along with some solid schools of false albacore and bonito. Bottom anglers can still count on sea bass all over the hard bottom, while those starting to target tautog are finding great results as well.

Dustin, at Rhode Island Kayak Fishing Adventures has been keeping his clients rigged and ready for false albacore and bonito this week, as they’ve made another push, and tend to at least make a quick appearance on most trips. Striped bass and bluefish have hit their mid-fall patterns and are aggressively feeding on peanut bunker. Most saltwater trips have seen plenty of bass and bluefish, along with some bonus albies and bonito. The saltwater trips are also seeing plenty of plenty of sea bass, and a daily uptick in tautog activity as the water cools. Freshwater trips have been consistent, with some nice largemouth moving into the shallows to feed before it gets too cold, and trout anglers patiently awaiting the fall stockings, which should happen any day now. Dustin still has some available dates for both shore and kayak trips, so book soon before the fall run passes us bye!

Heather, from Black Hawk Sportfishing reports that the time is now to cash in on some great fall fishing. With the temperatures dropping and even more bait showing up, we’re in the midst of the peak of the season. They had a great week of fishing, which included limits of scup, loads of jumbo sea bass, and as many bluefish as you’d want during their combo trips. They’ve still had to contend with some rough weather, but most of the rough weather days have still translated into limits, as they have plenty of local/secondary spots they can depend on. They still have a few more combo bluefish/bottom fishing trips available, along with their usual trips, so be sure to check their website for reservations and weather updates.

Andrew, at Fishin Factory 3 in Middletown, told me that the Connecticut River has finally cleaned up and things are starting to fall into place in terms of fall “normality”. The mouth of the river is holding a very consistent striped bass bite, with fish from 20-40 plus inches taking soft plastics and topwaters along the flats and on the adjacent reefs just outside. Those pounding the river are also reporting some good numbers of snapper bluefish, along with some slammer blue crabs on most days. The false albacore continue their trend of being here one day and gone the next, but the better reports continue to come from the Rhode Island beaches and Block Island. A few solid reports of hardtails in eastern CT and along Fishers have also come in, but once again, the consistency from day to day makes it a gamble. The porgy bite remains tremendous for shore and boat anglers, with the preferred bait being sandworms; while the Rhode Island tautog bite is picking up, with the CT season right around the corner. The shop is fully stocked with crabs, jigs, rigs, and any other tackle you’ll need for the whitechins, so be sure to stop in and stock up!

Mike Roy of Reel Cast Charters told me that the striper fishing has been consistent, and has improved even more this week, with a nice slug of fish showing up in his local waters. Mike and the crew have found a steady bass bite on jigs, soft plastics, live bait, and topwater offerings, oftentimes using live bait to get fish to come up and rise for topwater offerings! The gator bluefish haven’t left the area yet either, in fact it’s the opposite, with plenty of choppers hanging out in the area and taking just about anything you’ll throw at them. The black sea bass fishing has remained steady for those looking for meat, and Mike has some openings for the CT tautog season, which is right around the corner. Be sure to contact Mike for a trip ASAP, before it’s too late!

Captain Chris Elser, of Elser Guide Service, is continuing to battle the winds, but was able to get out on the grounds for a couple of trips this week. While trips were limited, he was pleased to report that he was able to manage his first Western Sound false albacore. Now if we can just get a few days of settled weather, things should really start to blow open. He also mentioned that there is no shortage of stripers out his way, especially in the mornings, and the bluefish bite has remained consistent all day long, regardless of weather.

Rich, at Fisherman’s World in Norwalk, reported that the bass fishing out west has started to fire up as the surface temperatures finally start to drop. Boat anglers are finding some better bass on jigs and on the troll around the deeper reefs. Shore bound and inshore anglers are reaping even more benefits from the recent cooldown, with some strong topwater action during the low light periods around dawn and dusk. The area around the islands and along the local beaches have come alive with small bait, so small spooks, small swimming plugs, and tins have been getting the job done. The albie reports have been spotty, but they started to improve once that east wind died down. Some of the largest scup in years have been coming through the shop, with 16-18-inch fish becoming a daily occurrence, and they are being taken on all the local hard structure regardless of depth. Sea bass action has also remained steady, and the shop is preparing to be fully stocked for the CT blackfish opener.

As we continue to navigate some tough wind forecasts, true signs of fall are starting to show up. The days are getting shorter, the weather is getting cooler, and an influx of small bait has helped to kick the bite into gear. The Rhode Island beaches and bays are chock full of striped bass and bluefish, and while the hardtail action isn’t what we all hoped for, it is certainly trending in the right direction. The false albacore and bonito bite is still hard to predict from day to day, but there have been a lot more “good” days recently than in weeks past.

Connecticut anglers should also be gearing up for the fall run, with strong reports of bass and bluefish in most of their fall haunts, along with enough false albacore reports to keep things interesting and keep angler’s hopeful. Scup and sea bass action has and will remain, steady across southern New England, while the abundance of crabs at the local shops is surely a sign of the strong fall tautog season in Rhode Island and the upcoming season in Connecticut. Some nice market cod are rounding out the catch for bottom anglers, while those sticking closer to home are still filling buckets with quality snappers and blue crabs.