The concern is the heaving seas which are at our doorstep but there is relief in the form of river systems. It looks as if its last call for bluefish as they appear to be on their way southward. Not all is bad in that front, however, as those who are on the hunt for mackerel are reporting that they are back inshore without having to worry as much about rapacious predators.

Scads of squid among lit piers, marinas and even under bridges from Seabrook up through Kittery have been striper magnets. Some of the fattest striped bass can be found around that preferred bait source making the moniker “squid hounds” an apt description. Schoolie surface feeds in the harbors as well as Great Bay have become increasingly common. Eels and soft plastic stick baits cast off the Salisbury jetty and beachfront have been working well and odds are that last crack at a bluefish awaits you should you troll a Rapala CD18 or X-Rap in 30’ plus along the Salisbury Beach front.

Captain Andy of Adventure and Catch Charters has had a lot easier time finding mackerel for bait, historically at this time of the year they are often as close in as the 2KR Can, Hampton Shoal Ledge and out through the Isle of Shoals. In this case it’s a case of less equaling more as less bluefish are making for a safer passage for mackerel inshore. Should you head out to the ledges such as Tantas, Platts or Jeffrey’s you’ll find the shallows swarming with dogfish. The dog kryptonite according to Andy is to find the sanctuary of deeper water – 300’ where you’ll find wiling hake and pollock with the latter suspended as shallow as 150’! Recreational tuna have moved onto the ledges so should you have a permit, you may go home with the gift of a tuna! Regardless of your next move, bait should be no problem with squid swarming marinas and mackerel close in.

For the first time in a while, Maine reports are lacking in the bluefish department. However according to Captain Lou of Diamond Pass Outfitters, all is not totally lacking regarding “blue” reports as school bluefin tuna have moved west of the Gulf of Maine putting properly permitted anglers onto mid-40” fish. The same pelagic phenomena is happening on Stellwagen Bank also. Just in time for the swells is the resurgence of upstream and inshore striper fishing thanks to migrating river herring fry and other small forage in estuaries and rivers. Topwater action has been terrific with Albie Snax, Evo Bass baits and Jumpin’ Minnows. Flies are ideal for the matching the hatch of such small prey making EP Baitfish in white and grey deadly. With the disappearance of blues, mackerel have reappeared in shore making a live mackerel in Saco Bay, Wells Harbor and Casco Bay a best bet for a big bass. The other cow option is eels and GT soft plastics off beaches. 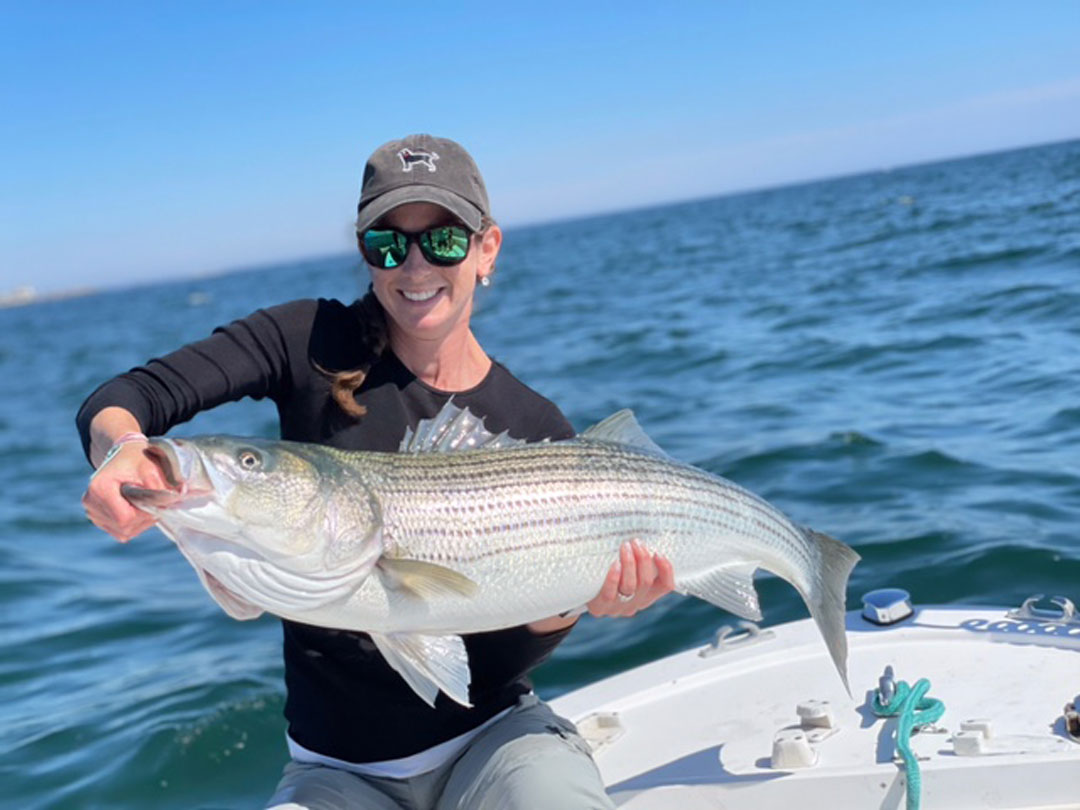 Brandy from Webhannet Bait and Tackle said that some of the better charter captains are targeting stripers feeding on squid at night! She told me of an absolute pig of a bass which was caught by Breakwood Charters that measured 41”, 40 pounds. Not surprisingly many who see the picture call that fish the fattest striper they have ever seen and it was stuffed with squid! Squid can be found near lit piers and bridges from the Piscatagua River all the way up to Cape Neddick and the Cliff House. Mackerel can now be caught right off the Wells Harbor jetty and those live-lining them are catching slot stripers and some bigger! The groundfishing on Jeffrey’s, pre-heavy seas, was awesome with the only caveat the volume of blue sharks which haven’t been reluctant to rob anglers of their catch. A fast-retrieving reel may help!

It’s last call for a shot at a bluefish with a trolling plug between Salisbury and the mouth of the Merrimack your best bet. Squid are thick among lit docks, piers and bridges, and preying on them are some of the most sated stripers you’ll ever see! Herring fry on the way towards the sea are getting slammed by stripers at the mouths of runs supporting river herring. For a shore shot try live-lining a mackerel off the jetties of Rye and Wells Harbors. Groundfishing remains good but to avoid the scourge of the dogfish, stick to the deep dropoffs off offshore ledges. Bring a tuna rod/permit with you as recreational fish are more than just a rumor.