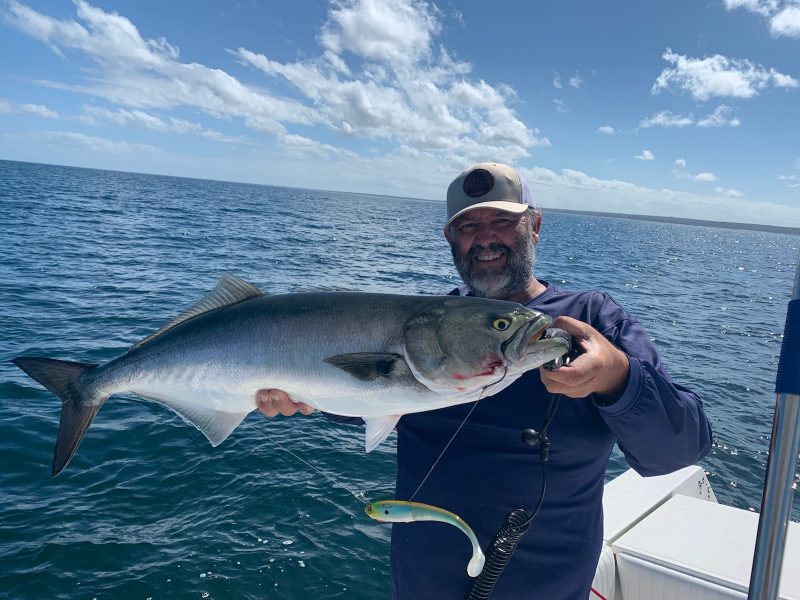 Above: Patrick Sebile of A Band of Anglers went fishing with OTW’s Chris Megan on Tuesday, and found plenty of big blues with some stripers mixed in.

StriperFest is back for 2021, and it’s happening this weekend at Falmouth Harbor. There will be live music, cold beer, hot food, striper fishing seminars, and, if you entered the Striper Cup, a chance to win a Northcoast Boat.

The fishing is reliably good StriperFest week.  The third week of September is often when a big school of bass makes a move south through the Canal, and from the sound of things, that happened earlier this week. Peanut bunker have been filling in the Canal since late August, and just when it seemed like the Big Ditch couldn’t handle one more juvenile menhaden, a school of big southbound bass moved in. I saw a video taken by a dogwalker, posting to a non-fishing related Facebook group about all the “splashing” they were seeing in the Canal. The video showed whitewater from one side of the Canal to the other as stripers, from schoolies to 40-pounders, feasted on the small baitfish.

Things slowed substantially by Wednesday, though fishermen were still catching a few bass, and some big bluefish, particularly in the East End.

Before the Canal blitzes, bait, blues, and stripers had been amassing in Cape Cod Bay, with some very large bluefish stealing the show. Blues were reliably found feeding on the surface, and while they could be coaxed to eat topwaters, they were much more receptive to sub-surface baits.

Albie fishing was very good on Monday, reported Evan at Eastman’s Sport and Tackle. The best fishing seems to be bouncing between the Elizabeths and Mashpee, and Buzzards Bay still sounds like it’s lacking in albies. The albie fishing does vary from day to day. Monday, by all accounts, the fishing was on fire as the albies feasted on large anchovies. On Thursday morning, it was a good deal tougher. The albie run is show no signs of slowing yet, though.

Evan also heard of improving striper fishing. Fish to 37 inches were caught along the Elizabeths this week, and he’s been selling more eels to fishermen heading that way.

Snapper bluefish are thick in the bays and harbors providing a fun ultralight option, especially for kids. A piece of squid or a live minnow or spearing fished under a bobber is all you need to catch snappers, but a small Kastmaster, the same type you’d use for trout, is another great choice.

Tog fishing is getting started, but it’s not yet in full swing, said Evan. A friend of his who dives saw a good concentration of good tog on a recent dive in Buzzards Bay. Fishermen are catching on green crabs, but that fishing should only improve as the water temperatures begin to fall.

There are still Spanish mackerel around, and once in a while, someone hooks a king mackerel. These have been more of a bycatch for anglers targeting albies and blues.

The tuna fishing remains excellent. There are lots of recreational-sized tuna being caught on the troll east of Chatham, there are yellowfin and bigeye in the Canyons, and there are giant tuna spread along the backside of the Cape and into Cape Cod Bay.

It’s peak fall run time here on the Cape. The stripers seem to be focused on larger peanut bunker, so if you can find those big baits, you have a good shot at finding some good bass. The bluefish are also around Cape Cod Bay, and they are large. Even shore fishermen are getting shots at the big blues. Poppers and metals are good choices for the bluefish right now. For stripers, a variety of plugs are working. Pencil poppers are working during the day, along with swim shads and paddle tails. At night, darters, eels, and needlefish are catching.

And don’t miss StriperFest this Saturday at Falmouth Harbor. You can find more details, here.