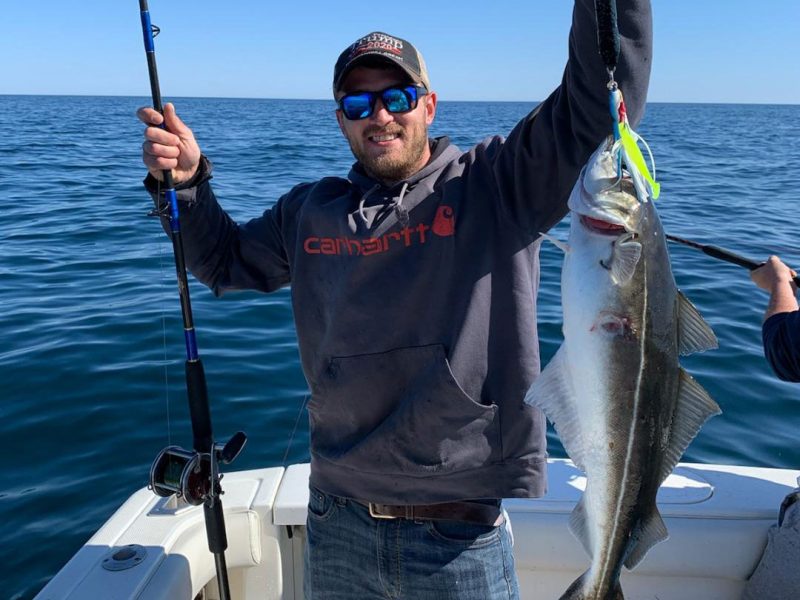 Now could be coined “the most wonderful time of the year”! With every tide more and larger linesiders will flood into local environs. There aren’t many moments when you can reasonably assume that tomorrow’s fishing will be better than today! Groundfishing remains great with pollock, haddock, cusk and redfish resulting in a real offshore grab bag!

While Tim Moore from TimMooreOutdoors along with other salmon sharpies await the thermocline to set up on Lake Winnipesaukee, shoaling smallmouth bass are making for a nice consolation prize. Tim’s been guiding patrons into pitching wacky-rigged Senkos along with topwater lures. As to how he is doing, he told me his picture count the other day was over 40 for fish to over 3 pounds! Meanwhile the flounder bite in Rye Harbor could be better with Tim recommending the Hampton River, Pepperell Cove and York River as better blackback bets.

Stripers up to 30” have been caught in Little Bay. Captain Andy from Adventure and Catch Charters has been doing well on haddock, pollock, redfish and cusk on the Northeast Hump of Scantum. Provided that you can affect a controlled drift that seems to be the best recipe. Pollock have been suspended between 80-120’ of water in 180’ depths. For those who enjoy haddock, it’s like heaven out there with numerous 26-28” fish! While poking around for stripers, Andy has been finding them in the Piscataqua River by the power plant area which is on the western bank in Portsmouth.

Captain Jon Tregea of Sea Run Charters says that this is the best time of the year for aspiring fly fishers to work on their casting/catching chops while hooking some nice fish and Jon is just the skipper to pull that off! Fresh from the migration the fish are aggressive and hungry and perfectly suited to a 6-8 weight rod and small, easily worked wares. The New Castle and Kittery areas have a lot of fish at the moment but expect them to move into the bay soon!

• Want to get in on the bite? Find an OTW-approved Charter Fishing Captain for New Hampshire

Brandy from Webhannet Bait and Tackle/Boatyard said that she and Scott have been catching stripers up to 23” right off the wall near the shop. Anglers trolling a tube and worm have been catching well from the Saco, Webhannet and Mousam Rivers. Macks while spotty are increasingly becoming more of a factor. One trick is to toss a live mackerel near herring runs; no self-respecting striper can resist one even when they are focused on herring. Flounder have been found at Elliot, Perkins Cove, Ogunquit and York.

Captain Cory Leduc of Mainely Blue Charters said that Casco Bay has building numbers of stripers, especially in the rivers. Mackerel are hit or miss at the Casco Bay Islands but anglers putting in the time acquiring this bait are chunking them up for haddock as well as a good pollock in 170-180’ of water on Jeffreys’ Ledge. The bite has been best when the tide is moving. Beginning June 1st, Captain Cory will begin chasing “Charlie” which is his specialty – get ready!

Peter from Saco Bay Tackle Company said that he received word of a 40” taken on a live herring by the Skelton Dam on the Saco River! Was this a holdover or an early-season surprise? Bays and river systems are loaded with fresh linesiders with Lonely Angler spooks, Super Strike poppers and Hogy Split Tails all working well. Mackerel can be found by the Saco Bay islands. One angler taking them in and working them by Higgin’s Beach did especially well.

The mouths of rivers are still fishing best for striped bass but there are some signs that the allure of an alewife snack is drawing larger fish upstream where they can pound the herring up against structure. Mackerel are a bit spotty but the payoff, once the bait is found, is high regarding stripers and groundfish. Higgins Beach has been hot for macks as have haddock and pollock on Scantum Ledge. For a flounder foray, Peperell Cove and Perkins Cove are two of the top tickets.