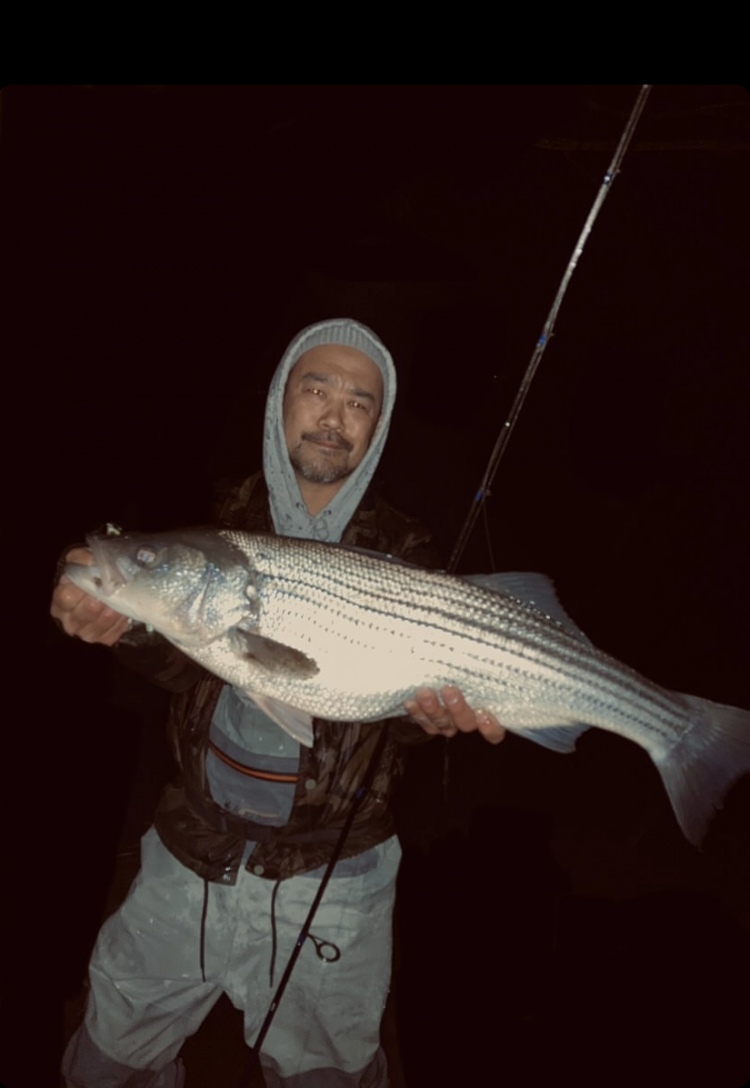 Big porgies, ling, cod, and pollock are all biting well aboard the party boats. Opening day for winter flounder and reports are positive. Big schools of bunker moved into back bays all around the island this week. Gannets are following. Holdover stripers have been on the feed. Some big ones were feeding before the full moon. Western Long Island has a decent number of bass, and they should be moving eastward soon enough. Trout stocking occurred, and the fishing for them has been great. Predatory freshwater fish are biting along the banks. Some egg-laden bass have been found on beds.

Frank, from Bernie’s Bait and Tackle in Brooklyn, says the stripers have been chewing in Raritan Bay the past week. This is the same pattern as the past several years, with mostly smaller fish inundating the back bays. Frank even heard one or two rumors that there were some bluefish in the mix. There has been some striper action locally as well. Like we said, it’s mostly small fish, but Frank caught wind of a few good outings in the bay; one guy had a dozen bass to about 30 inches. On the flounder front, there’s some conversation occurring about a bite near the sea wall. It’s not intense action, but the fish are around. Typically anglers will start-up in the silver hole area. There’s deep holes and shallow areas, and on the warmer days the flounder will make their way shallow. Herring have been moving in towards the piers on the warmer days as well. Canarsie, Coney Island, and 69th Street piers have seen some action, but not much but enough to write home about. The anglers who fish for them are buying gear, and they wouldn’t be unless there was a serious expectation of catching. Bunker has moved into the area in huge numbers. Bernie’s has all the baits you could need this time of year: mussels, bloodworms, sandworms, etc.


Paul, at River Bay Outfitters in Baldwin began hearing reports from the western waters on Long Island this week. The Raritan and Jamaica bays are seeing some fish being hooked from both shore and kayak. Paul says they should be in his area’s back bays in the next week. There’s so much bunker around, so the stripers will sniff them out soon enough. Plus, the weather this next week is looking pretty great. The freshwater scene on LI is super fishy, as all stocking waters were just filled with trout. Largemouth and pickerel have been chewing, and the carp fishing is picking up. Some people are heading upstate to trout fish, and reports state small black stoneflies coming off the water. Unfortunately, the Catskills are going to see some wet snow this week, so that should dirty up the river.

Point Lookout’s Superhawk did well on their recent offshore wreck trips, with catches of cod, pollock, ling, jumbo porgies, hake, and more. They’re sailing every day the weather is nice. They’re planning for two trips on Friday, one at 4 am, and the other is an extended overnight trip leaving Friday night. Call Capt. Steve today to make a reservation: 516-607-3004.

Captree’s Laura Lee sailed to a deepwater wreck this Tuesday, and put a hurting on the fish. On the 18-hour trip, they caught 390 giant porgies, 71 big ling, three cod, and four pollock. The other trips this past week were more productive on the codfish end. Thursday and Saturday’s trips saw 19 and 24 cod, respectively. A couple other big silver eels came over the rails those two days also. 15 pollock hit the deck on Saturday, and one fish that I had to google, a Sea Raven, got hooked on Saturday. The sea raven is a bottom-dwelling crustacean cruncher, which looks like an angry, bulbButous sea robin who made some poor life choices.

Lindenhurst Bait & Tackle bids tight lines to the trout fishermen participating in opening day! “We’re freshly stocked with nightcrawlers, red wigglers, wax worms, and mealworms. Flounder season opens too, so we have bloodworms, clam chum, and fresh mussels. For those targeting tautog we have all the jigs and green crabs to get things going. Looks like some warmer water temps for this time of year so it’s going to be an early start. Let’s bend some rods, winter is over!”

Bill at Chasing Tails Bait and Tackle in Oakdale says, “spring has sprung and the smell of fish is in the air. April first marks the opening day of trout season in New York and it’s already looking to be a solid season. Early stoneflies are moving, as well as a few baetis and caddis. The real hatches should start any day. I will be up in the Catskills this weekend giving it a shot. The island is stocked with trout, and they are active! Fish are sipping drys and chewing nymphs hard already. It’s been a long winter, and they’re ready for us. In the salt we have flounder and tautog, as well as striped bass right around the corner. The local stripers are actively feeding all along the flats, with some solid slot fish already coming over the rails. Poppers, Mag Darters, and jigs are getting smashed up. Tautog are big and plentiful this time of year, and crunching crabs hard. The flounder don’t have too much pressure these days. If you can get on them, they are a blast on light gear. The weather is cooperating too, so fishing will just get better and better each day.”

Steve at Cow Harbor Bait & Tackle in Northport, says there are some people running west and hooking up with some stripers. They’re mostly on the small side, but he’s heard of a few slot-size bass being caught and released. The local bay and harbor areas haven’t been producing as well, partly due to the prevailing southeast wind and its resultant low water. A few fisheries are opening up today, so we’ll be looking forward to seeing some reports over the next week on those fronts. Striped bass season opens in a couple of weeks. The shop has been gearing up for it, tying circle hook rigs and educating their customers on the new 2021 regulations regarding bait fishing for stripers.

Surfcasting guide Bill Wetzel of Surf Rats Ball broke the ice this week with a first light session on the north shore. An olive darter convinced two small schoolie bass from Nassau county waters to strike. The action was slow and the fish were small, but who can complain about a successful first trip of the season?! Good fishin’ Bill. If you want to learn more about surfcasting for stripers, and perhaps spend an infinite amount of time reading on the subject, the SRB is the place to go.

Steve from Rise Fishing Company ran upstate to target trout in the great lakes tributaries this week. He said the steelhead were dropping back into the lake, and the fishing was decent. He lucked into a few steelhead and a big, old, hyped-up brown trout.

Chris Albronda in Montauk says spring has sprung on the end. Large bunker schools have moved in, with gannets, whales, and dolphins giving chase. The commercial fishermen have sporadically sighted and marked giant bluefin tuna over the past few weeks. There are large schools of bay anchovies being eaten by Boston mackerel, who have occasionally found their way into the inlet. There were some whispers of a pick of bass on the beach. Chris lucked into one, but a seal intercepted the fish before it hit the beach.

For me, it’s largemouth season. I’ve spent many Aprils chasing stripers, hoping for the pre-season keeper bass that’s done such a great job of eluding me. I got my saltwater fix big time these past few months, and I am willing to focus more time on the sweetwater as a result. This is, after all, prime time for freshwater fishing.

Jimmy O’Brien came across his likely PB green bass yesterday, and lost another behemoth before the day was done. The fish was fat from rampant feeding, and appeared to be egg-laden as well. He reckoned the largemouth was between 6 and 7 pounds.

I lucked into one of those better specimens while tossing a chatterbait the other day. It looked to be around five pounds when I got it on the bank. I lost two others that I felt a lot bigger (it’s always the one you lose that’s the biggest though, isn’t it; funny how that goes). I caught many more quality bass on the chatterbait, and plenty of smaller ones using other baits.

This next week is going to be productive. I plan on targeting and catching some big freshwater fish. I’ll begin putting in more time at night, after the warmer days. All the other freshwater fish are chewing pretty well at this point, so it’ll be tough to go wrong there, especially if that water has been stocked with trout!

Stripers will fall by the wayside for me, as I mentioned, but I’m sure the fishing for them will be great. I half-expect there to be fish in the surf this week; and now that I mention it, I’ll definitely keep one eye on that specific arena.

If you want to get your striper fix, by all means, do it up. While it’s still pre-season, though, you ought to be throwing single hook lures to ensure an easy release. If you’re throwing a plug, lose that rear treble. It takes thirty seconds to do, and it should be done. I gather that anglers are catching stripers all over the island, west and east, north and south. My friend Pete Leary had a near-keeper on the fly in Jamaica Bay this week, and anglers are catching them all along the east end. Enjoy these fish, and take good care of them.

I’ve got a good feeling about winter flounder you guys. It’s probably unwarranted, but it’s there. Take my good feeling with a grain of salt, but if you have any desire to target them, I’d love to hear how you do.

Don’t forget, I’m giving away a bunch of sand flea jigs and/or flies to people who submit a comment to the ASMFC regarding the Striped Bass PID. Just send me a screenshot of the letter, or confirmation that ASMFC received one, and you’re on my list to win one of those lures. Thanks to all who participate. Find me on Instagram at @SouthForkSalt or email me at tkregan12@gmail.com.