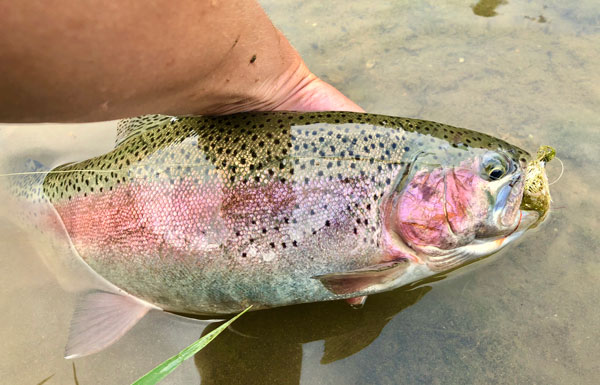 Cory, with the Frances Fleet in Narragansett, says their boats have been at the dock for over two months because of the weather patterns. He’s hoping for a break and a swing in water temperatures.

Nick, at Big Bear Hunting and Fishing in Chepachet, says fishing has been pretty slow all across the board. A few customers are catching nice largemouth with shiners and jigs. Striper fishing has yet to pick up, but several customers have been trying their luck, to no avail.

Evan, at Black Hall Outfitters in Old Lyme, says the fishing continues to get better, coinciding with the early opening of trout season to reduce crowds. Trout fishermen and women can target trout in all waters, but Trout Manager Areas and Trout Management Lakes are strictly catch and release. CT Fish and Wildlife will be stocking trout all the way through mid-May. Evan says the best fishing is at the TMA’s and TML’s – the top producers are mealworms, flies, and spinners. Transitioning to saltwater, winter flounder were caught on sandworms, and the holdover striper fishing at the Housatonic River continues to produce. Swimbaits on jigheads are the most consistent lure for holdovers.

Greg, at New England Dive in Wallingford, says a couple of customers are picking off some nice smallmouth on the Connecticut River with hair jigs. Trout fishing continues to hold steady even though the local ponds haven’t been stocked yet, according to Greg. The most common baits have been PowerBait and mealworms.

The water temperatures at Quonset Point are 41 degrees, so for time being, largemouth bass, white perch, and other freshwater species are the best option. The headboats will become more active in the upcoming weeks as highs starting climbing into the 50s. Trout season is currently closed, but you can still fish non-stocked waters.