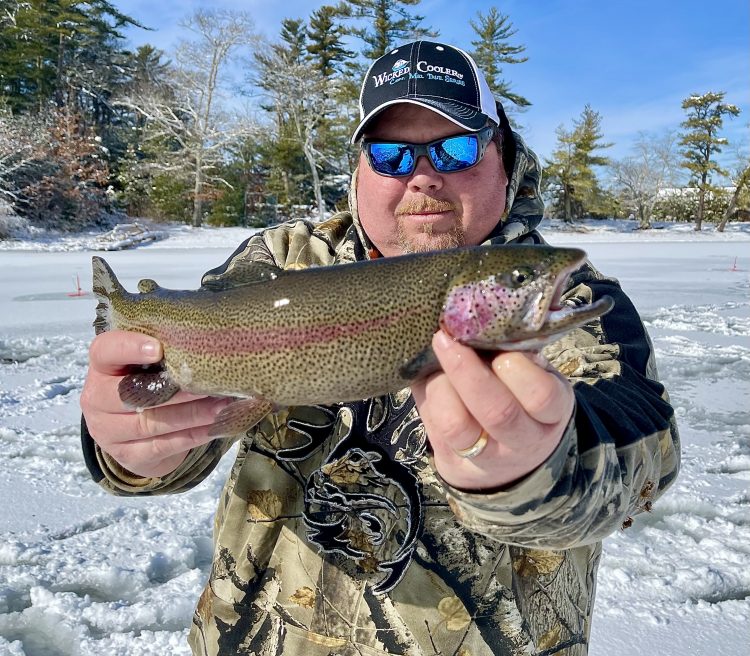 Captain Mel True with a rainbow trout caught on a jig through this ice this week, just off Cape.

Little has changed on Cape Cod in the past week. Trout ponds like Peters had enough open water to fish early in the week, and the smaller ponds had too little ice to fish on.

The ice is questionable right now, and because of the layer of snow on it, the thickness can be difficult to judge. We have some two more cold, cold nights forecasted between Thursday and the three-day weekend, and that should help put fishable ice on some ponds. Regardless, put safety first when venturing onto the ice. I’ve been checking some of the ponds around my house this week, and have found the ice thickness to vary significantly from pond to pond, and even on the same pond. Bring a spud bar to check the ice in front of you as you go.

Just off Cape, around Plymouth, fishermen were able to get on the ice this week, including Captain Mel True, who we usually hear from during the saltwater season. Mel said the trout fishing was on fire on Thursday, fishing jigs and watching the trout attack them.

Ger and Gus Khang got onto the ice again last weekend, finding some better ice conditions off Cape. Gus capped off his weekend with a nearly 6-pound largemouth!


My fishing this week was limited to a short outing at Peter’s Pond on Sunday, where an otter was swimming figure-8s in front of my for most of the trip. I also tried soaking some clams in the east end of the Canal on Saturday night. The wind was nonexistent and the temperatures were mild – it felt more like a night in October than in February. But my clams failed to entice a cod or any cold-water fish in the couple hours around slack tide when I fished.

If you plan on ice fishing this weekend, you’ll probably want some shiners. It’s wise to call ahead to the shops to confirm they have some in stock. As of Thursday afternoon, Evan at Eastman’s Sport and Tackle in Falmouth was well supplied with shiners, as was the crew at Red Top Sporting Goods in Buzzards Bay.

What is proving more difficult to find is ice fishing gear, like tip-ups, line, and augers. I went to Bass Pro in Foxborough over the weekend, and found their ice fishing selection in a sorry state. I ended up in Natick, where I was able to get a set of tip-ups. It served to remind me that the best time to buy ice fishing gear is the middle of summer. But, who wants to think about ice fishing when the stripers and tuna are in town?

If you’re having in this weekend, you can watch the most recent episode of On The Water’s Angling Adventures. This episode, hosted by Chris Megan and Anthony DeiCicchi, took place on Buzzards Bay during the spring and early Summer sea bass run. The guys share lots of facts about the black sea bass, and plenty of tips on how to catch them, and have more fun doing it. And on Sunday at 10 on NBC Sports Boston, you can watch the new episode, fishing for stripers in the Monomoy Rips.

Be safe on the ice this weekend, keep checking the thickness, bring a rope and spikes in case it gives way, and go with a friend.