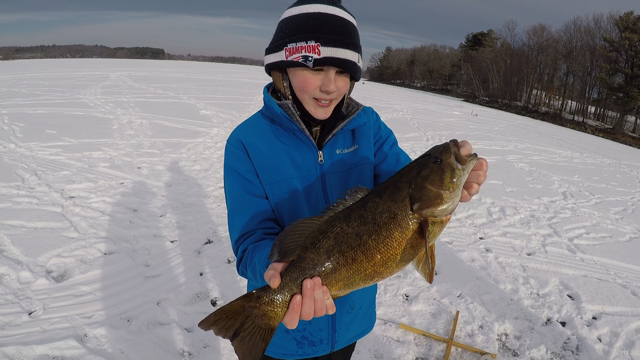 Favorable temperatures are having a corresponding effect on anglers’ ice-fishing fortunes as bigger lakes are finally beginning to catch. There is even word that at least one of Maine’s iconic smelt camps expects to be in business by next week!

Jim from AJs Bait in Meredith said that almost overnight additional parts of Lake Winnipesaukee are locking up. The latest is Meredith Bay, where shanties and even a tractor (tasked with clearing snow for hockey) have been observed on the ice! Most everything that swims in this big lake can be caught in Meredith Bay. Anglers are catching lakers and white perch in Center Harbor and there are reports of 5 inches of ice in the Long Island stretch on the right-hand side of the bridge. Regarding other water bodies, most of Newfound Lake has been good as has at least the north end of Winnisquam where anglers have been ice fishing.

Joe from Granite State Rod and Reel Repair said that a customer of the shop was reporting rainbows from the coves of Canobie Lake. He’s heard of some also fishing for trout in close at Cobbetts as well. Joe expects this cold snap to harden up any weaker spots in the middle of those two trout ponds. Meanwhile anglers are doing well with warm water species from Robinson Pond and Mill Pond. The former is a good choice for smallmouth bass as is Baboosic Lake for largemouth bass.

Tracey from Dag’s in Auburn told me that at least one of the smelt camps – Leightons – will be open for business beginning February 1. She continues to steer angler to Sabattus Lake for pike and the Androscoggin River for pike, crappie and smallmouth bass. The “other Andro,” Androscoggin Lake has, in addition to the aforementioned species, brown trout. Annually this place gives up some real corkers too!

Those looking to get out on the iconic Sebago Lake are loving the temperatures but hating the wind, which won’t let the big lake catch completely. Meanwhile according to Renee from Sebago Bait, anglers are getting their hardwater fix at Canton Lake, Long Lake and Thompson Lake. She’s also been hearing promising things about trout from the Ranges.

With favorable temperatures predicted for the foreseeable future, where to ice-fish should be moot, but meanwhile fresh ice on Meredith Bay in Lake Winnipesaukee makes that one of the better bets with the north end of Winnisquam a close second. For those who prefer pike, Sabattus Lake and the Androscoggin River are hard to top. The Androscoggin Lake has pike also with the added bonus of brown trout. Some however prefer the uniquely New England pastime of fishing for smelt and beginning next week it looks as if that option will be a go.