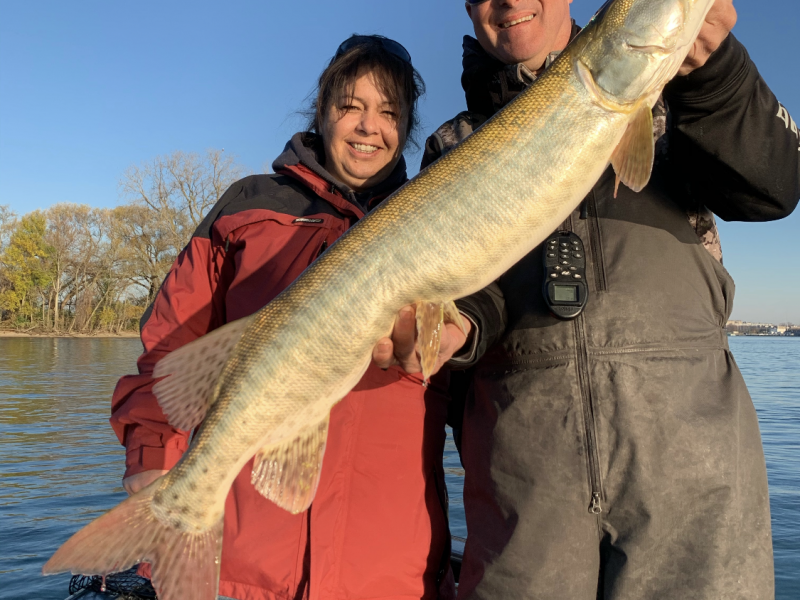 We are back to reality as far as the weather after 3 record-breaking high temps in a row. The recent rainfall could help the local tributaries.

In the upper Niagara River, Capt. Chris Cinelli and Capt. Connor Cinelli of Grand Island reported some dandy muskies this past week. Josh DeWyse of Michigan managed to catch a 46-inch and 52-inch fish this week drifting with Capt. Connor; Vanessa Antone of Lewiston managed to reel in a 42-inch fish with Capt. Chris. Drifting suckers on the bottom using a quick strike rig is the way to go.

The smallmouth fishery around the Coast Guard station and around Fort Niagara has been very good. The fish have been hitting just about anything, from live bait like shiners and minnows to tube jigs, swimbaits, Ned Rigs and drop shot offerings. Mike Rzucidlo and Mike Ziehm of Niagara Falls did well on bass in Youngstown tossing jigs for big smallies.

In the Tim Wittek Memorial Musky Tournament last Sunday hosted by the Niagara Musky Assn., Tony Scime was top dog with a 37-inch fish caught (and released) on a Red October Bait Ninja Tube. He was fishing with Louis Long. Second place was a 36-inch fish caught by Jim Reynolds while fishing with Joe Wilczewski. There were 18 participants.

Lower Niagara River trout and bass action has been the best according to Lisa Drabczyk of Creek Road Bait and Tackle in Lewiston.

Up toward Lewiston off Artpark, it has been a trout bite – lakers, steelhead and the occasional brown trout. Beads or egg imitations work best from shore, but jigs and No. 4 spinners will also catch fish, says Drabczyk. Boaters will also use chartreuse egg sacs and beads, Kwikfish and MagLip plugs off three-way rigs to take a mixed bag of trout. Not too many browns can be found in the lower section of the river yet, but you can target them on the Niagara Bar off the mouth of the river for more numbers using minnows. Remember that lake trout season is closed for 3 more weeks in the lower river and the lake. Bass season is open for 3 more weeks and then it reverts to a catch-and-release season.

Karen Evarts at The Boat Doctors reports that fishing has been good in places like Burt Dam at 18 Mile Creek, and other streams to the east for a mix of salmon, brown trout, and steelhead. Anglers are still waiting for the full effects of the water releases from the Erie Canal that started up Nov. 6. The salmon run is nearly over for kings but there are a few Coho salmon hanging around along with the occasional Atlantic salmon. Egg sacs, flies and beads are all working. Big jack perch have been hitting in a few spots at Wilson and Olcott, but the information is a little light.

The streams still need more precipitation to produce a decent flow. Maxwell Creek has been too dry on the south side of Lake Road. Fish the north side with bobbers and egg sacs.

Bear Creek has some action near the ramp. Salmon Creek in Pultneyville is the same, however, there is a limited area opened to the public. The browns are hitting egg sacs and bright beads.

Hughes’ Marina, two miles east of Pultneyville, has seen some brown trout action in the small ponds that are connected to Lake Ontario.

Anglers were casting into the Sodus channel. Some browns have been netted. With our warm weather hanging around and without Lake Ontario waves hitting the pier, now is the time to fish.

With temperatures in the 70s, bay fishing is almost a summer experience. That will change when temps will fall back to typical November patterns.

The perch fishing has been excellent. There are plenty of smaller fish, which is a good sign for the future. Use small jigs, live bait, or a 2-inch shad rubber, and tip your rig with spikes or perch eyes. Move around if you cannot locate the 12-inch perch.

Bass fishing in Sodus Bay has been great. Over the weekend they were catching bass near the weedlines close to shore. The regular season for bass ends Monday, Nov 30.

Remember the important regulation regarding life jackets. You must wear your PFD from Nov. 1 through May 1 if your boat is less than 21-feet. This means it must be worn, not in the bow of your boat.

Sections of the canal are now drained so they can work on the locks. Widewaters has open water and you can fish a large section if you launch at the county park.

Privately-owned marinas, boat launches, and many other recreational marine locations are now opened.

The official statement from New York State is made in conjunction with similar ones from the governors of New Jersey and Connecticut, is the latest change to the guidance from Empire State Development on what is and isn’t affected by the governor’s Executive Order 202, which ordered employers to reduce the number of employees working at individual locations to help fight the coronavirus pandemic.

The guidance regarding privately-owned marinas, boatyards, and recreational marine manufacturers allow for operations and boat repair/maintenance as long as the facilities “adhere to strict social distancing and sanitization protocols.”

However, watercraft cannot be used for charters or rentals, and any restaurant facilities there must remain take-out or delivery only.

While enjoying the outdoors, please continue to follow the CDC/New York State Department of Health guidelines for preventing the spread of colds, flu, and COVID-19:

When fishing, DEC recommends avoiding busy waters and following the guidelines on DEC’s website about fishing responsibly in New York State. If an angler arrives at a parking lot and there are several cars, they should consider going to another parking lot. If an angler is fishing upstream, they should fish downstream of the other angler or consider fishing another day. Anglers fishing from boats should be able to maintain at least six feet of distance between one another. For more information about the benefits of being outdoors safely and responsibly, go to DEC’s website.

New York State is open for fishing and DEC encourages anglers to recreate locally at a nearby waterbody. New York’s lakes and streams offer great opportunities for fishing in a wide array of settings across the state. Even during the current COVID-19 public health crisis, getting outdoors and connecting with nature while angling in New York’s waters is a great way to help maintain mental and physical health.