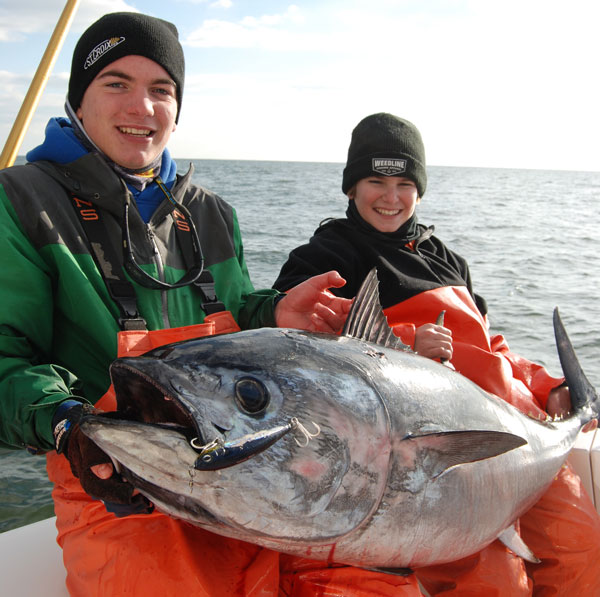 Die hard tautog anglers are cashing in on less boat traffic, but warm enough water to keep the fishing steady. Striped bass can still be found out front, and the masses that enter the rivers this time of year are starting to chew. Those who are done with the saltwater game for the year are finding prime fall freshwater fishing in the rivers and the lakes/ponds before they freeze.

The Frances Fleet in Point Judith reports that they spent more time tied to the dock than they would have liked this week, but when they were able to get out, the fishing remained solid. The tautog tips continue to be very productive, with plenty of limit catches and pool fish coming in around the 10-pound mark. The cod fishing has been up and down but has mainly been up whenever the conditions allow for a good drift. The toughest thing about good drift days is getting through all the sea bass and scup, but there’s nothing wrong with 4-6-pound sea bass and a nice mix of hubcap scup and cod. The weekend looks like a good one weather-wise, so be sure to make a reservation via their website!

Dave, at Ocean State Tackle in Providence, told me that talk of the town has been some big bluefin tuna, that continue to hangout in inshore waters. There aren’t many people with boats still in the water that are targeting these fish, so if you have the itch be sure to get out there ASAP! The tautog bite has been the most appealing for inshore anglers, as it remains strong, and the water has remained warm enough to keep some nice scup and sea bass in the mix. Freshwater anglers are cashing in on the recent trout stockings and reporting good results; while others are finding steady largemouth action throughout the state, along with increased pike action. Dave will be running a lure sale this weekend; buy 5 get one free and you can mix and match! He’ll be there from 530-1 on Saturday and Sunday; cash in while you still can!

Captain Connor, of Tall Tailz Charters in Newport, told me that jumbo tautog fishing has taken priority on most trips this week. Finding a decent weather window has been the hardest part, but when it’s settled, they are chewing! They have started to move a bit deeper and are there in big numbers. They’ve seen quite a few fish in the 7-10-pound range, and a few larger double-digit monsters in the mix. White and toxic colored tog candy jigs have produced very well, along with traditional snafu rigs on the deeper pieces of structure. They are also getting a healthy by-catch of cod on most trips, which are helping to fill the cooler. When the weather has allowed, they have also been targeting bluefin around the cape, and the results have been strong. They’ve managed fish from 30-80-inches on most trips, and those fish don’t seem to be leaving just yet. Be sure to book soon before it’s too late!

Captain Kelly, of C-Devil II Sportfishing, reports that other than a couple of bad weather days, the fall fishing continues to be great. There are still some straggler slot bass around the island and beaches, hitting the eels and plastics; while many of the larger bass have started to move into deeper water. Sea bass are still plentiful with easy limits, while the tog fishing is improving daily. The bigger tautog seem to be moving in, with multiple 8-10-pound fish showing up this week. Cod have also started to show up inshore, and they are finding a few on just about every trip. Be sure to check the online calendar for remaining dates through Dec 15th!

Andrew, at Fishin Factory III in Middletown, told me that the togging has remained very strong for those who have braved the (finally) cooler temperatures. Giant fish seem to be hard to come by, but most anglers are reporting limits. The harder hit areas seem to be fished out, but there are plenty of fish to be had for those finding rockpiles off the beaten path. Striper action remains very consistent in and around the lower river, but as the temps drop, the harder it becomes to find large fish. Freshwater anglers continue to report good trout fishing in the fall-stocked areas, including but lot limited to: Day Pond, Black Pond, Salmon River TMAs and Farmington TMAs. The Connecticut River is at much more appealing levels for pike anglers, who are reporting steadily increasing action over the past 10 days or so.

Heather, from Black Hawk Sportfishing, has been dealing with the same weather issues as most, but reports that the good days have been great! The bottom fishing trips have seen some excellent sea bass action, along with good numbers of scup and cod. The combo trips have been successful as well, despite big numbers of short blackfish. Most anglers have been able to weed through the shorts and find limits of blackfish, along with some stud sea bass and scup. They will continue to fish daily if the weather permits, so be sure to reserve a ticket as soon as possible!

Rich, at Fisherman’s World in Norwalk, reports that the blackfish and stripers remain the main game in town throughout the western sound. The stripers are on the move, and things have really started to pick up locally. Anglers are reporting great light-tackle action along the beaches and around the islands. Most of these fish are in the 20-30-inch class, but larger ones are coming through the area daily. The deeper structure in the area is producing 20-30-pound fish daily on fresh chunks and diamond jigs. Stud sea bass have also been common on some of the same deeper pieces of structure. The blackfish seem to have spread out to varying depths, but anglers fishing multiple depths are reporting plenty of keepers, with the largest fish coming from the deeper structure. It appears you want to target deeper structure, and you may be able to go home with multiple species if you dial it in right. Per usual, the pre-Thanksgiving bass bite has been strong in the Housatonic, so if you’re looking for some light tackle action, now is the time!

Captain Chris, at Elser Guide Service, told me his trips have been limited due to the wind, but the results have been strong, and the upcoming forecast is a good one. When he has been out there, the fishing has been excellent for school bass blitzing, and bigger fish coming through nearly every day. There is an insane amount of adult bunker throughout the Western Sound, along with giant schools of peanuts from Stratford to Bridgeport. Combine all that with the current water temperatures, and we aren’t done just yet!

Tautog fishing remains steady and is the main game for saltwater anglers. Some of the more common spots have been picked through, but some large fish are still showing up on some lesser fished pieces of structure. Sea bass are still in the mix on the deeper structure, and the cod numbers seem to be improving as well. The warm water has delayed the bass migration a bit, and blitzing fish of multiple sizes can be found throughout the area. Fall freshwater action is hitting its stride, with recent trout stockings providing some great action, along with an uptick in pike, bass and perch action.