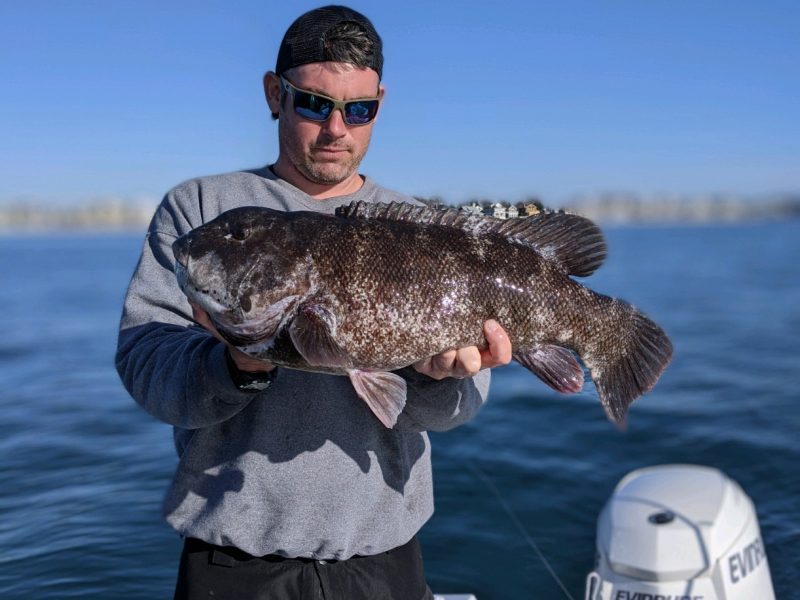 Primetime tautog season may be upon us, while sea bass and cod are rounding out the bottom catches. The stripers are continuing to chew as they gear up for the migration, while freshwater fishing is probably the best it has been since the spring.

The Frances Fleet in Point Judith reported some strong fishing over the past weekend and into the early part of this week. Captain Rich found some strong action on the full day trips, with many limits of big sea bass, along with some nice cod catches into the low 20-pound class. The blackfish boat also found some success over the weekend, with Captain Mike hitting some secret spots in order to avoid the crowds. High hook anglers caught over 20 keepers, with plenty of fish over 7-pounds and some brute pool fish over 10-pounds. Things got a little trickier early this week, but they were still able to put together some nice blackfish catches of fish to 7-pounds. The weekend weather looks good, especially after Saturday morning, so be sure to reserve a spot asap!

Dave, at Ocean State Tackle in Providence, told me that the tautog fishing remains excellent, especially after the recent warm spell. Consistent keeper catches of fish to 12-pounds have been coming from most of the rocky shoreline and in the lower bay. There is still quite a bit of bait in the bay, including mackerel, which have caught the attention of some small bluefin tuna close to home. The bluefish have started to thin out, but small to slot sized striped bass are still prevalent in the bay and around the breachways. Fall trout stockings have happened and Dave has all your trout needs covered if you’re looking to enjoy some freshwater action before the winter.

Captain Connor, of Tall Tailz Charters, told me that jumbo tautog fishing has taken priority on most trips this week. Finding a decent weather window has been the hardest part, but when it’s settled, they are chewing! They have started to move a bit deeper and are there in big numbers. They’ve seen quite a few fish in the 7-10-pound range, and a few larger double-digit monsters in the mix. White an toxic colored tog candy jigs have produced very well, along with traditional snafu rigs on the deeper pieces of structure. They are also getting a healthy by-catch of cod on most trips, which are helping to fill the cooler. When the weather has allowed, they have also been targeting bluefin around the cape, and the results have been strong. They’ve managed fish from 30-80-inches on most trips, and those fish don’t seem to be leaving just yet. Be sure to book soon before it’s too late!

Captain Kelly, of C-Devil II Sportfishing, reports that other than a couple of bad weather days, the fall fishing continues to be great. There are still some straggler slot bass around the island and beaches, hitting the eels and plastics; while many of the larger bass have started to move into deeper water. Sea bass are still plentiful with easy limits, while the tog fishing is improving daily. The bigger tautog seem to be moving in, with multiple 8-10-pound fish showing up this week. Cod have also started to show up inshore, and they are finding a few on just about every trip. Be sure to check the online calendar for remaining dates through Dec 15!

Andrew, at Fishin Factory III in Middletown, told me that the striped bass fishing seems to have picked up around the mouth of the river, but most of the fish are under 28-inches. A few bigger fish have been taken on larger topwater plugs, but the best number of fish are coming on small soft plastics on jigheads. Blackfish action has slowed down a bit overall, but it remains strong. Anglers that got off the beaten path and are fishing lesser known spots are still finding some large fish. Freshwater anglers are reporting good trout action from Day Pond and Black Pond, along with the Salmon River TMA. Carp action remains strong throughout the CT River, and the pike fishing seems to improve a little bit each week.

Ted, at Three Belles Outfitters, told me that the local saltwater bite has been up and down this week, likely due to the unseasonably warm weather. School bass and hickory shad remain plentiful, but some days require a bit more work to locate them than others. Action in the Niantic River has slowed, but some decent bass are still hanging around Black Point and Hatchets. Small soft plastics on light jigheads seem to be the ticket when larger offerings aren’t getting the job done. The tautog bite remains steady, with some quality keepers coming from the Two Tree and Bartletts area. The largemouth bite has been decent in most of the lakes and ponds; while the Connecticut River is fishing well for pike, smallmouth, yellow perch and white perch.

Mike Roy, of Reel Cast Charters, told me that the stripers are schooling up and they are on the feed. These fish are likely gearing up for the migration, so you’re going to want to cash in on them asap! The bottom fishing remains consistent as ever, with great blackfish and sea bass action. Mike will be running until the 20th, so if you would like one last shot be sure to contact him asap!

Heather, from Blackhawk Sportfishing, reports some great fall fishing to go along with the great fall weather we had during the earlier part of the week. Their bottom fishing trips saw some excellent sea bass action, along with solid numbers of scup and cod. Their combo blackfish/bottom fishing trips involved picking through a bunch of shorts, but they were able to manage plenty of keepers. The will continue to fish daily if the weather permits, so be sure to make a reservation, as they are required at this point.

Rich, at Fisherman’s World in Norwalk, reports that stripers and blackfish remain the biggest show in town at the moment. Bass blitzes have been pretty common right off the local beaches from Fairfield to Darien. There are still some larger bass and gator bluefish in the deeper waters around 11B, 28C and the OB, and they can easily be fooled with diamond jigs. The best blackfish bite remains in shallow water due to the recent warmer temperatures, and shore catches remain strong. Freshwater reports have been on the quiet side but the Saugatuck TMA was recently stocked, so that and the reservoir should be fishing strong in the coming weeks.

Captain Chris, at Elser Guide Service, told me it was a great week full of some fresh bass and bluefish coming through the Western Sound. A large mass of slot sized bass has been feeding on peanuts in 20-30 feet of water and are providing some great light tackle and fly action. Larger bass continue to move through daily and can generally be found around the schools of adult bunker. Some gator bluefish remain in the mix as well, with fish to 12-pounds this week. The fishing should remain strong right up to Thanksgiving, despite some upcoming cooler temperatures.

Tautog fishing remains steady and is the main game for the saltwater anglers. Some of the more common spots have been picked through, but some large fish are still showing up on some lesser fished pieces of structure. Sea bass are still in the mix on the deeper structure, and the cod numbers seem to be improving as well. The warm water has delayed the bass migration a bit, and blitzing fish of multiple sizes can be found throughout the area. Fall freshwater action is hitting its stride, with recent trout stockings providing some great action, along with an uptick in pike, bass and perch action.